"Who's Better Than Rand Paul on Racial Injustice Issues"? 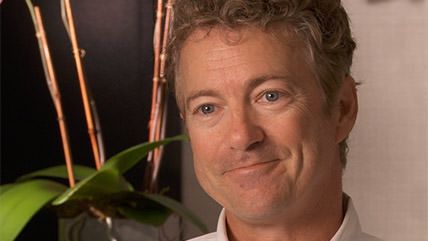 When Sen. Rand Paul (R-Ky.) took his nascent presidential campaign to South Carolina yesterday, MSNBC host Rachel Maddow castigated him for not specifically talking about the fatal police shooting of Walter Scott during his speech at the U.S.S. Yorktown. Maddow, via Mediaite:

I know I would have preferred it if Paul had in fact commented on the killing during his main speech (which was mostly devoted to foreign policy and defense issues). But Maddow is wrong to say that Paul didn't comment on the Scott shooting while in South Carolina. In fact, he discussed it from South Carolina with Wolf Blitzer on CNN. And there is simply no question that Paul stands head and shoulders above any other national politician when it comes to foregrounding issues of racial injustice stemming from poverty, law enforcement militarization, and the drug war. His response last summer to police actions in Ferguson, State Island, and elsewhere helped create a nccessary and ongoing conversation that simply wasn't happening.

As I write in The Daily Beast in a new column,

Paul revisited his thoughts on police brutality as his nascent presidential campaign landed in South Carolina, where a white cop, Michael Slager, has just been charged with murder for shooting a black man, Walter Scott, who fled on foot during a traffic stop. While saying that "98 or 99 percent" of [cops] are doing a great job," Paul said the killing of Scott was "a terrible tragedy" and called for the compiling of racial statistics when it comes to police shootings. He also added, "I'm concerned that poor people in our society may not be getting the same representation as rich people."…

Apart from underscoring the ways in which police tactics and criminal justice policies disproportionately hurt black and poor communities, he is alone among presidential contenders in highlighting the role of the drug war in turning the United States into something approaching an open-air prison. Taking to the pages of Time again last fall, Paul wrote, "I will continue to fight to end the racial disparities in drug sentencing. I will continue to fight lengthy, mandatory sentences that prevent judges from using discretion. I will continue to fight to restore voting rights for non-violent felons who've served their sentences." Appearing on Bill Maher's HBO show, he proclaimed: "The war on drugs has become the most racially disparate outcome that you have in the entire country. Our prisons are full of black and brown kids. Three-fourths of the people in prison are black or brown, and white kids are using drugs, Bill, as you know…at the same rate as these other kids."

These are positions that resonate with Americans, though not with most politicians of either party. Indeed, Hillary Clinton, reportedly ready to launch her presidential nomination campaign this weekend, is trapped in a prohibitionist mind-set that underwrites the evisceration of the Constitution and leads to all sorts of outcomes that have horrible, disparate impacts on the poor and minorities. Do liberals really think somebody who says we can't legalize drug trafficking because "there is just too much money in it" has even a basic grasp of economics and reality when it comes to prohibition?

If Rachel Maddow and the progs at Think Progress are any indication, we know the line that will be flung Rand Paul's way: This is a guy who has questioned anti-discrimination laws in the Civil Rights Acts of the 1960s, this is a guy who wants to bring back segregated lunch counters.

But when it comes to government policies that screw over blacks, Latinos, and the poor in today's America, getting service at a McDonald's or the equivalent of a Woolworth's luncheonette simply isn't a pressing concern. It's getting shot or killed by cops and, far more commonly, being subjected to an entire system of oppression that predictably funnels black-market drugs into poor minority communities and then punishes them through criminal justice policies that break up families and visits violence upon the guilty and the innocent alike. Beyond that, school choice—which Paul supports, as do most Republicans—is arguably the most pressing issue within poor minority communities.

You don't need to sign off on Rand Paul's entire suite of issues to recognize that he's helped start a conversation about race, law enforcement, and justice that we desperately need to have. And that we're a long ways from finishing.