And that time he brushed off a father whose daughter benefits from medical marijuana... 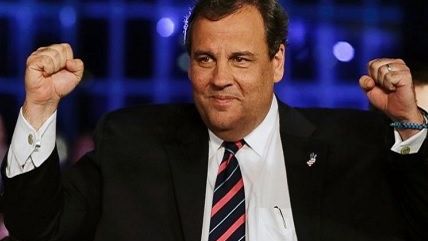 Via the Asbury Park Press via Noah Rothman at Hot Air:

"I've had many taxpayers at town hall meetings who will ask me about, why not legalize marijuana to make the taxes go a little higher?" Christie said. "To me, that's blood money. I'm not going to put the lives of children and citizens at risk to put a little more money into the state coffers, at least not on my watch."

Not on my watch! Such delightful, tough-guy talk from the jefe of my home state, which legalized casino gambling so long ago, was an early pioneer in deregulating beer and alchohol sales, and has any number of horse tracks scattered around like so man Superfund sites! Exactly the type of no-nonsense, blunt speech we once loved about the fella, the Tony Soprano-ish good guy who told teachers to go to hell already, right?

Hot Air's Rothman, a conservative with libertarian leanings, goes deep on all that's wrong pharmacologically with Christie's statements about legalizing weed (and points to various positive elements in the governor's favor, too, such as pushing for drug-sentencing reform). So click through for a thorough fisking of all that.

And read Reason's Jacob Sullum on why Christie is all wrong about marijuana being a "gateway drug."

Suffice it to say that what's on display here is not singular to Christie, either among dum-dum governors of either major party (hello, John Hickenlooper!) or would-be presidents of either party (hello everyone!). What you hear in the "blood money" libel is the last gasp of one of the great policy failures of what we might call "the long 20th century," an era that was filled with so many such rotten efforts. (Let's say the long 20th century in America started with the rise of Progessivism and its cult of controlling all aspects of behavior for the common good. Fifteen goddamn years into the 21st century, we are still living in the long 20th century, alas, and will be until we finally shake off the dust of the past's failures.)

Without being glib or falsely triumphalist about it, the legalization of pot, both recreational and medical, will proceed apace for a large number of reasons. Among them: the rising realization among Americans that it hasn't worked to achieve any of its stated goals, that it is racist in its effects (and was of course racist in its origins), that it incredibly expensive, and on and on.

Attitudes such as Christie's—no blood money on my watch!—will slow down and complicate the legalization process and we should never forget that speed is of the essence. Every year, every month, every day that prohibition continues means that more lives are disrupted and destroyed by stupid and counterproductive laws and policies that still lead to the arrests of hundreds of thousands of people a year. Have you ever been arrested? It's no small thing. Pot prohibition isn't about stopping people from "destroying their lives," it's about wrecking families, perverting the Constitution, diverting police from real crime, creating black-market violence, and making it that much harder for users with problems to seek help. It takes a high that is no more and arguably much less dangerous than boozing it up and makes it a criminal act.

Ultimately, too, pot prohibition violates a core idea that conservative Republicans such as Christie should especially care about: the idea that government should be limited because as a matter of fundamental principle adults can and should be given the widest latitude possible to live their lives how they see fit.

The government has every right to keep intoxicated people from operating heavy machinery or driving up on sidewalks and all that. Dangerous and anti-social behavior should be subject to legal sacntions. But conservatives—more than the typical politician who just wants to be in charge because, well, it's kind of a trip isn't it?—should have long ago grokked that whether you use whiskey or weed or nothing at all to take the edge off at the end of the day is of absolutely no concern to the state.