Adapted from The Libertarian Mind: A Manifesto for Freedom 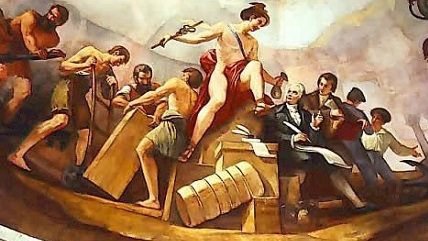 "Bidding wars are breaking out. Foreign buyers are moving in. A new wave of contemporary architecture is taking hold. And a growing class of tech executives is helping to fuel the boom," reported The Wall Street Journal's Mansion section in 2013. "As other American cities have been buffeted by an uneven economy, Washington's property market has been buoyed by two forces specific to the capital city: a surge of federal contractors and a rising tide of government spending. The result: what real-estate agents and developers are calling an unprecedented real-estate surge." The number of homes selling at over a million dollars—over $5 million—is soaring.

Sort of like the Capitol in The Hunger Games.

A rising tide of government spending may be bad for the American economy, but it's great for the Washington area. Washington is wealthy and getting wealthier, despite the very slow recovery in most of the country. Seven of the ten richest counties in America, including the top three, are in the Washington area. That partly reflects the fact that federal employees make substantially more money than private-sector employees—more than double at last count. And it also reflects the boom in lobbying and contracting as government comes to claim and redistribute more of the wealth produced in all those other metropolitan areas.

Money spent in Washington, as with most national capitals, is taken from the people who produced it all over America. Washington produces little real value on its own. National defense and courts are essential to our freedom and prosperity, but that's a small part of what the federal government does these days. Most federal activity involves taking money from some people, giving it to others, and keeping a big chunk as a transaction fee.

Every business and interest group in society has an office in Washington devoted to getting some of the $4 trillion federal budget for itself: senior citizens, farmers, veterans, teachers, social workers, oil companies, labor unions, the military-industrial complex—you name it. The massive spending increases of the Bush-Obama years have created a lot of well-off people in Washington. Consulting and contracting exploded after 9/11. New regulatory burdens, notably from Obamacare and the Dodd-Frank financial regulation bill, are generating jobs in the lobbying and regulatory compliance business.

Walk down K Street, the heart of Washington's lobbying industry, and look at the directories in the office buildings. They're full of lobbyists and associations that are in Washington, for one reason: because, as Willie Sutton said about why he robbed banks, "That's where the money is."

As President Obama began his first term with a massive "stimulus" bill—called "Porkulus" by Tea Party activists—the Washington Post reported that "more than 90 organizations hired lobbyists to specifically influence provisions of the massive stimulus bill." The number of newly lobbying registrations peaked on the day after Obama's inauguration and continued to grow as the bill worked its way through both houses of Congress.

Lobbying didn't start with the Obama years, of course. President Bush increased annual federal spending by a trillion dollars, so it's no wonder that more money was spent on lobbying in 2008 than in any previous year. And then even more was spent in 2009.

When you lay out a picnic, you get ants. When you hand out more wealth through government, you get lobbyists. The federal budget is the biggest picnic in history.

As Craig Holman of the Ralph Nader–founded Public Citizen told Marketplace radio after a report on rising lobbying expenditures during the financial crisis, "the amount spent on lobbying… is related entirely to how much the federal government intervenes in the private economy." Marketplace's Ronni Radbill noted then, "In other words, the more active the government, the more the private sector will spend to have its say… With the White House injecting billions of dollars into the economy [in early 2009], lobbyists say interest groups are paying a lot more attention to Washington than they have in a very long time."

Lobbying never stops. One week in December, the Kaiser Health News reported that "growth opportunities from the federal government have increasingly come not from war but from healing." That is, "business purchases by the Department of Health and Human Services have doubled to $21 billion annually in the past decade." And who showed up to collect some of the largesse? Well, General Dynamics was having trouble making ends meet with defense contracting, so suddenly it managed to become the largest contractor to Medicare and Medicaid. "For traditional defense contractors," wrote Kaiser Health, "health care isn't the new oil. It's the new F-35 fighter."

Of course, the old F-35, despite a decade or more of running behind schedule and over budget, is still doing pretty well. That same week Congress passed the $1.1 trillion "Cromnibus" spending bill, including $479 million for four F-35 fighters from Lockheed that even the Pentagon didn't want. The Wall Street Journal reported that the bill "sparked a lobbying frenzy from individual companies, industries and other special interests"—pretty much the same language you could have read in earlier stories about Porkulus and Obamacare. Every provision in the bill—from the $94 billion in Pentagon contracting to $120 million for the Chicago subway to an Obamacare exemption for Blue Cross and Blue Shield—has a lobbyist or several shepherding it through the secretive process.

Literally as I was writing these paragraphs, I got an email newsletter from "a pioneering public relations firm that integrates sophisticated digital strategies with traditional communications tactics to advance our clients' public affairs or business agendas" with advice on how to get a member of Congress to visit your business and get him "to support the widget association's causes, such as asking the lawmaker to support a particular bill, write a letter to a regulatory agency, contact the president or some other ask."

Not every business goes to Washington seeking a subsidy, of course. Some just seek to be left alone —to be taxed or regulated or mandated less. Either way the lobbyists get paid.

As government expands, more people and businesses find themselves entangled with it.

In the past few years I've had many occasions to write articles about Washington's parasite economy sucking in another company—Microsoft, Google, Apple, and so on. It's always the same story. Entrepreneurs get rich the only way you can in a free market: by producing something other people want. A lot of brilliant people work long hours producing computer software—or any other product—that millions of people choose to use, in the midst of a highly competitive market that offers lots of other options.

Then politicians notice the company's success—and wealth—and begin circling around it. Competitors try to win in Washington what they couldn't win in the marketplace. The lobbyists and congressional aides send messages through the media: "They don't want to play the D.C. game, that's clear, and they've gotten away with it so far. The problem is, in the long run they won't be able to." (A congressional aide re: Microsoft, 1998)

Nice little company ya got there. Shame if anything happened to it.

And companies get the message: If you want to produce something in America, you'd better play the game. Open a Washington office and hire some well-connected lobbyists. Contribute to politicians' campaigns, hire their friends, go hat in hand to a congressional hearing and apologize for your success.

The tragedy is that the most important factor in America's economic future—in raising everyone's standard of living—is not land, or money, or computers; it's human talent. And some part of the human talent at America's most dynamic companies is now being diverted from productive activity to protecting the company from political predation. The parasite economy has sucked another productive enterprise into its destructive maw. And even if the company was just trying to protect itself at first, pretty soon its new lobbyists point out ways that it can use the tax laws and tariffs and regulations and grant programs to victimize its competitors.

The slowdown of the American economy over the past few decades can be blamed in large measure on just this process—the expansion of the parasite economy into the productive economy. The number of corporations with Washington offices has shot up, along with the number of CEOs who visit Washington regularly.

In 1998, after Microsoft went through that process, then-CEO Bill Gates wrote, "It's been a year since the last time I was in D.C. I think I'm going to be making the trip a lot more frequently from now on."

And that's what the parasite economy is costing America. The founders of Apple and Google and other innovative companies waste their brainpower on protecting their companies rather than thinking up new products and new ways to deliver them.

And for those who like big government, I have to say: This is the business you have chosen.

If you want the federal government to tax (and borrow) and transfer $4 trillion a year, if you want it to build housing for the poor and fine-tune economic growth, if you want it to supply Americans with health care and school lunches and retirement security and local bike paths, then you have to accept that such programs come with incentive problems, politicization, corruption, waste, and a wealthy parasite class.

Reason TV recently interviewed David Boaz about his book and ideas. Go here for video and a full transcript.

From THE LIBERTARIAN MIND: A MANIFESTO FOR FREEDOM by David Boaz. Copyright © 1997, 2015 by David Boaz.  Printed by permission of Simon & Schuster, Inc.