SAVE Act Would Hold Websites Criminally Liable for User-Generated Content 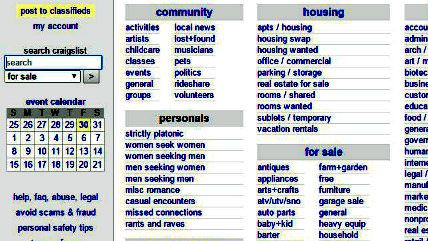 In my earlier roundup of the approximately half-bazillion human-trafficking bills passed by the U.S. House of Representatives this week, I somehow overlooked one of the scariest ones, known as the Stop Advertising Victims of Exploitation (SAVE) Act. Though steeped in good intentions, this is a bill that goes against legal norms we've been establishing for a few decades now when it comes to user-generated content and criminal liability. The legislation would amend federal criminal code to allow both those who post advertisements for sex with trafficked-individuals as well as websites that merely host the advertisements to be punished.

A large coalition of law professors, privacy organizations, and trade groups—including the American Civil Liberties Union, the Electronic Frontier Foundation, the American Society of News Editors, and The Washington Post law blogger Eugene Volokh—object to the SAVE Act. "We share the vital goal of ending human trafficking," states the coalition.

However, the legislative proposals to create new federal criminal liability for online content hosts and publishers are overbroad, counterproductive, and would place unconstitutional burdens on the free speech and privacy rights of millions of Americans.

(…) We underscore the fact that existing federal law criminalizes not only trafficking, but also intentionally aiding or abetting a trafficking venture. But holding hosts of third-party content criminally responsible for content they did not create would be as counterproductive as it would be unjust."

Pursuant to the Communications Decency Act of 1996, websites that host user-generated content—think Craigslist, Reddit, every online publication with a comments section—cannot be held criminally liable for the substance of that content, with a few exceptions. Congress and the courts have generally realized that holding Internet service providers and websites accountable for third-party content would have a ridiculously chilling effect on speech, the press, and economic activity.

As a federal court noted in Zeran v. America Online, Inc. (1998): "The amount of information communicated via interactive computer services is . . . staggering. … It would be impossible for service providers to screen each of their millions of postings for possible problems. Faced with potential liability for each message republished by their services, interactive computer service providers might choose to severely restrict the number and type of messages posted. Congress considered the weight of the speech interests implicated and chose to immunize service providers to avoid any such restrictive effect."

Until now, perhaps. The SAVE Act, currently with the Senate, would criminalize not only advertisements for commercial-sex acts involving someone being "forced, defrauded, or coerced" but also any entity knowingly benefitting "financially or otherwise" from such advertising. Even if sites like Craigslist do not charge users directly for posting advertisements, it could be said that the site still benefits or derives value from its ads. Without classified ads, after all, Craigslist wouldn't have a reason to exist. And of course some classified sites, such as Backpage.com, do charge for user ads.

The "knowingly" part is our silver lining—and an update on a previous version of the SAVE Act from the Senate. With thousands of ads posted daily, it would be silly to suggest that a site like Craigslist knowingly hosts any particular ad. But that won't necessarily stop federal prosecutors from trying. Though the bill's sponsor, Rep. Ann Wagner (R-Miss.), says it would only affect those directly involved in advertising trafficking victims, she has also explicitly stated that her target is mainstream classified websites.