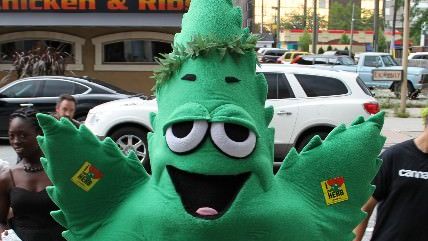 "Maybe someday a future U.S. president will owe his or her backing to the marijuana industry," writes Thomas Maier, author of When Lions Roar: The Churchills and the Kennedys, in a recent Newsday op-ed.

Maier offers the teetotaling patriarch of the Kennedy dynasty as the model for today's would-be billionaire pot investors. Kennedy laid the foundation for his family's fortune with a combination of investing in British liquor imports and securing the exclusive rights to sell said products in New England. Kennedy owed much of his success in securing these deals to his close relationship with President Franklin D. Roosevelt (for whom he would later serve as Ambassador to England) and other Democratic Party bigwigs.

Though Maier stretches the point a bit by comparing Kennedy's spot in the inner circle of a presidency to "today's pot entrepreneurs, who often hire expensive lobbyists and publicity experts, or contribute to pro-marijuana candidates," he draws a number of parallels between the repeal of alcohol prohibition in 1933 and the slow and steady legalization of marijuana in the United States today:

Kennedy began by offering alcohol for medical reasons, just like today's pot entrepreneurs in states such as Colorado where medical marijuana was first sold before it was approved for recreational use. Though he didn't drink, Kennedy made sure in 1929 to get a "Prohibition Service" permit to transport liquor legally for personal use—roughly four cases (12 gallons) of sherry—and became part of a widening circle of distributors who provided alcohol to customers for solely "medicinal purposes."

With legalization comes competition, and Maier also notes that it was vital to Kennedy's economic success to not only be among the first to legally sell booze post-Prohibition, but that his company import only the high-end hooch, separating their product from their competitors in the marketplace:

Like today's marijuana entrepreneurs looking for farms and warehouses to grow their carefully cultivated weed, Kennedy sought a guaranteed supply of top-grade alcohol. Because many U.S. distilleries had closed because of Prohibition, he orchestrated a deal to import British whiskey, gin and other liquor to America.

It may be a while before a presidential election, or even a congressional election, is tipped by the financial influence of the marijuana industry, but there can be no doubt that legal marijuana is big business and growing exponentially.

Former Rep. Patrick Kennedy (D-RI), Joe's grandson and a noted drug addict, has crusaded against pot legalization on the grounds that the "mainstreaming" of the drug would harm the mental health of the nation's youth and lead to the creation of "Big Marijuana." What must he think about the prospect of a political dynasty founded on pot profits?

For more on the creation of Joesph P. Kennedy's post-Prohibition fortune, watch this Reason TV interview with biographer David Nasaw: