Charles Oliver | From the February 2014 issue 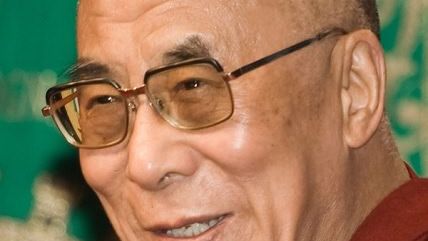 Chinese police beat a Tibetan monk to death after discovering he had an audio cassette with recordings of speeches by the Dalai Lama.

The European Parliament has banned photos and other images of infants on packages of baby formula. Lawmakers say they hope to discourage parents from choosing formula instead of breast milk.

Code enforcement officers in Bartow, Florida, have started telling residents to remove "God Bless America" signs from their homes. Many residents put the signs up to celebrate Independence Day, and officials were willing to let the violations of the city's sign ordinance slide for a while. But enough is enough, they say, and if residents don't take down the signs they could face fines.

Johnny Zukle has been staining two-dollar bills with red ink, to resemble blood, as a marketing gimmick for his Oregon strip club, Casa Diablo. Now the Secret Service is investigating Zukle for defacing currency.

Fulton County, Georgia, District Attorney Paul Howard has used thousands of dollars in asset forfeiture funds to make sure he and his staff have a good time. The Atlanta Journal-Constitution reports that Howard has used forfeiture money to buy Cee Lo Green tickets, throw holiday parties, and fund an office softball team. He also spent $16,000 on security for his home.

Lily Grasso's parents were stunned to get a letter from the Collier County, Florida, Health Department telling them their daughter is "at risk" because of her weight. The letter came after a mandatory health screening at her school. Lily, 11, is five feet, three inches tall and weighs 127 pounds, which according to government standards gives her a body-mass index in the "normal" range.

The Cuyahoga County, Ohio, prosecutor's office fired Assistant County Prosecutor Aaron Brockler after he admitted posing as a woman online to try to get alibi witnesses to change their testimony in a murder case.

Highland Park High School in Illinois allows students to wear costumes to class on Halloween. But when Mashon Sanders showed up as Jesus, officials pulled him out of class and made him change. Some teachers found the costume offensive.

The morning express bus from Dunellen, New Jersey, to the Port Authority Bus Terminal in Manhattan usually takes about 45 minutes. But one day last June the trip took more than two hours. Passengers say the driver appeared to be lost and refused their efforts to give her directions. When several finally asked just to be let off the bus, the driver accused them of threatening her.

The principal of Maryland's Friendly High School warned students not to wear pink to support breast cancer awareness because it would violate the school's uniform policy. When about one-fifth of the students held a "Pink Out" anyway, the school started forcing them to change clothes. When officials ran out of clothes for them to change into, they gave the remaining violators-about 75 in all-in-school suspensions.