"The pandemic's wrongest man" can likely profit from martyrdom.

Twitter has finally had enough of Alex Berenson, the former New York Times reporter who has spent the pandemic being extremely wrong about both the severity of the COVID-19 crisis and, more notably, the efficacy of vaccines. On Saturday, the social media site confirmed that it had permanently banned him for "repeated violations of our COVID-19 misinformation rules."

There are good reasons to be troubled by this decision—even though Berenson is indeed a serial spewer of misinformation.

The pandemic has minted a new class of terribly misguided pundits, and Berenson is among the very worst of them. Early on, he vastly underestimated the eventual U.S. COVID-19 death toll. And while that's a forgivable offense—official predictions ranged wildly, after all—Berenson has compounded his mistake by coming out swinging against vaccines. He has used his Twitter platform to peddle the absurd notion that vaccines might be causing severe illnesses and even deaths. He has suggested that countries with high vaccination rates are having just as bad a time as countries with low vaccination rates. And he has claimed that most people under the age of 70 probably don't need to become vaccinated—even though the death toll for the under-70 crowd is well over 100,000. As The Atlantic's Derek Thompson noted in a conclusive takedown of Berenson—whom he quite reasonably dubs "the pandemic's wrongest man"—these views are all nonsense.

Though COVID-19 has allowed Berenson to fully embrace his role as a purveyor of delusions, it should be noted that he was pushing unscientific nonsense before the pandemic. His 2019 book, Tell Your Children, attempted to scare readers into believing that consuming marijuana makes people crazy and violent. Reason's Jacob Sullum described it as "a work of logical leaps, self-contradiction, misleading glosses, selective quotation, biased evidence gathering, and tendentious interpretation."

Berenson was never worthy of the public's trust, yet his vocal opposition to various COVID-19 mitigation efforts—lockdowns, masking, etc.—has made him a hero to some conservatives. Sen. Ron Johnson (R–Wis.) called him a "courageous voice of reason" and "a valuable counter-perspective." This flattery is undeserved. There are many "voices of reason" who have criticized unending lockdowns, school closures, regulatory hurdles, draconian missives from health officials, and excessive mask mandates without succumbing to anti-vaccine crankery. (For examples, read David Zweig, Nate Silver, Alec MacGillis, Emily Oster, Alex Tabarrok, and, of course, Reason.)

Berenson's final tweet is a good example of said crankery: 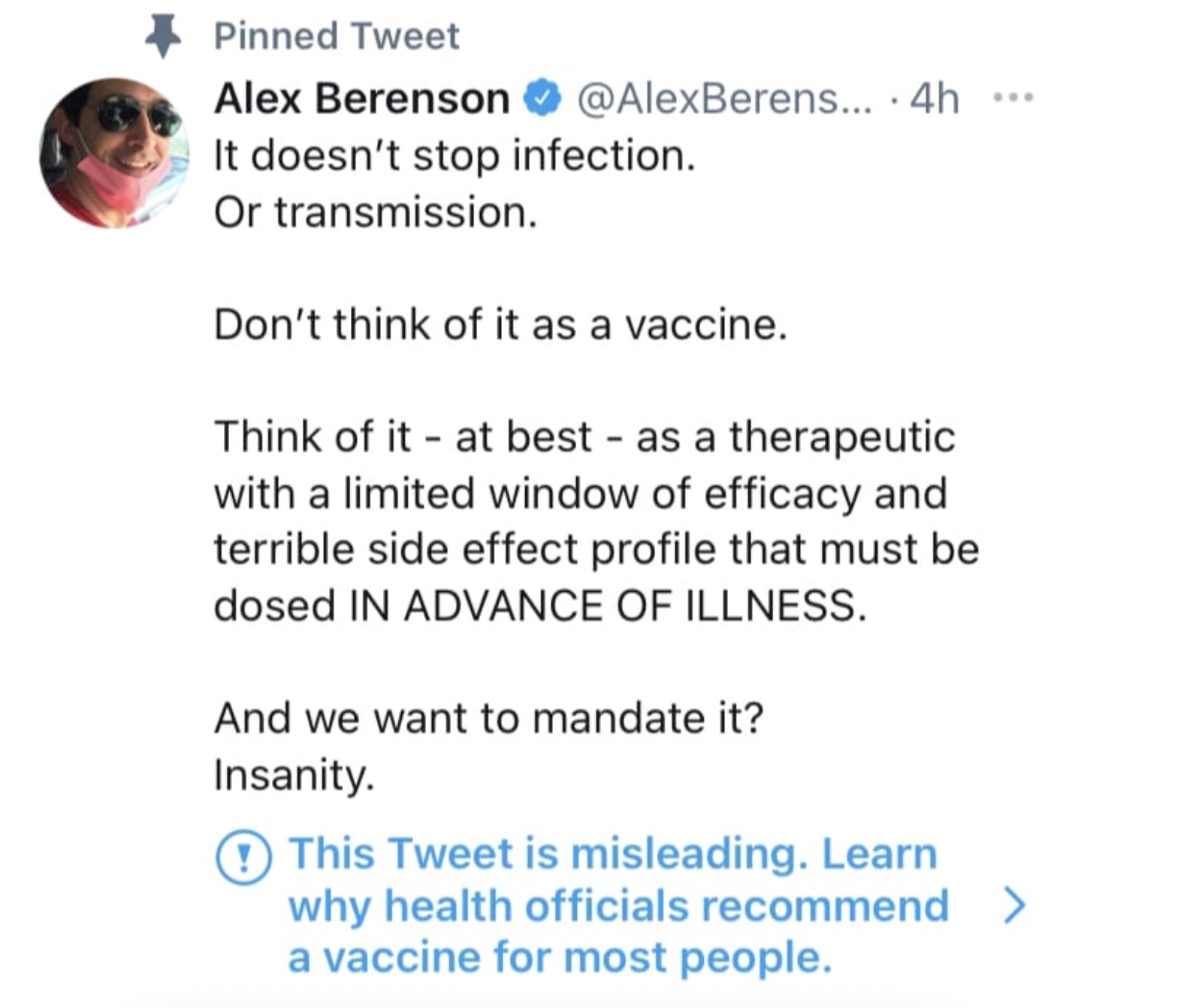 While it's true that the vaccines do not entirely prevent the transmission of the delta variant—breakthrough cases will occur—vaccinated individuals are less likely to contract the disease than the unvaccinated. Moreover, the vaccines dramatically reduce the likelihood of suffering a negative COVID-19 health outcome, such as hospitalization or death. Unvaccinated people account for 97 percent of all hospitalizations and 99 percent of all deaths. This tool that Berenson calls "a therapeutic with a limited window of efficacy" makes dying of COVID-19 an exceedingly rare occurrence. His harping on vaccine side effects is equally delusional: The side effects of the vaccine are almost always less terrible than the primary effects of the disease itself. (Take it from someone who's had both: My bout with the virus, though very mild, was still less pleasant than getting the vaccine.)

It's one thing to oppose mandatory vaccination on the general principle that the government should not and cannot force people to undertake specific medical treatments. It's another to cast doubt on vaccination itself because you think it doesn't work, or is actively harmful. The former is perfectly appropriate; Berenson is doing the latter.

In summary, Berenson is not someone to be taken seriously. All that said, Twitter's decision to banish him is concerning for at least two reasons.

First, while Berenson is a uniquely misguided COVID-19 pundit, he is far from the only person to mislead the public about some aspect of the pandemic. Social media sites have taken great pains to purge so-called misinformation from their platforms, but they have largely taken their cues from government-approved sources of information, which have huge blind spots. It was the government's own health officials, after all, who cast doubt on the idea that COVID-19 could have possibly emerged from a lab and encouraged Big Tech to crush any dissenting views on this subject. But neither Twitter nor Facebook have banned any mainstream media accounts for wrongly deriding the lab leak theory as an unfounded and completely impossible conspiracy theory.

Similarly, White House health experts and the Centers for Disease Control and Prevention have changed their minds on masks, the herd immunity threshold, and many other topics. Their recommendations, projections, and forecasts routinely turn out to be less than reliable, but they suffer no formal reprisals. Social media moderators appear to be especially deferential to the mainstream media; examples of misinformation that speak to the media's bias against contrarian news sources are treated as critically important, while the government's own mistakes get a pass. The difficulty of evenly enforcing misinformation bans is probably a good reason for Big Tech to take a cautious approach; social media sites can avoid charges of hypocrisy by taking a broadly permissive view of what sort of content is allowed on their platforms.

Of course, that's a matter of personal preference: Social media sites like Facebook and Twitter are private companies, and thus have every right to arbitrarily ban any user for any reason. But perhaps they should consider whether banning Berenson actually serves the goal of undermining misinformation. After all, Berenson is currently trying to monetize his suspension, and is calling on his admirers to subscribe to his Substack, which costs $6 per month. (His Twitter feed was free.) Make an idea seem dangerous and forbidden, and some people will pay money to hear it.

There's every reason to believe Berenson is actively trying to profit from martyrdom. When I briefly engaged with him during a television appearance, he claimed that he was a victim of cancel culture because The New York Times had declined to review his latest novel. This is a person who thrives off the idea that he's a brave truth-teller being unfairly denied a megaphone. I say let Berenson spout his nonsense. It's less seductive when it's out in the open—and it earns him less money.