Jury convicts on all charges.

Former Minneapolis police officer Derek Chauvin tells the judge that he waived his right to testify to the jury, next to his defense attorney Eric Nelson. (POOL/via REUTERS/Newscom)

In May 2020, Chauvin attempted to arrest Floyd for allegedly trying to purchase cigarettes at a local store with a counterfeit bill. During a confrontation that was captured on video by bystanders as well as police body cameras, a resistant, seemingly panicked but non-violent Floyd ended up on the pavement next to a police SUV, where Chauvin knelt on his neck, pinning him to the ground for more than seven minutes.

Floyd complained multiple times that he couldn't breathe and then lost consciousness. He stopped breathing, and paramedics were unable to revive him. Subsequent medical examination determined that his death was a homicide caused by cardiac arrest due to his subdual, but Floyd also had fentanyl in his system.

That Floyd was under the influence of fentanyl would be used (particularly by Chauvin's defense) to argue that the amount of force to make this arrest was justified, under a common and debunked claim by law enforcement officers that drug use confers "superhuman strength," thus calling for such heavily physical responses. 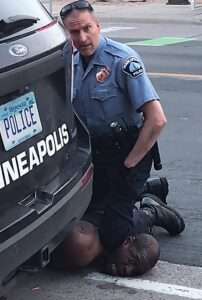 The seemingly casual way that Chauvin pinned Floyd to the ground as he died became an iconic image and a rallying cry for policing reform, particularly in the way officers interact with black people. Protests led to hundreds of proposed policing reforms across the country. Only a few dozen passed, some focusing on rules for use of force and bans on certain types of neck restraints that cut off circulation.

Chauvin was fired the very next day after Floyd's death, and several police chiefs and police unions decried his tactics and said the kneeling technique was an inappropriate use of force.