Prison Guards Who Forced Naked Inmate To Sleep in Sewage and Urine Were Given Qualified Immunity. SCOTUS Disagreed.

The legal doctrine is a free pass for rampant government abuse. 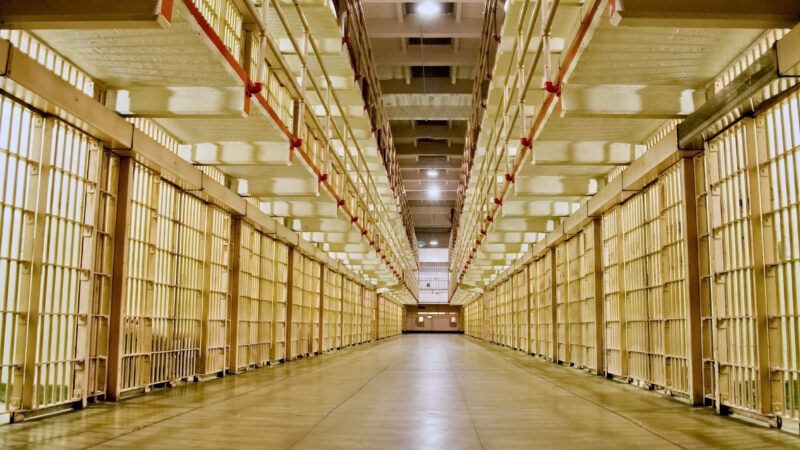 In September of 2013, prison guards escorted a naked Trent Taylor, then an inmate at the John T. Montford Psychiatric Facility Unit in Lubbock, Texas, to his cell. That cell, he contends, was covered in "massive" amounts of human feces—on the ceiling, on the floor, on the walls, and on the windows. He didn't eat for four days because he was anxious he'd risk contamination. Nor did he drink anything after observing that feces were "packed inside the water faucet."

He next moved to a seclusion cell, one that came without a toilet, bed, or water fountain. Its only contents: sewage, built up from a clogged drain on the floor. When Taylor asked to use the restroom, the guards denied his request and told him to urinate in the drain. He would then have to sleep in his own urine, since the floor was already steeped in waste, and since he was without a bed. After 24 hours, he urinated on himself involuntarily, and slept, naked, in sewage.

Taylor sued those guards for violating his Eighth Amendment rights. In December 2019, the U.S. Court of Appeals for the 5th Circuit conceded his rights were violated—but awarded the defendants qualified immunity, the legal doctrine that makes it especially difficult to sue public officials for misconduct.

Earlier this month, the Supreme Court ruled 7–1 that was the wrong decision. It's a welcome change from the high court, which over and over again has declined to consider a spate of cases surrounding qualified immunity and its deleterious effects.

Such shyness is rich when considering that it was the Supreme Court that created qualified immunity. It is the American public, however, that has had to reckon with the consequences. The doctrine shields public servants from federal civil suits unless their misbehavior was "clearly established" in previous case law.

That standard sounds benign. Quite the opposite, as it requires that any alleged wrongdoing be outlined with near-exacting precision in a court precedent within the same federal circuit or via the Supreme Court. A salient example: The 9th Circuit Court of Appeals gave qualified immunity to two cops who stole $225,000 while executing a search warrant. Though the judges agreed the officers "ought to have recognized that the alleged theft was morally wrong," the two cops couldn't have known for certain without a specific case on the books telling them so. Their victims were not afforded the right to sue.

The 5th Circuit decision—now overturned by the Supreme Court—was similarly confounding. Circuit Judge Jerry E. Smith acknowledged that the guards infringed on Taylor's right to be free of cruel and unusual punishment. But because the exact amount of time he spent in those cells—six days—had not yet been spelled out somewhere in a previous ruling, the claim could not stand.

"The Fifth Circuit erred in granting the officers qualified immunity on this basis," wrote the Supreme Court in an unsigned opinion. The newly-minted Associate Justice Amy Coney Barrett did not participate, and the lone dissenter was Associate Justice Clarence Thomas. The panel added that "no reasonable correctional officer could have concluded that, under the extreme circumstances of this case, it was constitutionally permissible to house Taylor in such deplorably unsanitary conditions for such an extended period of time."

He will now have the right to sue those guards in federal court. "The respondents here claim they need breathing room to do their job well," Kelsi Brown Corkran, the lead attorney on the case, tells Reason. "Apparently doing their job well was putting a suicidal individual in a feces-covered cell, where he had no access to water, where he had to sleep in sewage. What possible policy rationale could you come up with that would justify not holding prison officials liable under those circumstances?"

The Supreme Court concurred, invoking Hope v. Pelzer (2002), a precedent that established that qualified immunity can be overcome when the unconstitutionality of the misconduct at hand is "obvious."

The majority of the American public opposes the doctrine. There have been several legislative attempts to fix it, although they've been dead on arrival. Rep. Justin Amash (L–Mich.) spearheaded the first effort in the U.S. House, co-sponsoring a bill with Rep. Ayanna Pressley (D–Mass.) to end qualified immunity. It eventually achieved tripartisan support. And while Republicans have been more resistant to change on this issue, Sen. Mike Braun (R–Ind.) unveiled a bill that would have significantly rolled back the doctrine. Neither piece of legislation ever received a vote.

President Donald Trump expressed during his tenure that he would block any attempts at reforming qualified immunity. Such an aversion appears to be at odds with the GOP's promise to be the party of "limited government," as qualified immunity is nothing more than a free pass for rampant government abuse at the expense of the little guy. It makes more sense, however, when noting the power of the law-enforcement lobby, which Trump courted. President-elect Joe Biden has said he is not ready to scrap the doctrine but would instead like to "rein [it] in."

Though Taylor can now seek recourse, the ruling this month does not alter qualified immunity. Even still, it's the first SCOTUS decision of its ilk in 16 years—and hopefully not the last.