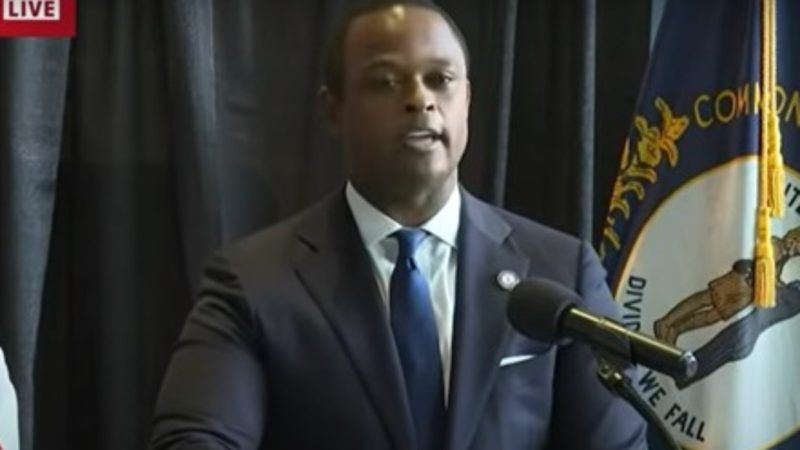 A Kentucky judge yesterday freed the grand jurors who considered criminal charges in the Breonna Taylor case to talk about what happened during those proceedings. One of them promptly accused Kentucky Attorney General Daniel Cameron of misrepresenting their deliberations, saying they did not decline to indict the Louisville police officers who fatally shot Taylor, an unarmed 26-year-old EMT with no criminal record, during a fruitless middle-of-the-night drug raid on March 13. The juror said prosecutors never presented that as an option.

During a post-indictment press conference last month, Cameron said "the grand jury agreed" that Sgt. Jonathan Mattingly and Detective Myles Cosgrove were acting legally in self-defense when they fired a total of 22 rounds at Taylor and her boyfriend, Kenneth Walker, that night. He also said the grand jurors were "presented all of the information and ultimately made the determination" that Detective Brett Hankison, who blindly fired 10 shots from outside Taylor's apartment, "was the one to be indicted." Hankison was charged with three counts of wanton endangerment, since some of his bullets entered an apartment behind Taylor's, which was occupied by three people.

According to an unnamed grand juror who responded to Cameron's statements by seeking public disclosure of the proceedings, the wanton endangerment charges against Hankison were the only charges that prosecutors presented. "Questions were asked about the additional charges, and the grand jury was told there would be none because the prosecutors didn't feel they could make them stick," the juror said in a statement issued by attorney Kevin Glogower. "The grand jury didn't agree that certain actions were justified, nor did it decide the indictment should be the only charges in the Breonna Taylor case. The grand jury was not given the opportunity to deliberate on those charges and deliberated only on what was presented to them."

Cameron said state prosecutors determined that charges against Mattingly and Cosgrove were not legally justified because they were responding to a shot fired by Walker, which struck Mattingly in the leg. In those circumstances, he said, the two officers reasonably believed the use of deadly force was necessary to prevent serious injury or death. But according to the juror, "the grand jury did not have homicide offenses explained to them" and "never heard about those laws." The juror added that "self-defense or justification was never explained either."

Regardless of what prosecutors said, the grand jurors had the power to seek additional information and to consider charges against Mattingly and Cosgrove. But they may not have realized that, especially after prosecutors informed them that "the use of force by Mattingly and Cosgrove was justified to protect themselves," which "bars us from pursuing criminal charges" in connection with Taylor's death, as Cameron put it during his press conference.

Audio recordings of the evidence presented to the grand jurors were released earlier this month. In a highly unusual decision yesterday making the entire grand jury record public and allowing the jurors to discuss what happened behind closed doors, Jefferson County Circuit Court Judge Annie O'Connell said Cameron's comments about the deliberations opened the door to further disclosure. She cited "the interest of the citizens of the Commonwealth of Kentucky to be assured that its publicly elected officials are being honest in their representations; the interest of grand jurors, whose service is compelled, to be certain their work is not mischaracterized by the very prosecutors on whom they relied to advise them; and the interest of all citizens to have confidence in the integrity of the justice system."

A second anonymous grand juror welcomed O'Connell's decision, saying he or she "will be discussing possible next steps with counsel." Cameron said he disagreed with the ruling but will not appeal it.

"Legal issues like causation, justification, and others were always at the forefront during the months of our investigation and had to be considered as my office analyzed the potential charges," Cameron said in a statement he issued yesterday. "As Special Prosecutor, it was my decision to ask for an indictment on charges that could be proven under Kentucky law. Indictments obtained in the absence of sufficient proof under the law do not stand up and are not fundamentally fair to anyone." Notably, Cameron did not say prosecutors explained the relevant law or their reasoning to the grand jurors, as implied by his statements last month that "the grand jury agreed" and "made the determination" that only Hankison should be charged.

Mattingly, meanwhile, seems to have drawn exactly the wrong lesson from the reckless, legally dubious raid that killed Taylor. In an interview with ABC News yesterday, he said "Breonna Taylor would be alive" if he and his colleagues—who approached the apartment around 12:40 a.m., when Taylor and Walker were both in bed—had not knocked and announced themselves before breaking into the apartment.

Although the no-knock search warrant authorized them to dispense with that step, the officers did bang on the door (for 30 to 45 seconds, according to Walker; 45 seconds to a minute, according to the cops), and they say they identified themselves. Cameron accepted that account, although it was contradicted by Walker, who said he thought he was defending himself and Taylor against dangerous criminals, and by nearly every neighbor who spoke to the press. Walker reported a break-in during phone calls that night, including a 911 call after the shooting in which he said, "I don't know what's happening. Somebody kicked in the door and shot my girlfriend." Local prosecutors, who initially charged Walker with attempted murder, dropped that charge in May.

Given the deadly confusion created by the officers' tactics—a well-known hazard of such raids—it is hard to believe things would have turned out better if they had stormed into the apartment even more precipitously. Yet that is what Mattingly claims. He told ABC that Taylor would not have been shot if "we would've either served the no-knock warrant or we would've done the normal thing we do—which is [wait] five to 10 seconds—to not give people time to formulate a plan, not give people time to get their senses so they have an idea of what they're doing."

Yet it is precisely the use of deliberately discombobulating tactics, which intentionally do not "give people time to get their senses," that predictably leads to fatal confrontations like this one. "No-knock warrants have proven to be lethal to citizens and police officers, for an obvious reason," Rep. Tom McClintock (R–Calif.) observed in June. "The invasion of a person's home is one of the most terrifying powers government possesses. Every person in a free society has the right to take arms against an intruder in their homes, and the authority of the police to make such an intrusion has to be announced before it takes place. To do otherwise places every one of us in mortal peril."