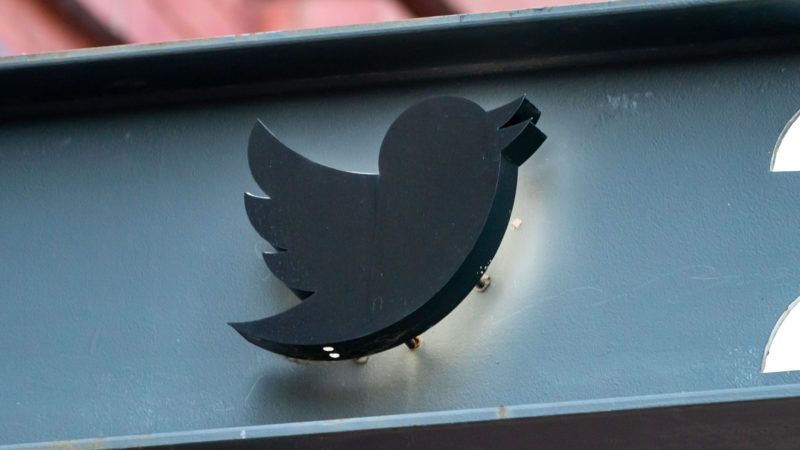 By definition, Twitter can't violate the First Amendment rights of the president, members of Congress, or anyone else. First Amendment violations are things the government does to the people, not the other way around. There is nothing in the Constitution prohibiting Twitter from restricting speech on its platform, and it is certainly not "censorship" (which has denoted government suppression of information since the office of censor was created in Ancient Rome to impose public morality).

This shouldn't need repeating as often as it does these days. But President Donald Trump and those who support him have been working hard to recast censorship as something private companies can do to the most powerful man in the country (see Trump's executive order on Twitter) while arguing that government should be allowed to restrict these companies' freedom of speech, conscience, and association.

The latest round of redefinition comes in response to Facebook saying it would "limit distribution" of a New York Post article about Hunter and Joe Biden due to concerns about its veracity. Twitter also temporarily blocked users from sharing the article, saying that it violated its "hacked materials" policy. (Twitter CEO Jack Dorsey later admitted the rollout of this decision was not great, but did not seem to disagree with it overall.)

It was a bad move on the part of Facebook and Twitter, denying users the opportunity to discuss and perhaps counter the claims in the article among themselves (and likely drawing much more attention to the story than it would have gotten otherwise). Doing so also opened Twitter and Facebook up to allegations of suppressing information critical of Democratic presidential candidate Joe Biden at a time when both companies are putting on a big show of being impartial arbiters of information about the pandemic and the 2020 election (a doomed cause which routinely results in poor calls like this).

But here's the key thing: they don't have to be fair arbiters of political information.

Any of those choices—no matter how politically biased or how weird—would be within their legal prerogative as private entities, which are under no obligation to treat all content equally, to humor information they find unfit, or to set content standards that make any outside sense at all.

Because of the First Amendment, private platforms and publishers aren't required to air any particular viewpoint. Which means social media companies are protected from having to permit any government official to use their service as a microphone or having to give any particular person, article, or idea a place to call home.

Nor does the federal communications law known as Section 230—often invoked by Trump and other Republicans as a law banning bias on social media—actually require the parties it protects to be politically or ideologically neutral. And repealing Section 230 wouldn't suddenly make neutrality a requirement. The First Amendment would still exist, and it would still mean that these companies couldn't be forced to broadcast government messages or to provide refuge for content it deems misleading or even just doesn't like.

Without Section 230, however, companies would be forced to constantly defend their constitutional rights in court—which is expensive and time-consuming. A lot of them will decide it's simply not worth it to allow any controversial speech, and define controversial quite broadly. This ends with everyone—Trump fans, Biden fans, and all the rest of us—facing more limits in what we can see, say, and share online.

If a social media company has an overly narrow mission and too many rules, or claims to be a place for all but continually curates and suppresses content in biased way, then the best way to remedy this is by boycotting and helping to build up alternatives, not granting the government broad new powers to regulate media, ideas, and speech.

The best solution to cramped, anti-speech policies by private platforms is for users to browbeat them into being open and transparent with minimal content regulation. And if need be, create alternatives. This is not a perfect solution but it is far better than those using force.

Trump tweeted about the Post article yesterday evening, writing "so terrible that Facebook and Twitter took down the story of 'Smoking Gun' emails related to Sleepy Joe Biden and his son, Hunter, in the @NYPost. It is only the beginning for them. There is nothing worse than a corrupt politician. REPEAL SECTION 230!!!"

It's obvious why Trump and other politicians cheer the downfall of Section 230, since that would make suppressing speech the government doesn't like easier. It's just not clear why private citizens and journalists keep cheering this on.

• The New Yorker on "why Facebook can't fix itself."

… the company is moving in several contradictory directions at once. In theory, no one is allowed to post hate speech on Facebook. Yet many world leaders—Rodrigo Duterte, of the Philippines; Narendra Modi, of India; Donald Trump; and others—routinely spread hate speech and disinformation, on Facebook and elsewhere. The company could apply the same standards to demagogues as it does to everyone else, banning them from the platform when necessary, but this would be financially risky. (If Facebook were to ban Trump, he would surely try to retaliate with onerous regulations; he might also encourage his supporters to boycott the company.) Instead, again and again, Facebook has erred on the side of allowing politicians to post whatever they want, even when this has led the company to weaken its own rules, to apply them selectively, to creatively reinterpret them, or to ignore them altogether.

• With the second presidential debate now canceled, Biden and Trump will each do separate televised town halls tonight.

• Reason's Nick Gillespie talks to Jia Lynn Yang, author of One Mighty and Irresistible Tide: The Epic Struggle Over American Immigration, 1924–1965, about the past and future of U.S. immigration policy.

• Barron Trump also contracted COVID-19, along with his parents. The 14-year-old "is a strong teenager and exhibited no symptoms," said Melania Trump in a Wednesday statement, also announcing that she has now tested negative again.

• How math became a weapon against tyranny.

• Today is the final day of the Amy Coney Barrett confirmation hearings. Find all of Reason's coverage from this week so far here.