If Trump Was Serious About Police Reform, He Would Have Addressed Qualified Immunity

The legal doctrine makes it considerably harder to hold cops accountable. Trump refused to address it. 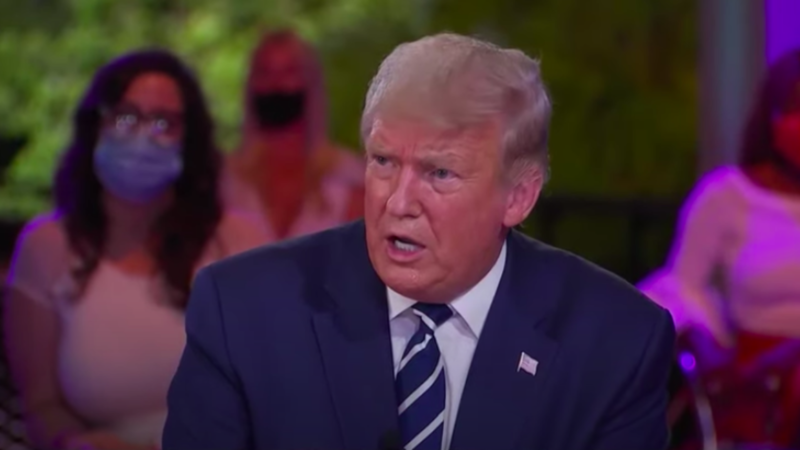 "I have done more for the African-American community than any president with the exception of Abraham Lincoln," said President Donald Trump on Thursday evening as he addressed an audience member during his NBC town hall. The question asked of him: What would he do for people of color who are made anxious by reports of police brutality, especially in the wake of George Floyd's death?

The president invoked a bill put forth by Sen. Tim Scott (R–S.C.) as evidence of his openness to police reform and cited Democrats' refusal to pass it as proof that he is the pro-criminal justice leader the country needs.

But Scott's bill was largely toothless; it promised to create a national database of incidents where cops killed or severely injured someone, and it encouraged departments to ban chokeholds by dangling federal grants as incentive. Notably, it failed to address qualified immunity, the legal doctrine that makes it considerably more difficult to sue police officers when they violate someone's civil rights.

The legal doctrine has protected two cops who allegedly stole $225,000 while executing a search warrant; a sheriff's deputy who shot a 10-year-old boy while aiming at the child's non-threatening dog; prison guards who forced a naked inmate to sleep in cells filled with raw sewage and "massive amounts" of human feces; two cops who assaulted and arrested a man for the crime of standing outside of his own house; two officers who sicced a police dog on a surrendered suspect. That list is not exhaustive.

Earlier this summer, Trump said he would not consider any changes to qualified immunity. Press secretary Kayleigh McEnany called it a "non-starter" for the administration. Attorney General William Barr claimed it would result in police "pulling back." And Scott characterized qualified immunity reform as a "poison pill," an unsurprising declaration when considering the president promised to reject legislation with any such provisions.

Trump's demurral on qualified immunity makes sense from a strategic standpoint; police unions vehemently oppose any changes to the doctrine. And the president has successfully courted the law enforcement lobby's endorsement. (Police unions, like teachers unions, exist to protect employees at the expense of the public.)