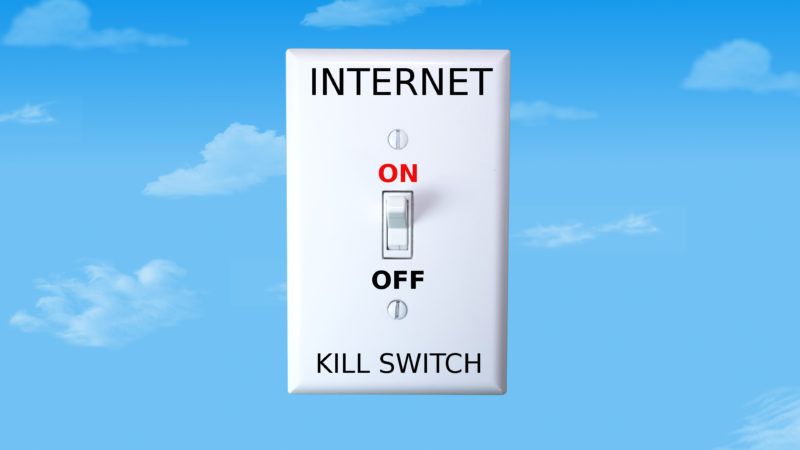 Civil libertarians on both sides of the aisle and in both chambers of Congress have joined forces to call for canceling a little-known executive power.

"No president from either party should have the sole power to shut down or take control of the internet or any other of our communication channels during an emergency," Paul argued in a statement announcing the Unplug the Internet Kill Switch Act.

The bill aims to revoke Section 706 of the Communications Act of 1934. When that law was passed, there was no internet. But the broad language included in Section 706 means that it could be invoked today to give a president "nearly unchallenged authority to restrict access to the internet, conduct email surveillance, control computer systems, and cell phones," Gabbard explained in her statement on the bill.

It's even worse than that. As Michael Socolow wrote in Reason last year, the law is so broad that it effectively gives the president the ability to commandeer any electronic device that emits radiofrequency transmissions. These days, Socolow noted, that includes "everything from your implanted heart device to the blow dryer for your hair. It includes your electric exercise equipment, any smart device (such as a digital washing machine), and your laptop—basically everything in your house that has electricity running through it."

Since the United States is technically engaged in 35 ongoing "national emergencies"—thanks in large part to an executive branch that has stripped those words of their meaning—we should probably be grateful that President Donald Trump hasn't yet reached for this power. He's already invoked Cold War–era laws to impose greater executive control over global commerce in the name of "national security" and has declared illegal immigration to be a national emergency as a political maneuver to redirect funding for a border wall.

Like many presidents before him, Trump seems willing to use whatever powers Congress has foolishly granted to the executive branch to the fullest extent. Congress should claw back what it can.

"With so many Americans relying on the internet to do everything from online banking to telehealth to education, it's essential that federal law reflect today's digital world, not the analog world of World War II," Carl Szabo, general counsel for NetChoice, a nonprofit that advocates for a free and open internet, tells Reason.

How much the federal government could actually do to shut down the internet remains a subject of debate. The very nature of the net—a diffuse network of interconnected computers and servers—makes it virtually impossible for the government to flip a literal on/off switch or push a stereotypical big red button to cut off all Americans.

But the Department of Homeland Security does have protocols for shutting down wireless networks during an emergency, which the agency argues could be used to stop a terrorist from detonating a remote bomb. Given that authoritarian leaders in other countries have shut down wide swaths of internet access during periods of unrest, it's not unfathomable that something similar could happen here.

"When governments around the world turn off internet access, they do significant harm to their national economies and their citizens' civil rights," Massie noted in a statement.

In the midst of an election season in which partisan lines have grown more rigid than ever and when neither major political party seems all that interested in pro-freedom policies, this team-up of libertarian-friendly lawmakers is a little heartwarming. Gabbard, Massie, Paul, and Wyden may not find many allies in Congress on this issue—and, indeed, they don't always agree with one another—but this is one of those issues that might not seem to matter much until suddenly it really does. It's better not to wait for that moment.

"The internet," Wyden declared in a statement, "is far too essential to nearly every part of our democratic system—everything from work, to school and free speech—for any president to have unilateral power to turn it off."