Will his blunt self-aggrandizement reinvigorate concerns about presidents who exceed their powers? 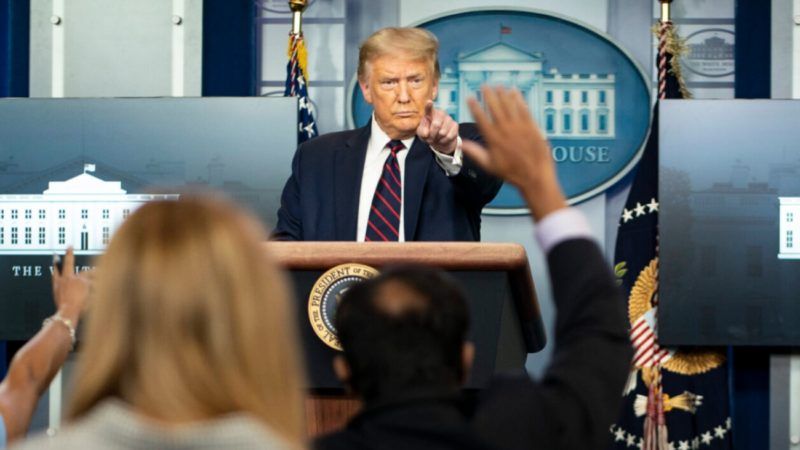 After Donald Trump floated the idea of delaying the presidential election last week, the most striking response came from Federalist Society co-founder Steven Calabresi. "This latest tweet is fascistic," the Northwestern University law professor wrote in The New York Times, "and is itself grounds for the president's immediate impeachment again by the House of Representatives and his removal from office by the Senate."

For Calabresi, who opposed Trump's impeachment for pressuring the Ukrainian government to investigate Joe Biden, the president's suggestion that the election should be rescheduled was a tweet too far. Whether or not you agree, the bipartisan rejection of Trump's suggestion is a hopeful sign that his blunt self-aggrandizement has reinvigorated concerns about presidents who claim powers they were never granted—a problem that extends far beyond this particular president or his party.

"President Trump needs to be told by every Republican in Congress that he cannot postpone the federal election," Calabresi wrote. "Doing so would be illegal, unconstitutional and without precedent in American history."

While Trump did not explicitly assert that he has the unilateral power to postpone the election, he has unambiguously claimed the authority to withhold congressionally appropriated money from states that allow wide use of mail-in ballots. Such extortion "would be a serious threat to both federalism and separation of powers," notes George Mason law professor Ilya Somin.

Trump's assertion of "total" authority over COVID-19 lockdowns was equally dubious. "Some in the Fake News Media are saying that it is the Governors decision to open up the states, not that of the President of the United States & the Federal Government," he tweeted in April.

In fact, Trump averred, "it is the decision of the President." That evening he told reporters "the president of the United States calls the shots."

That was a gross mischaracterization, since states have broad authority to combat communicable diseases under their general "police power," while the federal government is limited to public health measures derived from its power to regulate foreign and interstate commerce. Even if Congress were inclined to cite the Commerce Clause as a justification for lifting state lockdowns, the president would have no authority to act without new legislation.

Illustrating the bipartisan appeal of the imperial presidency, Michigan Gov. Gretchen Whitmer, a Democrat who would be among the first politicians to deny that Trump has the power to override state public health policies, last month urged him to help control COVID-19 transmission by imposing a nationwide mask mandate. She did not even bother to suggest where Trump would get the authority to do that.

In 2017, when Trump suggested that the Federal Communications Commission should yank the licenses of broadcasters who offend him, he got pushback from FCC Chairman Ajit Pai, who promised that "the FCC under my leadership will stand for the First Amendment." Trump's determination to build his "big, beautiful" border wall, notwithstanding the legislative branch's refusal to pay for it, is another example his critics like to cite as evidence of his lawless willfulness.

One presidential power grab Trump's critics tend to overlook, presumably because of their policy preferences, is his capricious ban on bump stocks, which arbitrarily transformed heretofore legal gun accessories into contraband based on a reinterpretation of the law at odds with its plain meaning. Last March, Supreme Court Justice Neil Gorsuch, a Trump appointee, wondered why the courts should "defer to such bureaucratic pirouetting."

Biden promises Americans a return to normal presidential behavior, which unfortunately does not mean a more constrained view of the office's powers. When it comes to waging war, for instance, Biden thinks the president does not need congressional approval for "limited" military operations that serve "important U.S. interests," which amounts to a blank check.

Stylistically, Trump is notably different from his predecessors. But his naked megalomania continues and crystallizes a long-term trend blessed by both major parties.