After Failing To Quell Unrest, the Feds Will Depart From Portland 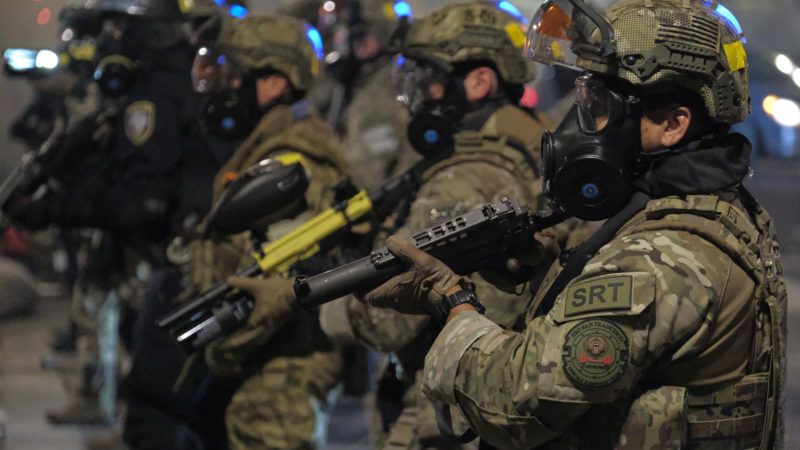 Federal agents in Portland, Oregon, who were sent to quell months-long protests in the city, will begin pulling out tomorrow, Gov. Kate Brown (D) announced Wednesday.

The tactical teams, who arrived in Portland in early July following a June 26 executive order from President Donald Trump, were charged with protecting federal property and supporting local police against "rioters, arsonists, and left-wing extremists," but their presence appears to have only emboldened demonstrators who refocused their efforts around protesting the feds.

Demonstrations spread across the country after the death of George Floyd at the hands of Minneapolis police, forcing new life into the conversation around police reform. Whether you think protests in Portland—and across the country more generally—were peaceful likely hinged on where you read about them. ABC, for instance, reported Sunday that protesters in California set a courthouse on fire, vandalized a police station, and assaulted police officers after a "peaceful demonstration intensified."

But casting protests as either peaceful or violent is an oversimplification. Nancy Rommelmann provided some nuanced coverage on the subject for Reason:

The fence-rattlers take a break to light some garbage on fire and throw it over the fence.

"Why are you doing this?!" a young woman implores whoever will listen. "You're giving them a reason to shoot at us!"

She and the young man she's with confer. "We've got to try," she tells him.

I ask them what they're trying.

"When they start the fires, we come and try to stop them," the young man says. He both puts out the fires himself and explains to the crowd why the tactic is only going to make things worse.

In short, some protesters were violent, some weren't. The dominant media narrative has largely omitted that distinction, leaving many people outside confused over what exactly was happening on the ground. One thing that is not disputed, however, is that the feds' arrival made the situation much worse.

As Reason's Elizabeth Nolan Brown highlights, agents with the Department of Homeland Security (which oversees the officers deployed by Trump's executive order) aren't trained in crowd control tactics. Rather, they're drilled in how to fight on a battlefield. So perhaps that explains why someone like Donavan LaBella, who was merely standing across the street from federal agents, was pelted with munition and later required facial reconstruction surgery. There was also at least one report of a protester being scooped up and detained in an unmarked van and a lawsuit from the American Civil Liberties Union that details federal officers shooting photographer Mathieu Lewis-Rolland 10 times leaving him with "severe lacerations, welts, and bruises all over his upper body."

"Unfortunately, thanks to the federal government flooding our neighborhoods with billions of dollars of military equipment and property over the years," writes Sen. Rand Paul (R–Ky.), "the line between peace officer and soldier of war has become increasingly blurry."

Before leaving, federal agents will work with Oregon State Police to ensure security at the federal courthouse in Portland, which has been the subject of repeated fireworks attacks from protesters.