Plus: "learning pods" are an unfair target, COVID-19 reinfections are unlikely, and more... 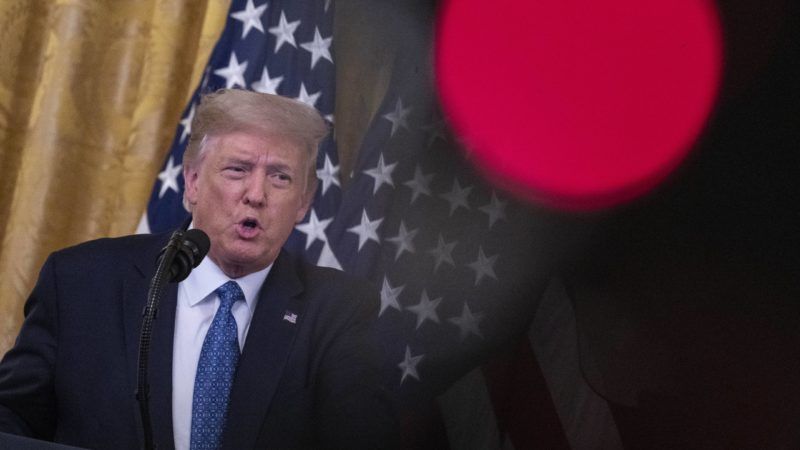 "Operation Legend" will fight "classic crime," says Trump. With Portland protesters and militarized federal cops still clashing, the Trump administration announced on Thursday that it will be sending in a surge of federal agents to other U.S. cities and doling out $61 million for local police forces in these cities. Trump is calling this effort to occupy American downtowns "Operation Legend," and Attorney General Bill Barr justified it yesterday by touting the Justice Department's supposed success in Kansas City, Missouri.

"Just to give you an idea of what's possible," said Barr, "the FBI went in very strong into Kansas City and within two weeks we've had 200 arrests."

Barr's claim is, as the president likes to say, fake news. "Neither the U.S. attorney's office in Kansas City, nor the Department of Justice could immediately provide information to substantiate Barr's claim," noted The Kansas City Star yesterday. A spokesperson for the U.S. Attorney for the Western District of Missouri told the paper that "he was not aware of any additional arrests after his office announced an illegal firearm charge against a Kansas City man earlier this week."

A Justice Department official later offered a correction to Barr's arrest claim, noting that the "200 arrests" Barr mentioned dated back to last year and also included arrests made by state police.

I try not to curse on Twitter, but I will share that when Barr made his 200 arrests claim I sent a Slack message asking the entire KC newsroom: "Does anybody what the fuck he's talking about?!" And there was a reason none of us did. It wasn't true. https://t.co/EwjTWFM1Gn

The official said these arrests had been made since the administration's launch of "Operation Relentless Pursuit" in December 2019 and described "Operation Legend" as "essentially a continuation of that."

The New York Times has more on what this may entail, noting that the surge of federal law enforcement will include agents "reassigned from other tasks at Justice Department agencies like the F.B.I., the Drug Enforcement Administration, the United States Marshals Service, and the Bureau of Alcohol, Tobacco, Firearms and Explosives, as will law enforcement officials from the Department of Homeland Security."

In addition to the extra feds, "the Department of Justice will provide more than $61 million in grants to hire hundreds of new police officers in cities that are the focus" of the operation, Trump said.

"Operation Legend" is supposedly geared at stopping general crime, unlike the force of federal agents sent to Portland, which were sent as part of Trump's executive order on dealing with threats to public monuments. ("The operations we are discussing today are very different — they are classic crime fighting," Trump said yesterday.) But both can be understood as efforts to distract from the president's poor handling of COVID-19 and boost his election-season credentials as someone who's tough on both crime and liberals.

(In a particularly bizarre choice, a new Trump 2020 campaign ad features footage of protests and mayhem currently happening in U.S. city streets and warning that what we're all getting right now under Trump is what you will get "in Joe Biden's America.")

"Classic crime fighting" is not the federal government's job under our Constitution. Keep these armies of federal agents out of U.S. cities. https://t.co/GAnQenaQ28

"On the morning of July 4th, the [Department of Homeland Security] Rapid Deployment Force implemented tactics intended to positively identify and arrest serious offenders for crimes such as assault, while protecting the rights of individuals engaged in protected free speech activity," Federal Protective Services (FPS) regional director Gabriel Russell wrote of the operation.

But under the guise of Operation Diligent Valor, federal agents have been arresting and attacking media, protesters, and even local officials. Last night, they tear-gassed Portland Mayor Ted Wheeler…right before local cops turned around and tear-gas protesters, too.

I just want to emphasize that Mayor Ted Wheeler was out here talking about how he was going to bravely hold the line when federal agents tear gassed the crowd, and then he left after a couple rounds of gas, and now HIS OWN POLICE FORCE is also threatening to gas the crowd?!

"There are currently 114 federal law enforcement officers in Portland to patrol federal buildings, including personnel from the FPS, Immigration and Customs Enforcement, U.S. Marshals Service and U.S. Customs and Border Protection," Reuters reports.

Discord over the reopening of U.S. schools continues. The latest target of progressive anger on this front is the fact that some parents are banding together to teach their children themselves in small groups, or "learning pods."

"At face value, learning pods seem a necessary solution to the current crisis," writes Clara Totenberg Green, a social and emotional learning specialist with Atlanta Public Schools, in The New York Times. "But in practice, they will exacerbate inequities, racial segregation, and the opportunity gap within schools. Children whose parents have the means to participate in learning pods will most likely return to school academically ahead, while many low-income children will struggle at home without computers or reliable internet for online learning."

So, to combat theoretical disparities in learning-pod access, U.S. parents should…what? Send their kids to potentially pandemic-plagued schools? Keep shouldering the burden of home-based education alone? Green doesn't actually say (her piece is all grand complaints and no practical solutions), nor does she offer anything other than conjecture for her claims that only rich kids' parents will pool their resources and form learning pods. Nonetheless—people are outraged! How dare families try to make the best of bad times!

The upper middle-class fuckery described here is outrageous. Why aren't we seeing more news coverage of this bullshit? https://t.co/YpuIvUdi05

BREAKING: There were 1.4 million NEW unemployment aid applications last week in the USA -- an increase of 109,000 from the prior week.

-->This is a big warning sign layoffs are growing again.

Over 1 million unemployment applications have been filed for 18 straight weeks.

• "It is likely that greater than 10 times more [coronavirus] infections occurred than the number of reported COVID-19 cases," according to a new Centers for Disease Control and Prevention study. Reason's Ron Bailey explores what this means.

• Two-thirds of Americans now oppose qualified immunity, which keeps police officers from being sued over official abuse and misconduct. American voters know what's up, writes Billy Binion—but where is Congress?

• State lawmakers in Indiana say they'll look into allegations of abuse and unsanitary conditions at the Indiana Women's Prison.

• Mark and Patricia McCloskey, a St. Louis couple who pointed guns at protesters, have each been charged with one count of unlawful use of a weapon.

Malaysia's new government says you need to apply for a license to film video for personal social media accounts https://t.co/KV0d23SCtR

Correction: This piece initially stated that the $61 million in new federal funding would be for federal police. It is for police departments in cities participating in Operation Legend.