There’s a lot of work to be done to prevent future George Floyds. Here are some baby steps. 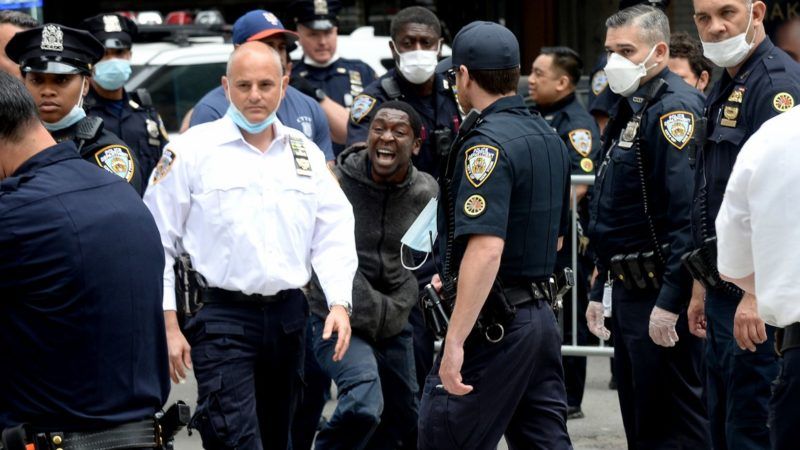 Policing critics, Black Lives Matters activists, and a smattering of elected officials around the country want to pass significant policing reforms following George Floyd's death at the knee of Minneapolis police officer Derek Chauvin. Right now, the biggest proposals are getting the most attention.

Rep. Justin Amash (L-Mich.) is in the middle of crafting a bill that would eliminate qualified immunity, assuming the Supreme Court doesn't do it first. Qualified immunity is the legal doctrine that protects police officers and prosecutors from being sued for violating people's rights.

Other big ideas include limiting the power and influence of police unions, who use collective bargaining not just to negotiate wages and benefits but also to control the disciplinary and appeal processes that make it next to impossible to fire bad cops. Reform advocates also want to build a national registry of police officers fired for misconduct and to repeal state laws that shield police discipline records from public view in order to keep bad cops from moving to new jurisdictions.

While many of these policies seem obvious, they will require an incredible amount of political will to implement. In the meantime, here are four more incremental reforms being considered in communities around the U.S.

1. In San Diego: No more "carotid restraints." Police in San Diego are permitted to use a type of neck hold that cuts off blood to the brain and quickly renders people unconscious. Officers used these holds 70 times in 2019, according to the San Diego Union-Tribune.

Yesterday, San Diego Police Chief David Nisleit ordered a stop to their use, given the potential for harm. Nisleit told the Union-Tribune that he had been considering this change since 2018. The Union-Tribune reports that many cities prohibit chokeholds because they are dangerous and are disproportionately used against minorities. After Floyd's death, a review of Minneapolis police tactics found that when officers used neck restraints to render somebody unconscious, half of the people they used them against were injured.

San Diego City Council members spoke positively about the change, but the San Diego County Sheriff's Department is refusing to follow suit. Deputies will still be permitted to use the carotid restraints.

2. In New York City: Standardize police discipline and ban police chokeholds. In New York City, where police unions are powerful and Mayor Bill de Blasio is so weak that it took five years just to fire the NYPD officer who killed Eric Garner, it will likely take the city council to actually force changes.

After Garner's death from a chokehold in 2014, a New York City council member introduced a measure that would criminalize the use of choke holds by police. De Blasio responded by threatening a veto. Now de Blasio says he'd approve the measure so long as it provides an exception if the officer is in a "life or death situation."

In addition, another council member is proposing a "disciplinary matrix" to create a standard of discipline when officers engage in misconduct. Council Member Donavan Richards told NY1, "There is no written instruction on what a disciplinary action should be if an officer commits an infraction. This will set an example."

New York's lack of public transparency about police discipline contributes to the problem. New York state law shields police discipline records from public view. This can also lead to manipulation within the discipline system itself. When BuzzFeed journalists got their hands on secret New York Police Department disciplinary files, they found both cases where officers received slaps on the wrists for serious misconduct and cases where officers were harshly punished for minor infractions. One internal affairs investigator told BuzzFeed, "If 10 cops did the same exact thing that was bad, the outcome is different every time."

3. In Colorado: Require police to intervene when fellow officers act out. Police unions are often quick to run to the defense of officers when they're accused of misconduct. But when Minneapolis Police Officer Derek Chauvin was caught on video kneeling on Floyd's neck for more than eight minutes, many unions made it clear they found Chauvin's conduct indefensible.

In Colorado, three law enforcement groups—the County Sheriffs of Colorado, the Colorado Fraternal Order of Police, and the Colorado Association of Chiefs of Police—put out a joint statement Tuesday calling for state lawmakers to require that other officers intervene when they see something like what happened to Floyd.

The groups note that it's already a duty for officers to intervene when he or she witnesses a fellow officer engaged in unreasonable force. They're asking for state lawmakers to make it a statutory requirement, leaving officers who don't intervene (like the three cops who stood by while Chauvin slowly suffocated Floyd) possibly facing criminal charges.

Democratic lawmakers in Colorado are working on a sweeping police reform bill intended to hit some of those big picture ideas to fight police misconduct: getting rid of qualified immunity, requiring body cameras for all officers, changes in use of force rules against suspects attempting to escape police, and a rule forbidding cops fired for excessive force from getting work in other cities' police departments in Colorado. Maybe adding a component the unions actually support might help deal with the inevitable resistance.

4. In New Jersey: Launch a statewide use-of-force database. One of the challenges when fighting for reform is the general lack of data about how frequently police use force, under what circumstances, and what the justifications were. Heck, simply tracking who police officers kill in the line of duty is not easy, and efforts by the FBI to track that information nationally have been woefully inadequate.

In New Jersey, data journalists at NJ Advance Media put together their own database of use-of-force incidents within the state covering five years and collating more than 70,000 documents. There was no other statewide collection of use-of-force data and little analysis. After the NJ Advance Media "Force Report" database was released in 2018, state officials started a pilot project to launch an official government database to track the use of force in selected police departments. On Tuesday, New Jersey Attorney General Gurbir Grewal said that starting on July 1, all police departments in the state will be able to participate.

None of these smaller actions should be seen as substitutes for more sweeping reforms. But those are going to be big, long political battles against entrenched police unions with deep pockets. If reformers can convince legislators to implement incremental improvements right now, they should.