Officials in six Pennsylvania counties say they will allow businesses to reopen without permission from the state government. Expect more of that. 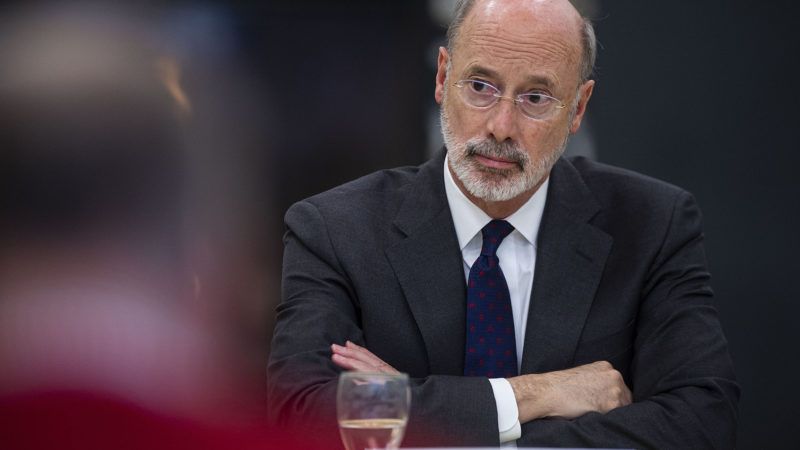 On April 16, President Donald Trump and the White House's COVID-19 task force outlined a three-step process for states to begin unwinding their economic shutdowns. The plan was contingent on ramping up testing and slowing the spread of new cases, and it likely would have taken months to progress from phase one to phase three.

Just three weeks later, a growing number of states have largely discarded the federal plan in favor of their own efforts aimed at restarting their shattered economies.

On April 22, Pennsylvania Gov. Tom Wolf outlined a three-step process for reopening regions of his state, with counties progressing from "red" to "yellow" to "green." Counties can be fully reopened when there are fewer than 50 cases per 100,000 residents over two weeks. The state has cleared 37 counties (out of 67) to move to the "yellow" stage on May 15.

Less than three weeks later, officials in six Pennsylvania counties that have yet to meet that threshold have declared their intention to reopen anyway, and sheriffs in two other counties say they will not issue citations to businesses that open in defiance of the state's shutdown order. Although the county commissioners acted independently from one another, all make more or less the same argument: The state-mandated economic shutdown has been ruinous, the vast majority of coronavirus deaths in Pennsylvania have been in nursing homes, and the 50-in-100,000 threshold will take too long to reach.

The response to the coronavirus pandemic may appear to have been directed by government edict. State governments ordered people to stay home and forced businesses to close, and the White House had daily press briefings to prescribe courses of action. Frustrated residents of various states have directed their outrage towards governors by staging protests at state capitols.

But the weekslong shutdowns that some parts of the country continue to endure were never enforceable from the White House or from any state capitol. They always depended on voluntary compliance from residents. Indeed, most state-level stay-at-home orders came days or even weeks after most Americans were already staying home, as research from FiveThirtyEight pretty conclusively shows.

That compliance is now fraying in many places. And that's why governments cannot fully control the economic reopening. It's not a few dozen protesters who will end the quarantines; it's the millions of other people who have simply started going about their lives again.

Officials need to recognize the limits of their authority. Federal, state, and county authorities can provide guidelines to individuals and businesses about the best ways to protect public health. They can, for example, encourage people to wear face masks in public. But they must also recognize that enforcing those rules with the threat of arrest is counterproductive. Similarly, a prohibition on large-scale public gatherings is much more enforceable than trying to control the behavior of every business in the state.

In trying to enforce overly broad and sometimes arbitrary bans on economic activity, federal and state authorities have lost some of the public trust that's essential to fulfilling the role that government actually can fulfill right now: giving people advise on what's safe and what isn't.

"Total shutdowns cannot be expected to last for weeks or months," I wrote in March. "An equilibrium will be found—either purposefully and orderly by official policy, or haphazardly when people simply can't take it anymore."

The White House has more or less given up on trying to force states to stick to the three-step process outlined last month. Whether that's because the Trump administration realizes it has lost control of the situation or because the president is happy to have someone else to blame if things go poorly, well, you decide.

But in Pennsylvania, Wolf appears prepared to drop the hammer on counties that attempt to buck his orders. In a series of tweets on Monday afternoon, the governor threatened to withhold funds from counties that reopen without state approval. Businesses that open without his say-so could risk their liability insurance and the loss of state-issued licenses, including liquor licenses for restaurants and bars.

I won't sit back and watch residents who live in counties under Stay at Home orders get sick because local leaders cannot see the risks of #COVID19 and push to reopen prematurely.

Today I am announcing consequences for counties that do not abide by the law to remain closed.

There is, of course, a difference between the federal-state relationship and the state-county relationship. Counties and municipalities are, legally, the creations of the state government and do not have the same degree of independence as the states do from the federal government.

Still, it will be instructive to see whether Wolf's heavy-handed approach works or simply spurs more opposition. Pennsylvania has been at the forefront of the civic battles over COVID-19. It was one of the first states to order businesses to close, and it was one of the first states to see a huge spike in pandemic-era unemployment. It makes sense that it would be one of the places where resistance to the shutdowns—organized resistance within various levels of government, not simply angry mobs outside the capitol—would occur.

"This is not a time to give up," Wolf said in a tweet, after outlining how he planned to keep counties in line. "I intend to keep fighting."

One might wonder whether he is fighting the virus or his fellow Pennsylvanians—and whether winning one battle will require losing the other.