Masks Can Be a Symbol of Privacy and Personal Responsibility, Not Tyranny 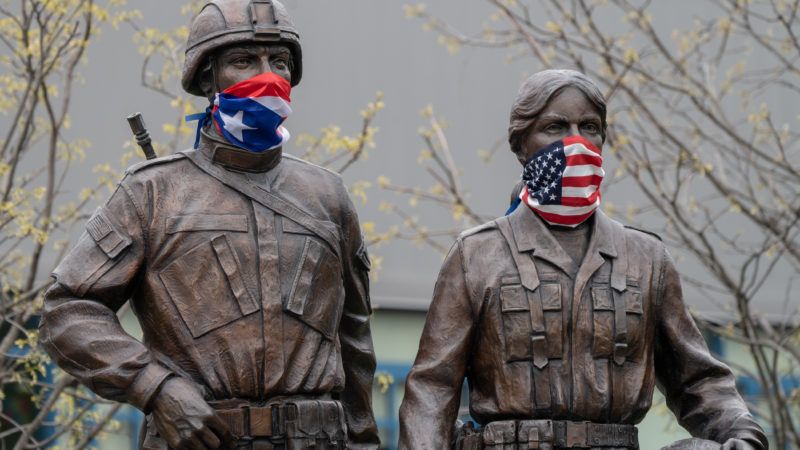 In defense of masks. Some libertarians and conservatives seem to believe in private business conscience and contract rights until opposing them will attract attention or place themselves on their preferred side of culture war politics.

For a few years, this was most common when it came to social media platforms suspending or banning accounts they liked (or the left didn't like) or companies firing employees following an internet outrage campaign. Those opposed would frequently invoke First Amendment rights, even though no government was involved while ignoring the (other times revered) right of private businesses to set terms of engagement for their services.

Now, with the COVID-19 pandemic, we're seeing this constitutional amnesia come to things like people's voluntary decisions to wear personal protective equipment or retail businesses requiring shoppers to wear masks inside. Some people are trying to paint putting rules in place out of concern for the health of others—like businesses requiring that people wear masks on their premises—as somehow tantamount to tyranny.

"The face mask will be rightly regarded as a symbol of obsequious obedience and grotesque compliance with arbitrary and ignorant authority," Jeffrey Tucker, editorial director at the American Institute for Economic Research, tweeted on May 2.

Let's hope not. Masks are rightly a symbol of privacy, and self-reliance (protecting one's self from others, and thoughtfully avoiding hurting others.). It was authorities that moronically avoided masks (some still do.) I'd fear those that try to convince us not to wear masks. https://t.co/2kqJGH3E1x

It shouldn't have to be said, but private businesses can and should be able to set rules for customers. They do it all the time—think "no shirt, no shoes, no service." In most cases—including controversial ones involving wedding cakes for same-sex couples or health insurance coverage of birth control—libertarians and limited-government conservatives respect this, whether they personally agree with the positions of the business owners or find them abhorrent. They also place a high premium on individuals taking whatever personal health and self-care measures (or lack thereof) suit them when they don't harm anyone else.

We may not necessarily believe in crystals, CrossFit, a particular pharmaceutical or diet, praying the rosary, probiotics, microdosing hallucinogens, or whatever other personal habits help people feel safe and healthy, but we defend their right to do these things. And, if we're critical, we tend to express our disapproval as gentle skepticism or mocking, not some horrible affront to liberty.

Which is to say, even if you have it in your head somehow that masks can't help stop the spread of disease: Who cares? Permit people to protect themselves and those around them as they see fit and let it go unless it's somehow infringing on the rights of others. Let private businesses and property owners take whatever precautions and set whatever reopening rules they want. Let consumers shop elsewhere if they stridently object to a store's policies.

My mom in Ohio told me recently that her and my dad's usual Kroger doesn't require masks, so they've been shopping at Menards, which does. I'm sure that's common and probably goes both ways. But if enough customers fall on one side of this divide, stores and services will adjust.

Laws requiring masks in certain types of stores or in public spaces are another matter. After initially telling people not to wear masks, some authorities are now making it mandatory.

As a step toward reasonable reopening standards, that may seem worth it. Unlike many other coronavirus containment tools that governments want the power to use, making people wear masks isn't one that could inconspicuously stick around or one that authorities would want to (unlike, say, cellphone tracking capabilities or a flurry of new street surveillance tools). But anything that invites new contact between cops and scared citizens—or gives authorities new reasons to spy on and cite business owners—is bad news. Even if it might catch some small portion of social-distancing scofflaws, the risks from police enforcement are too great.

Making businesses enforce these rules is dangerous for workers, too. In Holly, Michigan, "authorities are looking for a Dollar Tree customer who balked at the idea of wearing a face mask and instead wiped his face on an employee's sleeve," the Detroit Free Press said yesterday.

And at another Michigan dollar store, this one in Flint, a man shot a store security guard for disrespecting his family by telling them to wear masks. The guard was killed and the shooter and his family have been charged with murder.

In Stillwater, Oklahoma, authorities called off the rule after several people threatened staff who were attempting to enforce the new rule.

And "police arrested a man in Decatur, Ill., on Friday after he shoved a gas station clerk who insisted he wear a mask while paying for fuel on the first day of the state's newly imposed rules that require people to cover their faces inside businesses," reports The Washington Post.

A store owner in Blissfield, Michigan, said several customers not wanting to wear masks have complained about their constitutional rights. This is where reactionary masks-are-tyranny frenzy is getting us, with increased risk of spreading or catching disease whipped up into some sort of patriot cause. It's silly, sad, and so thoroughly wrong.

Enforcing mandatory mask laws might be dangerous, but masks themselves—and their voluntary adoption by consumers and business owners—are important for reducing the spread of both COVID-19 and bad new policies. If we want authorities to actually allow commerce and freedom of movement again, and to avoid top-down impositions of protective-gear rules, we should be encouraging people to voluntarily adopt mask-wearing.

In the long run, ending the taboo (sometimes turned official policy) against people wearing facial coverings may actually be a boon for privacy and protecting against state surveillance, too.

In any event, if protecting civil liberties and constitutional rights is really the aim, it's time to drop hysterical or pointlessly contrarian objections to wearing a mask. That's not anti-authoritarian praxis, it's just being a jerk.

The good news about this Hawley op-ed on abolishing the WTO (https://t.co/NWhmMFsW6I) is that he doesn't understand the WTO or the pre-WTO trading system at all, and his arguments fall apart very quickly based on the actual facts.