Is Preventing COVID-19 Deaths Worth a Severe Recession? The Answer Depends on Controversial Assumptions About the Epidemic's Lethality.

A cost-benefit analysis of COVID-19 lockdowns highlights crucial gaps in the data. 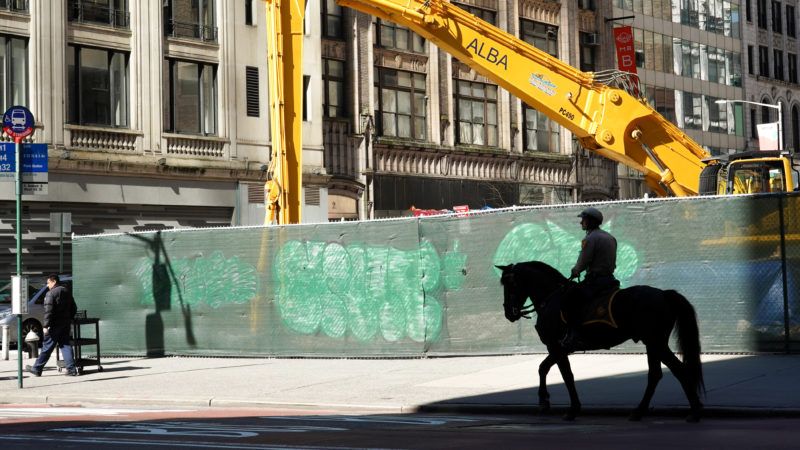 In a paper published on Monday, three economists address the tradeoff between COVID-19 containment and economic activity in the United States. They estimate that "the optimal containment policy increases the severity of the recession but saves roughly half a million lives in the U.S." According to their model, aggressive control measures more than double the decline in aggregate consumption. The lead author, Northwestern University economist Martin Eichenbaum, says the difference would amount to an additional reduction of $1 trillion over the course of a year. That comes out to roughly $2 million for each life saved, which looks like a bargain compared to the $9.3 million per-life value used in the model.

Eichenbaum and his co-authors—Sergio Rebelo, also at Northwestern, and Mathias Trabandt of Free University in Berlin—are grappling with an issue that politicians have mostly ignored in responding to COVID-19: At what point do the costs of their interventions outweigh the expected benefits? But the answer to that question hinges on assumptions that are controversial, impossible to verify based on existing data, or both.

The value that Eichenbaum et al. assign to each life saved is similar to the number calculated by Vanderbilt University economist W. Kip Viscusi based on labor market data. But it is arguably too high, since it does not take into account the age distribution of COVID-19 deaths, which are concentrated among the elderly. "We found that our conclusions are robust to reasonable perturbations of this value," the economists say.

More consequentially, Eichenbaum et al. assume a 1 percent case fatality rate (CFR) for COVID-19, which is the high end of the range that federal public health officials consider reasonable. Currently the crude CFR in the United States is about 1.3 percent. But that rate is bound to be an overestimate, because the denominator includes only confirmed cases.

The current testing capacity in the U.S. is very limited, and COVID-19 symptoms are typically mild to nonexistent, meaning many people who are infected will not seek medical attention or testing. The actual number of infections therefore is probably several times as large as the official number. The size of that gap is crucial in estimating the true CFR.

If the number of U.S. infections is six times as large as the official tally—as it was in the early stages of China's epidemic, according to one estimate—the true CFR at this point would be about 0.2 percent, one-fifth the rate used in this study. Eichenbaum acknowledges that "the savings depend on the mortality rate," although he cautions that you can't simply multiply the cost per life saved, since people would behave differently in response to a substantially lower CFR. The true CFR for the United States cannot be calculated without testing everyone, or at least a nationally representative sample.

Another important variable is the percentage of the population that would ultimately be infected without drastic action. Eichenbaum and his co-authors chose their parameters based on a figure of 65 percent, drawn from the scenario described in a March 11 speech by German Chancellor Angela Merkel. "The consensus among experts," Merkel said, "is that 60 to 70 percent of the population will be infected as long as this remains the situation." The worst-case scenario sketched by the U.S. Centers for Disease Control and Prevention (CDC) likewise imagines that 65 percent of Americans are infected, projecting 214 million infections and 1.7 million deaths.

Because Eichenbaum et al. assume a CFR of 1 percent, as opposed to the 0.8 percent assumed by the CDC, they project even more deaths: 2.2 million. Even under their "optimal containment policy," the number of deaths is the same as in the CDC's worst-case scenario.

Merkel's estimate that 60 percent to 70 percent of Germans would ultimately be infected is consistent with a two-year projection by the Robert Koch Institute, "based on model calculations." Those calculations may be misleading if they do not adequately account for adaptive behavior (avoiding crowds, limiting social interaction, extra attention to hygiene, etc.) that would occur even without broad coercive measures such as lockdowns.

In any case, the fear of widespread infection seems to be at odds with the hope of herd immunity. "Absent treatments or vaccines, the only way to acquire immunity is to become infected and recover," Eichenbaum and his co-authors note. "Sadly, this process involves the death of many people who never recover from an infection. The need to develop 'herd immunity' is a property of epidemics [that] serves as an important backdrop for our discussion of optimal policy." They say "the optimal way to reach this critical level of immunity is gradually increas[ing] containment measures as infections rise and slowly relaxing them as new infections wane."

In addition to assuming a relatively high mortality rate coupled with widespread infection, Eichenbaum et al.'s calculation does not include the entire economic cost of aggressive intervention. "Our model abstracts from various forces that might affect the long-run performance of the economy," they write. "These forces include bankruptcy costs, hysteresis effects from unemployment, and the destruction of supply-side chains. It is important to embody these forces in macroeconomic models of epidemics and study their positive and normative implications."

Last week The New York Times described the cost-effectiveness of COVID-19 control measures as "a taboo question." Yesterday the Times gingerly raised the issue again. "Can We Put a Price Tag on a Life?" the headline asked. "The Shutdown Forces a New Look." It sure does.

"Economists should be doing this cost-benefit analysis," Stanford economic historian Walter Scheidel told the Times. "Why is nobody putting some numbers on the economic costs of a monthlong or a yearlong shutdown against the lives saved? The whole discipline is well equipped for it. But there is some reluctance for people to stick their neck out."

Eichenbaum, Rebelo, and Trabandt deserve credit for sticking their necks out. But their effort underlines the shaky empirical basis for supporting (or opposing) shutdowns. When "the best estimates" for COVID-19's CFR range from 0.1 percent to 1 percent, as Assistant Secretary for Health Brett Giroir told reporters earlier this month—or possibly from 0.05 percent to 1 percent, as Stanford epidemiologist John Ioannidis suggests—it is hard to say with any confidence whether these measures can be rationally justified, or for how long.