Bloomberg Drops Out, Demonstrating the Limits of Money and the Perils of Arrogance

The former New York City mayor has never been good at concealing his conviction that he is smarter and better than the rest of us. 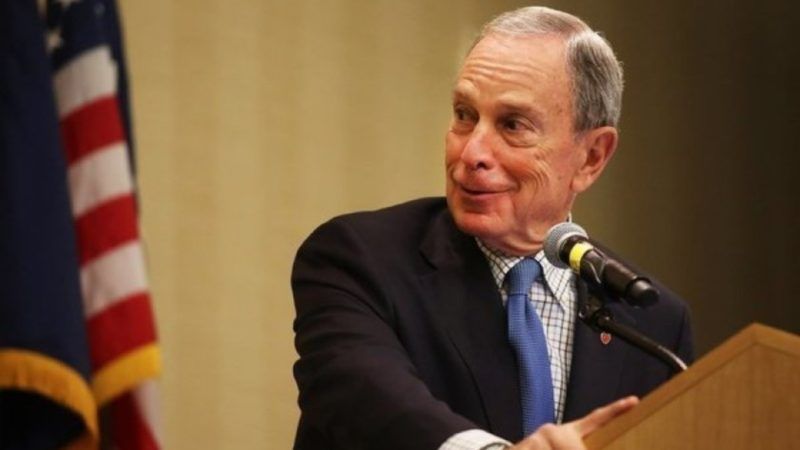 "Why don't they coalesce around me?" former New York City Mayor Michael Bloomberg asked yesterday before the wildly disappointing Super Tuesday performance that led him to drop out of the race for the Democratic presidential nomination today. Bloomberg won the caucuses in American Samoa but fell far short of victory everywhere else after spending half a billion dollars of his own money on a quixotic quest to replace former Vice President Joe Biden as the moderate alternative to an avowed democratic socialist, Sen. Bernie Sanders (I–Vt.).

Today Bloomberg endorsed Biden in a gracious statement acknowledging that "a viable path to the nomination no longer exists," calling Biden "the candidate with the best shot" at defeating Donald Trump, and praising "his decency, his honesty, and his commitment to the issues that are so important to our country." But Bloomberg never would have entered the race last November if he thought Biden was up to the task, and the chutzpah embodied in his strategy of skipping the early contests and debates, flooding the airwaves and internet with ads, and swooping in to rescue a party he joined less than two years ago goes a long way toward explaining why primary voters found him so unappealing.

Anyone who wants to be president almost certainly has an inflated sense of his own competence and wisdom. That is especially true for someone like Bloomberg, a remarkably successful entrepreneur who became the world's ninth-richest person by providing value to consumers and erroneously thought his skills as a businessman made him especially qualified to boss people around. But good politicians are skilled at concealing their arrogance, recognizing that voters may find it off-putting. Bloomberg has never been good at that.

This is a man who devoted much of his time as mayor to berating poor people for their unhealthy habits, a condescending paternalism epitomized by his extralegal attempt to ban the sale of large sugary beverages. He defended that crusade in embarrassingly grandiose terms: "We have a responsibility as human beings to do something, to save each other, to save the lives of ourselves, our families, our friends, and all of the rest of the people that live on God's planet." Bloomberg, who called protecting people from their own bad habits "government's highest duty," sincerely thought he was saving the world, one slightly smaller soda at a time.

This is a man so convinced that he was uniquely qualified to run New York's government that he pushed through a legal change allowing him to serve a third term, then backed legislation reimposing the two-term limit. "Bloomberg thinks that being able to serve three terms in office is a good idea—just not for anyone else," The New York Times noted at the time.

This is a man who in 2001 cheerily admitted that he had smoked marijuana and enjoyed it, then presided over a dramatic surge in arrests of cannabis consumers. Last year Bloomberg called legalizing cannabis "perhaps the stupidest thing we've ever done." Once he decided to run for president, he wanted Democratic voters, three-quarters of whom support legalization, to forget about his record on this issue. "Putting people in jail for marijuana," he declared, is "really dumb."

This is a man who either did not know or did not care that the "stop, question, and frisk" program he championed as a way of deterring young black men from carrying guns, which at its peak subjected overwhelmingly innocent people to 685,000 humiliating police encounters in a single year, was blatantly unconstitutional. That program, like Bloomberg's panoply of paternalistic "public health" prescriptions, reflected his unshakable confidence that he knows what's best, even when the supposed beneficiaries of his policies vehemently disagree. Bloomberg doggedly defended stop and frisk for years after leaving office, then abruptly reversed his position the week before he officially launched his 2020 presidential campaign, recognizing that the policy was unpopular with today's Democratic primary voters.

Bloomberg thus began his presidential campaign on a false note, an awkward position for a politician vying to replace a president who can barely open his mouth without prevaricating. He compounded the dishonest tone of his campaign with a Super Bowl ad that was built around a lie about "children" killed by "gun violence." The ad, which presented Bloomberg as a brave champion of public safety who is not afraid to take on "the gun lobby," was also misleading in a subtler way. As David Harsanyi noted at National Review, the resources Bloomberg has devoted to promoting new firearm restrictions dwarf what the National Rifle Association spends to resist those policies.

Truth aside, the Super Bowl spot was compelling. But the same could not be said of many other ads that Bloomberg bombarded us with, which Democratic strategist Elizabeth Spiers described as "mediocre messaging at massive scale." Whenever Bloomberg himself spoke, he came across as wooden and decidedly uncharismatic. While viewers might very well have agreed with his critique of Trump, that did not mean they saw Bloomberg the way he saw himself: as the guy with the best chance of defeating the president. Doubts on that score surely were not assuaged by Bloomberg's surprisingly inept performance during the first debate in which he participated.

Only yesterday, The New York Times was marveling at Bloomberg's campaign organization, which hired more than 2,400 people, "opened more than 200 offices from Maine to California," "blanketed the airwaves with half a billion dollars in ads and paid social media influencers to spread his message," "deployed new artificial intelligence technology" to "adjust his message in real time as issues like the coronavirus outbreak erupted," and "tapped into the political networks of mayors in major cities like Houston and Memphis, who helped Mr. Bloomberg fill his rallies with prominent local politicians and pastors." This sophisticated operation was all the more impressive because it had been set up so quickly: "What other campaigns took more than a year to build, with visits to fish frys in Iowa and cable news studios, the Bloomberg campaign did over the three months from Thanksgiving to Presidents' Day."

But the Times also conceded that "there are those who find [Bloomberg] unappealing," which turned out to be an obstacle that no amount of money could overcome. The most salutary aspect of Bloomberg's campaign is that it refuted once again the main premise of attempts to protect democracy by restricting speech. Even for a candidate who can far outstrip his competitors' spending by shelling out less than 1 percent of his personal fortune, money can't buy you love.