The incident is just the latest in a string of excessive force incidents involving school resource officers around the country. 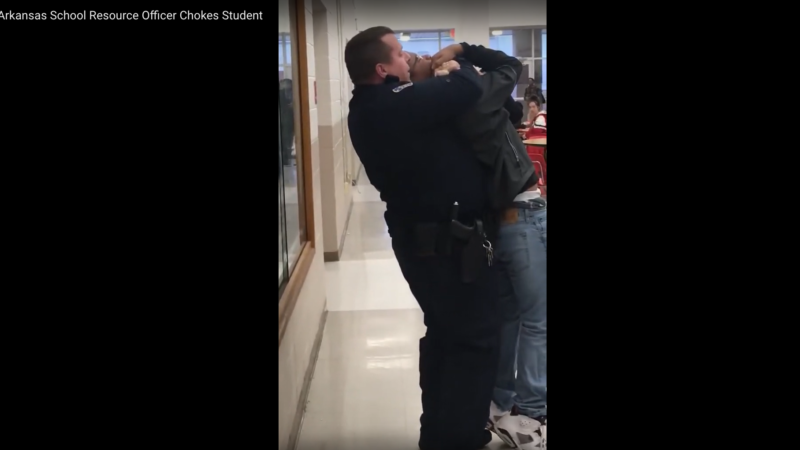 A school resource officer at a high school in Camden, Arkansas, has been relieved of duty after video emerged Monday showing him putting a student in a chokehold and lifting the student off of the ground.

Video first uploaded to Facebook showed police officer Jake Perry with his arm around a Camden Fairview High School student's neck, choking him out. At one point, Perry lifts the student off the ground. The Arkansas Democrat-Gazette reports that Perry had been on the Camden police force for two or three years but had only been assigned as a school resource officer this month.

Perry has been relieved of duty pending an internal investigation. "As the Police Chief, I will not tolerate misconduct from my officers and this matter will be dealt with accordingly and I will be transparent in doing so," Camden Police Chief Boyd Woody said in a statement released on Facebook.

The incident is just the latest in a string of school arrests that have made national news. In December, a North Carolina school resource officer was fired after a video was shared with a local news station showing the officer brutally body-slamming a middle schooler.

Irena Como, acting legal director for the ACLU of North Carolina, said after the assault, "This type of heartbreaking incident is all too common as educators increasingly rely on law enforcement to handle routine disciplinary issues, especially with children of color and children with disabilities."

Earlier this month, a family filed a lawsuit against a Pittsburgh public school alleging their 7-year-old boy was handcuffed and physically assaulted. Last year, video showed a school resource officer in Texas pinning and handcuffing an autistic 10-year-old.

The Justice Department's 2017 report on civil liberties abuses by the Chicago Police Department included findings that officers beat and tased teenagers in school for non-criminal conduct and minor violations.

The good news is the rate of juvenile arrests has dropped significantly since its peak, from around 8,500 arrests per 100,000 individuals between the ages of 10 and 17 in 1996, to 2,400 per 100,000 in 2016. But as I wrote in a recent column for Reason on child arrests, "The criminal justice system has become America's default solution for all of its social problems, and that mentality has oozed into the classroom."