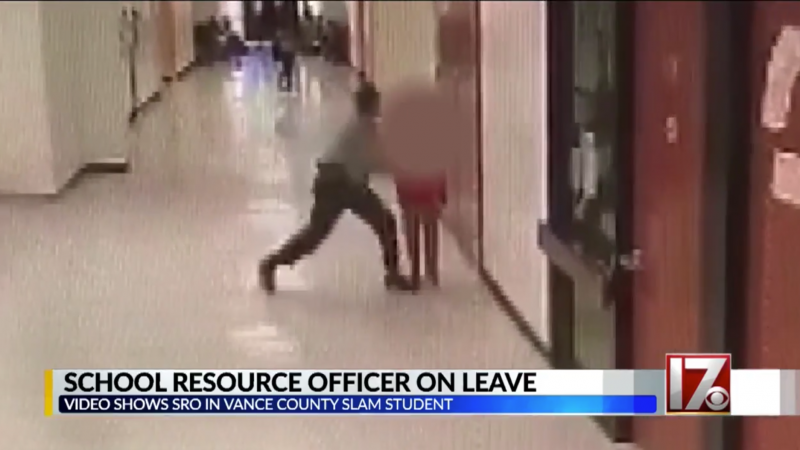 A North Carolina school resource officer has been fired after a video was shared with a local news station showing the officer brutally body-slamming a middle schooler.

Local news outlet CBS 17 first aired the shocking video several days ago, which shows a Vance County Sheriff's deputy picking up a middle school boy and slamming him to the ground twice, before dragging him off-camera. Now the station reports that the deputy has been stripped of his badge.

"We went over and when we first saw the video, we were stunned, we were shocked. We all are parents and grandparents that have children at that same age, so it brought some great concern to us," Vance County Sheriff Curtis Brame told CBS 17 last Friday.

The Justice Department's 2017 report on civil liberties abuses by the Chicago Police Department included findings that officers beat and tased teenagers in school for non-criminal conduct and minor violations.

As I wrote in a recent column for Reason on child arrests, "The criminal justice system has become America's default solution for all of its social problems, and that mentality has oozed into the classroom."

However, according to 2016 data from the Justice Department, 34 states have no minimum age for delinquency.

In a statement to CBS 17, Irena Como, acting legal director for the ACLU of North Carolina, said, "This type of heartbreaking incident is all too common as educators increasingly rely on law enforcement to handle routine disciplinary issues, especially with children of color and children with disabilities."

"School Resource Officers are charged with protecting students, but they use physical force and escalate situations to the detriment of students," Como continued. "School Resource Officers should never handle disciplinary issues, which are more appropriately addressed by school counselors or mental health professionals, and the routine presence of police in schools should end."

The now-fired deputy, whose name has not been released, is also facing potential criminal charges.