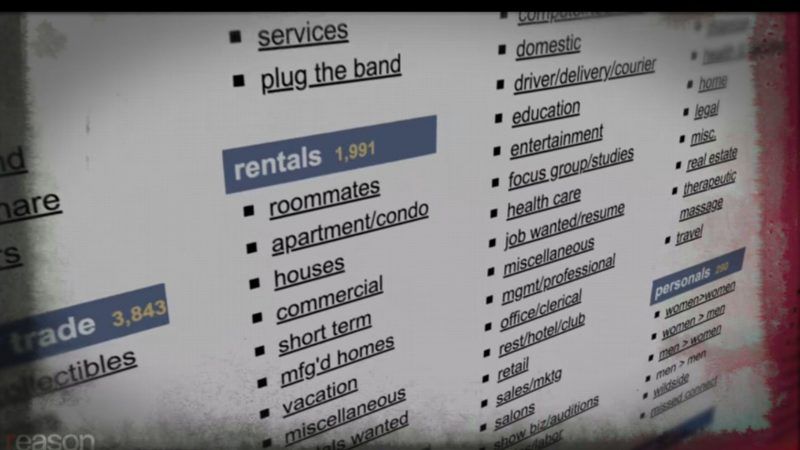 Aggressive civil asset forfeiture is colliding with First Amendment rights in the Justice Department's ongoing efforts against the former executives of Backpage.

Judges from the U.S. Court of Appeals for the 9th Circuit considered claims this week that federal prosecutors have improperly seized the executives' money and property and used dirty tricks to prevent the courts from making things right.

Those challenging the seizures include Michael Lacey and James Larkin, the onetime owners of both Backpage and a host of alt-weekly newspapers, along with their former employees John Brunst and Scott Spear. All four were arrested in April 2018 as part of the federal criminal prosecution of Backpage executives for alleged money laundering, conspiracy, and violations of the Travel Act.

Since that time, the feds have seized "26 real properties (some purchased before Backpage.com ever existed), 89 bank accounts, and 268 domain names" from the defendants, their family members, and associated entities. Prosecutors also seized money held in trusts by the defendants' lawyers, jeopardizing defendants' ability to afford defense counsel as they wait out a trial set to start in May 2020.

In a recent brief, they accuse the feds of trying to "deprive defendants in a criminal prosecution of assets to fund their defense, and subsequent efforts to block defendants from constitutionally challenging the Government's overreaching."

Former Assistant U.S. Attorney Christine Biederman, who recently wrote about the case for Wired ("Inside Backpage.com's Vicious Battle with the Feds") has told writer Steven Lemons that prosecutors have been trying "to delay, and ultimately, prosecutors hope, avoid pretrial review of the seizures."

Thus far, the government has seized "millions of dollars of assets belonging to [Brunst et al] and their family members," according to the February 2019 motion. "All told, the Government obtained at least 24 civil seizure warrants." And nearly all of the assets involved "were derived from [their] publishing activities, including assets earned from decades of operation of the newspapers, long before the creation of Backpage.com."

Under the twisted rules of civil asset forfeiture, the government can take money and property from those accused of wrongdoing before actually proving any wrongdoing, so long as there is "probable cause" to believe the assets were used in or derived from criminal activity. But for assets related to potentially First Amendment–protected activities, a higher standard is required. If the government wants to grab those assets pre-trial, it must first show that the speech in question is not constitutionally protected.

At the July 9 hearing, Judge Michelle Friedland asked one of Backpage's attorneys, Robert Corn-Revere, whether making a ruling on seized assets would require a determination of whether seized proceeds stemmed from illegal activity.

"That's the ultimate question of trial," responded Corn-Revere. But in seizing first, figuring that out later, federal prosecutors are "assuming their conclusion, then claiming that they can do the seizure."

Corn-Revere later added that the case was about a "fundamental First Amendment question of whether or not the government can do an ex parte seizure of a publisher's assets, simply by alleging that the publishing is illegal."

Back in California last fall, prosecutors argued that the court should hold off on the asset forfeiture question pending the resolution of things in Arizona. The court agreed, in October 2018.

In their appeal of that decision, Brunst, Lacey, Larkin, and Spears accused the government of essentially "maneuver[ing] to evade any form of judicial review" of "the legal merits of its pretrial seizure of millions of dollars of publishing assets and proceeds." They asked the 9th Circuit Court of Appeals to reverse the lower court's stay order and "immediately vacate the seizures based on established constitutional rules under the First, Fourth, Fifth, and Sixth Amendments."

The government replied that it was within its rights to "seek civil and criminal forfeiture of the same property," claiming that it had merely been trying to make Backpage argue some of its anti-forfeiture claims in one court and some in the other.

Meanwhile, the government has continued to assert that all the assets it seized were derived from the operation of Backpage, that all ads on Backpage were illegal, and that this is self-evidently true. But it conceded in May that a court hearing on some of the substantive claims brought by the defendants is merited, and it asked the appeals court to send this back to the district court for a limited re-review.

Government lawyers have also argued that there were no free speech issues raised in this case in the first place, since Backpage had already been shut down and, besides, sold by Lacey and Larkin in 2015. "Whose First Amendment rights and what 'publishing assets and proceeds' are implicated here?" they wrote. "Appellants sold their shares in Backpage to [Carl] Ferrer in 2015, and Backpage is defunct."

But Backpage is defunct because of government actions. It's a funny sort of justice that lets the government take your stuff and then say you have no recourse because you don't have that stuff anymore.

In any event, the feds' argument represents a fundamental misinterpretation of the First Amendment issues at play. (The point, after all, is not whether the personal expression of these four defendants is being directly threatened.) It is also a rather disingenuous tack: Elsewhere in the case, in order to hold them responsible for more recent activity, the prosecutors argue that defendants never really did let the company go.

In February, the Reason Foundation (the nonprofit that publishes this magazine), the Cato Institute, and the DK Liberty Project filed an amicus brief in support of the appeal, for the purpose of "amplify[ing] the danger that the government's use of civil forfeiture to seize the assets and proceeds of expressive material poses to free expression."