All the Top Democrats Running for President Favor Legalizing Marijuana 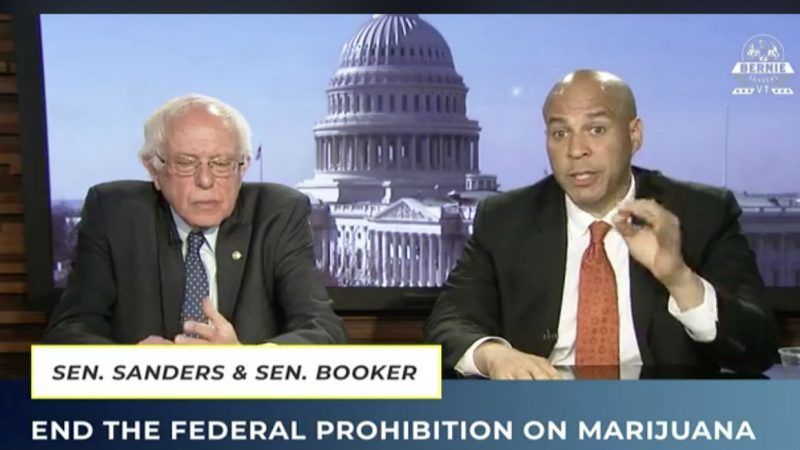 "Marijuana legalization," declared a Vox headline last month, "is winning the 2020 Democratic primaries." A quick scan of the field indeed shows how far we've come since even 2011, when "Choom gang" alum Barack Obama was still cracking down on state-legal medical marijuana outfits and laughing off suggestions that prohibiting a popular, non-lethal plant was perhaps not the wisest public policy.

In fact, the top 11 highest-polling declared Democratic presidential candidates (plus a bunch in the lower tiers, notably Rep. Tulsi Gabbard [D–Hawaii]) have all backed some form of ending the federal prohibition of marijuana, fewer than four years after Sen. Bernie Sanders (I-Vt.) became the first major-party candidate in history to do so. Several in fact have become legislative leaders on this issue, especially Sens. Cory Booker (D-N.J.), Elizabeth Warren (D-Mass.), and Kirsten Gillibrand (D-N.Y.), plus former congressman Beto O'Rourke.

As popular opinion and state law speeds toward legalizing recreational weed, and a

tough-on-crime Republican president frees prisoners and advances criminal justice reform, former drug warriors are scrambling to catch up with the times. The last holdout here may be still-undeclared candidate Joe Biden, who invented the office of the drug czar, spearheaded some of the very worst criminal justice laws of the past four decades, and said while vice president that legalization is a "mistake" because marijuana is a "gateway drug."

Still, as senior editor and longtime drug policy journalist Jacob Sullum told Nick Gillespie on Wednesday's Reason Podcast, virtually all major-party presidential candidates this year are pretty damned good on pot legalization. This not only is unprecedented, it was also unthinkable very recently.

So with a big assist from our friends at Marijuana Moment, and taking advantage of Reason's new-and-improved search engine, here's a survey of post positions among the highest-polling Democrats to declare: 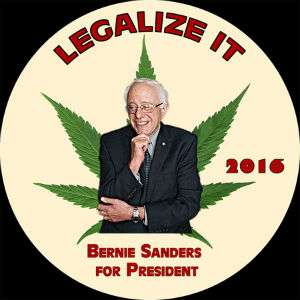 Legalize it!: Sanders in October 2015 became the first major-party presidential candidate to come out in favor of legalizing marijuana. Since then he introduced the Senate's first bill to repeal federal prohibition and has made ending the war on drugs one of his central issues.

Other bills/concepts backed: Co-sponsored (as did many 2020 competitors) Cory Booker's Marijuana Justice Act, which would expunge possession arrests from people's records, allow current pot prisoners to be resentenced, and withhold federal funding from states that crack down too vigorously on weed. Thinks "small business people in the African American [community] deserve to be part of" the corporate marijuana market.

Prohibition disconnect: Has questioned why non-marijuana cigarettes should be legal.

Inhaling status: "Didn't do a whole lot for me. My recollection is I nearly coughed my brains out, so it's not my cup of tea." 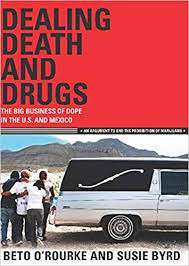 Legalize it!: O'Rourke was earlier than 99 percent of elected Democrats to the legalization issue, pushing the El Paso City Council in 2009 to at least study it, co-writing a 2011 book advocating legal weed, and successfully primarying an eight-term prohibitionist in 2012. He not only wants to remove federal prohibition, he'd also like the federal government to declare the plant legal across all 50 states, and then lead the international fight to "end the global war on drugs."

Other bills/concepts backed: As congressman, introduced a bill to end the federal government's policy of withholding highway funds to states unless they suspend the driver's licenses of drug convicts. Also co-sponsored various bills to seal criminal drug records, protect legal-weed states, allow doctors to prescribe pot to veterans, and remove possession convictions as a barrier to federal student aid.

Inhaling status: "Pot, yeah, there was definitely, you know….There was, uh, I don't know how to put this, but yeah. People smoked pot, but not habitually."

Legalize it!: Now, sure. But before gearing up to run for president? Ugh.

Other bills/concepts backed: The Marijuana Justice Act. Beyond that, "Harris has only co-sponsored one other cannabis-related bill: the SAFE Banking Act, which would protect banks that work with marijuana businesses from federal punishment."

Inhaling status: "I inhaled….It gives a lot of people joy, and we need more joy."

Legalize it!: "I think even in Indiana, criminal justice reform, including marijuana [legalization], we're probably there….I really think a state-wide campaign in Indiana would do well, especially on the criminal justice stuff. To find common cause between the younger, libertarian right that's not so sure about the Republican Party as an institution, and a more traditional, progressive coalition—I think you can get there on drugs."

Other bills/concepts backed: Well, the South Bend mayor is only 37 years old. Has talked favorably about commuting sentences and rehabilitating ex-cons once drug laws are changed.

Prohibition disconnect: Approved "an ordinance in 2017 that prohibited businesses in the city from selling synthetic cannabinoids."

Inhaling status: "I was standing outside my dorm. I was on my way home from a party or something….I ran into a friend and he had an acquaintance with him, and we were chatting, and at some point I noticed that she was smoking a joint. And just out of curiosity — there was like a little bit left — I was like 'Oh, is that…' And she handed it to me."

Legalize it!: Since 2017, yes, though as recently as 2016 she declined to endorse a Massachusetts recreational initiative (which she then later lied about); and in 2013 she was out-and-out tarring her Republican opponent as being soft on pot.

Other bills/concepts backed: Was the main Democratic sponsor of a bipartisan 2018 bill to removal federal prohibitions in states where marijuana is legal. Co-sponsored the Marijuana Justice Act, plus bills to deschedule weed, legalize pot-related banking, and conduct research aimed at getting veterans medicinal access.

Prohibition disconnect: Warren would like to create a huge new federal Office of Drug Manufacturing, which wouldn't necessarily start as the nationalized pot pusher-man, but….

Legalize it!: Cory Booker is the most far-reaching pro-legalization Democrat in the United States Senate, frequently joining with the libertarian-leaning Sen. Rand Paul (R–Ky.) on all manner of criminal justice reform. Has made his Marijuana Justice Act a centerpiece of his presidential run, and busted johnny-come-latelies like Kamala Harris for making jokes about the herb while people still rot in prison. Like O'Rourke, he was railing against the drug war in local politics more than a decade ago.

Other bills/concepts backed: Co-sponsored the landmark CARERS Act, which would protect state-legal marijuana operations from federal law enforcement. Would "absolutely" back mass marijuana-related pardons as president.

Prohibition disconnect: Has repeatedly expanded a law enforcement approach to the opioid crisis.

Legalize it!: "I support the legalization of marijuana and believe that states should have the right to determine the best approach to marijuana within their borders," she said in 2019. Twenty years ago it was a much different story.

Other bills/concepts backed: Co-sponsored the Booker/Warren Strengthening the Tenth Amendment Through Entrusting States (STATES) Act. Has backed measures to expand cannabis research and remove pot from the Controlled Substances Act.

Prohibition disconnect: As Hennepin County (Minneapolis) Attorney from 1999-2006, Klobuchar doubled the number of drug convictions. "We must keep a focus on drug dealers," she said in 2004. As senator, she has been one of the leading proponents of civil-liberties-restricting "sex trafficking" legislation.

Legalize it!: "Colorado and other states have shown we can sensibly legalize marijuana with reasonable controls."

Other bills/concepts backed: In favor of expunging drug-possession arrests from criminal records.

Prohibition disconnect: "Under his leadership, the Department of Housing and Urban Development (HUD) published a 2014 memo clarifying that owners of federally assisted housing facilities are required to deny entry to people who use marijuana, even for medical purposes in accordance with state law."

Inhaling status: "It's unknown if Castro has ever consumed cannabis, though he did write in his book that he hung out in college with a 'Jeff Spicoli' type."

Legalize it!: In one of the better campaign stunts in recent memory, the tech entrepreneur and robot-pessimist announced earlier this month that, "I would legalize marijuana and I would pardon everyone who's in jail for a non-violent, drug-related offense….I would pardon them all on April 20, 2021, and I would high five them on their way out of jail." Later, he clarified that this pertained only to marijuana-related convictions, but still—4/20 clemency day!

Other bills/concepts backed: Decriminalizing opioid use and possession.

Prohibition disconnect: Yang has some of the weirdest policy sets out there, including providing "guardrails to keep technology from corroding our mental and emotional well-being, particularly for young people," because smartphones are having a "devastating" impact on children.

Inhaling status: "No, no, I'm not really" a weed smoker, he said in a radio interview this month. "You know, I was a pretty geeky Asian dude."

Legalize it!: "The senator, who has an A grade from NORML, has become one of the most vocal advocates for federal marijuana reform in Congress, co-sponsoring multiple pieces of legislation and frequently talking about the issue in speeches and on social media. However, she did not start off her political career supporting cannabis reform."

Prohibition disconnect: Hoo boy. Gillibrand last month proposed a seven-day limit to pain prescriptions, which is one of the worst policy ideas in recent memory.

Legalize it!: The former Colorado governor "may be best known nationally as the guy who opposed marijuana legalization in his state but ultimately decided it was not the disaster he feared it would be."

Other bills/concepts backed: Supports the STATES Act, and further says that the laboratories of democracy should be able to decriminalize cocaine and heroin (and sex work!), which is unusually bold. Favors expunging non-violent convictions.

Prohibition disconnect: Even after his big policy turn, Hickenlooper signed a ban on pot gummy bears and animal-shaped edibles, and a reduction on the number of pot plants people can have in their homes. He vetoed a bill allowing for marijuana tasting rooms.

Inhaling status: "He wrote in his book about how his mother caught him attempting to grow marijuana during high school, how cannabis 'slowed me down and made me kind of silly' and how he 'got a little high' and took a nude selfie as part of a project for an advanced photography class in college."