Law forbidding businesses involved in medical marijuana distribution from giving to candidates in Illinois, or candidates accepting such money, challenged in federal court. 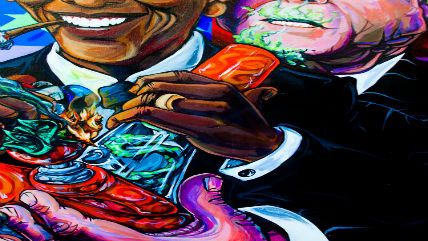 At the same time Illinois made it illegal for businesses in that industry to donate to political campaigns in the state, or for candidates to accept such money, either directly or via a Political Action Committee. One legislator involved in passing the law admitted this absurdly intrusive and First Amendment-violating rule was just to "appease 'conservative' and 'hesitant' colleagues."

In a case called Ball v. Madigan (Madigan is Lisa Madigan, Illinois' attorney general), two politicians with the Libertarian Party challenged that law in U.S. District Court for the Northern District of Illinois as the blatant First Amendment violation it is. Lawyers from the Liberty Justice Center and the Pillar of Law Institute are representing plaintiffs Claire Ball and Scott Schluter.

Ball was a candidate for comptroller who wanted to be able to receive campaign funding from people involved in medical marijuana distribution. Schluter was a candidate for the 117th state representative district in Illinois, and he wanted the same thing. As their original suit, filed last November, stated, they:

seek declaratory and injunctive relief to eliminate the chill this law creates in exercising their First Amendment rights. Were they free to do so, Plaintiffs would start soliciting and accepting campaign contributions now and in any future elections from medical cannabis cultivators and dispensaries.

The plaintiffs last week filed a motion for summary judgment in the case, which convincingly argues that the law is absurdly and obviously unconstitutional.

Illinois decided to ban but one class of political speakers—those favoring marijuana legalization—from engaging in the same sort of political association that is typically recognized and free from abridgement. This effort does not combat corruption. It only silences emerging voices and hinders competitive campaigns by unorthodox candidates. Under the First Amendment, this cannot stand…..

Nowhere in the [state's medical marijuana] law or in its legislative history is there any concern about medical marijuana organizations corrupting the political process of Illinois. This is understandable. For years, the use of medical marijuana has been criminalized and most sales or transactions have occurred on the black market. During that time, there are no known attempts by underground marijuana entities to unduly influence politicians in Illinois. There has been no ReeferGate. It is only now that an industry attempts to legitimize itself by bringing itself under public scrutiny, oversight, and regulation that Illinois has banned it from participating in the political process…

As per Citizens United, the filing notes:

The law being challenged should face "strict scrutiny" by the court, requiring that the law further a compelling state interest by the most narrowly tailored means possible.

This Court should subject the contribution ban…to strict scrutiny….the ban acts as a prior restraint against free speech and association by banning particular groups of people—medical cannabis organizations and candidates for political office— from giving and accepting campaign contributions. Any sort of prior restraint comes before a court with a "heavy presumption against its constitutionality." ….

Second, the ban is a content-based restriction on speech, which supports a strict scrutiny standard of review. The Supreme Court has "insisted that 'laws favoring some speakers over others demand strict scrutiny when the legislature's speaker preference reflects a content preference.'"

And there is no evidence of any compelling state interest being furthered by these prejudicial laws, the filing argues:

Defendants can produce no evidence that the contribution ban serves any anti-corruption purpose. Defendants' discovery responses reveal that the State has no legislative record or other evidence indicating that medical cannabis organizations were or are corrupting the political process of Illinois…Defendants only state theoretical and speculative concerns with no evidentiary basis, claiming, for example, that "medical cannabis cultivation centers and dispensary organizations give rises (sic) to threat of actual or apparent corruption greater than other businesses because the medical cannabis pilot program is new and untested"….

Such speculation fails to satisfy the government's burden and cannot justify the complete denial of the First Amendment right to support candidates through campaign contributions.

A Pillar of Law press release on the summary judgment motion filing.

Lawyer Benjamin Barr with the Pillar of Law Institute says in an email that he anticipates a victory for his clients on this motion for summary judgment to get Illinois to stop enforcing that law later this summer.

This case is about laws that try to create conflict between medical marijuana and the First Amendment. I've reported in the past on an ongoing case about how the government tries to use medical marijuana as an excuse to violate citizens' Second Amendment rights.