The Court's decision leaves motorists vulnerable to the whims of armed government agents who can stop them at will. 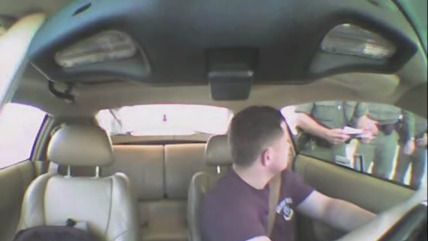 Today the Supreme Court passed up an opportunity to impose limits on a disturbing exception to the Fourth Amendment that allows random detention of motorists within 100 miles of a border—a zone that includes two-thirds of the U.S. population. Since the rationale for these stops is immigration enforcement, they are supposed to be very brief. Yet in 2010 Richard Rynearson, an Air Force officer who brought the case that the Court today declined to hear, was detained at a U.S. Border Patrol checkpoint in Uvalde County, Texas, for a total of 34 minutes, even though there was no reason to believe he was an illegal alien or a criminal.

In United States v. Martinez Fuerte, the 1976 decision that approved random stops at internal immigration checkpoints, the Court said "the consequent intrusion on Fourth Amendment interests is quite limited," because each stop "involves only a brief detention of travelers" during which "all that is required of the vehicle's occupants is a response to a brief question or two and possibly the production of a document evidencing a right to be in the United States." For those motorists who are not simply waved through, the Court said, "the average length of an investigation in the secondary inspection area is three to five minutes."

Given the importance that the Court attached to the brevity of the checkpoint stops and the limited nature of the inquiry, it is hard to see how Rynearson's detention could pass muster under the Fourth Amendment. Two minutes into the stop, Rynearson presented his military ID and his driver's license, placing them against the window on the driver's side door. That should have been the end of the stop, since a driver's license is the only form of identification motorists are legally required to carry, and Texas issues licenses only to U.S. citizens or legal residents. But the Border Patrol agent questioning Rynearson—identified in the lawsuit only by his last name, Lands—insisted those IDs were not good enough, at which point Rynearson offered his military and civilian passports.

Instead of immediately verifying the passports and sending Rynearson on his way, Lands and his supervisor, Raul Perez, detained him for another 23 minutes, much of which was spent on irrelevant calls to Rynearson's military base. It seems clear from Rynearson's recording of the encounter that Lands and Perez, irked by his insufficiently deferential attitude, decided to punish him by detaining him much longer than necessary while trying to get him in trouble with his employer. Rynearson, who had started recording his interactions with the Border Patrol because he was tired of being hassled at the checkpoint, declined to roll down his window all the way, declined to get out of his car, and repeatedly asked if he was free to go and, if not, why he was being detained.

When it rejected Rynearson's lawsuit against Lands and Perez last year, a three-judge panel of the U.S. Court of Appeals for the 5th Circuit described his behavior as  "unorthodox" and "unusually uncooperative." Dissenting Judge Jennifer Walker Elrod emphatically disagreed. "While he provided the information needed to prove his citizenship, Rynearson explained several times that he would not indulge the officers' commands when he thought that they exceeded the limited scope of the immigration checkpoint inquiry," she wrote. "Standing on one's rights is not an 'unorthodox tactic.' It is a venerable American tradition."

The 5th Circuit declined to decide whether Rynearson's rights were violated, saying only that the law on this point was fuzzy enough in 2010 that Lands and Perez deserved qualified immunity. The case therefore presented the Supreme Court with a chance to clarify when a checkpoint stop is so long that it violates the Fourth Amendment. The Court's precedents suggest that Rynearson's detention qualifies.

Regarding so-called Terry stops of pedestrians, which are justified by reasonable suspicion of criminal activity, the Court has said any investigation must be "reasonably related in scope to the circumstances which justified the interference in the first place." In the context of stops justified by suspected traffic violations, the Court has said "a seizure that is justified solely by the interest in issuing a warning ticket to the driver can become unlawful if it is prolonged beyond the time reasonably required to complete that mission." Last year it deemed unconstitutional a routine traffic stop that was prolonged by seven or eight minutes to facilitate an inspection by a drug-sniffing dog. The rule for the length of a detention should be at least as strict in the context of an immigration checkpoint, where stops do not require reasonable suspicion of a legal violation.

Rynearson argued that Supreme Court intervention was necessary to resolve a circuit conflict about the permissible scope of checkpoint stops. The 10th Circuit allows Border Patrol agents to "briefly question individuals" about "'vehicle ownership, cargo, destination, and travel plans'…as long as such questions are 'reasonably related to the agent's duty to prevent the unauthorized entry of individuals into this country and to prevent the smuggling of contraband.'" The 9th Circuit says the inquiry must be "confined to a few brief questions, the possible production of a document indicating the detainee's lawful presence in the United States, and a visual inspection of the vehicle…limited to what can be seen without a search." Both circuits say agents may exceed these limits only if they have reason to suspect illegal activity.

The 5th Circuit, by contrast, "permits agents to undertake inquiries that are plainly not related to any special duties of the Border Patrol with respect to immigration, including calling an employer to report an encounter. The Fifth Circuit held that the agents' actions were not clearly unreasonable even when the detention was measurably lengthened for an investigation that ranged far afield from any inquiry into authorization to be in the country." Rynearson also noted that in the 5th Circuit the clock does not start running on the length of the detention for Fourth Amendment purposes until after the motorist's legal presence in the U.S. has been established, a rule that "leaves agents free to pursue even unrelated inquiries that appreciably lengthen the detention, so long as those inquiries occur before the agent determines citizenship."

Another circuit split relates to the question of when a motorist's actions justify an extended detention. The 5th Circuit cited Rynearson's "unorthodox tactics" and defense of "his right against unlawful searches and seizures" as reasons to think his detention was not objectively unreasonable. The 3rd and 9th circuits, by contrast, "have recognized as clearly established that even if a detainee's conduct contributes to the length of a detention short of arrest, further detention that was neither caused by the detainee's actions nor the result of a reasonably diligent investigation would be prohibited."

The Supreme Court's decision to pass over Rynearson v. Lands leaves American motorists (especially those driving in the states that comprise the 5th Circuit) vulnerable to the whims of armed government agents who can stop them at will. "The net effect of the Fifth Circuit's decision is quite remarkable," Rynearson's brief concludes. "It permits the Border Patrol to conduct suspicionless seizures free of the constraints that obtain even for suspicion-based seizures—to hold someone more than 30 minutes for purportedly brief questioning, while spending most of the time pursuing unrelated inquiries and calling an individual's employer. Most troublingly, the Fifth Circuit allows agents to unreasonably extend a detention because an individual asserted his rights—all without even the barest minimum of individual suspicion at any time during the encounter."