D.C. Police Raided Hundreds of Homes Based on Little to No Evidence

In 284 cases over two years, officers used "training and experience" as justification for obtaining search warrants. 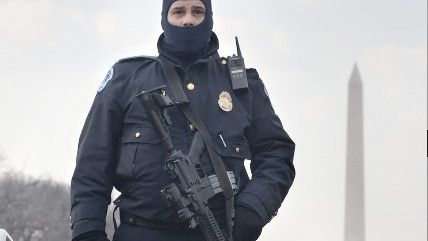 on the homes of almost exclusively black citizens in the nation's capital, with little to no hard evidence used to justify a search warrant, according to a recent Washington Post review.

The Post surveyed cases from January 2013-January 2015 in which a person had been arrested on a drug or gun charge and subsequently, a warrant was obtained to search a residence. Out of the 2,000 warrants examined, 14 percent of them (284 cases in all) cited officer "training and experience" as justification for searches on domiciles where no criminal activity was observed and that "The language of the warrants gave officers broad leeway to search for drugs and guns in areas saturated by them and to seize phones, computers and personal records." In the cases where a suspect's race could be determined, 99 percent were black.

In 12 cases, "officers acted on incorrect or outdated address information," leading to the dreaded wrong-door raid, and in 115 instances, no drugs are weapons were found at all. When drugs were turned up, the amounts "were usually small, ranging from residue to marijuana cigarettes to rocks of cocaine" and sometimes just paraphernalia.

Former Reasoner Radley Balko noted in a separate blog post that a number of residents had "difficulty getting the city to compensate them for damage police officers did during these raids, even when it was clear they had raided the wrong home."

The process for obtaining a warrant goes like this, officers get their hands on a suspect's address "by relying on the person's word, a driver's license or databases from law enforcement, schools, utilities or courts." Then, they go before a judge to plead their case that a search on a residence would turn up drugs and/or guns.

But, Eugene O'Donnell, a former NYPD officer, prosecutor and current professor of criminal justice says, "Police are going to push the limit." He adds:

Police are not civil libertarians, and these types of warrants are counter to what the Fourth Amendment is all about…

It's a mass-produced, search-and-recovery operation. It's an assembly line. It's not a progressive policy, and it imperils police and people alike.

Alec Karakatsanis, a lawyer with the non-profit Equal Justice Under Law, told the Post that the reliance on what are essentially uninformed hunches by police officers to justify heavy-handed raids on private residences is a violation of the Fourth Amendment's guarantee against unreasonable search and seizure. Karakatsanis says, "They have turned any arrest anywhere in the city into an automatic search of a home, and that simply cannot be."

In the name of getting drugs and guns off the streets, law enforcement have been increasingly empowered by municipalities all over the country to crash the front door first and ask questions later. Such aggressive tactics have led to scores of deaths and injuries of both police and civilians, and not even babies in their cribs are immune from state-sanctioned violence coming invading their homes.