The Kentucky senator says "there's no real reason to have a federal rule on that." 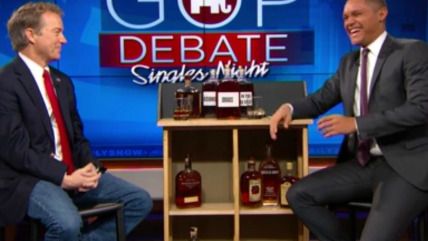 In his interview with The Daily Show's Trevor Noah last night, Rand Paul made his clearest public statement yet calling for an end to federal marijuana prohibition:

Noah: If Rand Paul was president, would it be illegal to smoke weed?

Paul: Not federally, and I think states would make up their minds. So for instance, Colorado right now has decided that it's not illegal. I think that's completely Colorado's purview. There shouldn't be federal laws against most things. In fact, when we started the country, we had laws against counterfeiting, against treason, and against piracy….

Whether or not Colorado decides to legalize marijuana really is their business, and there's no real reason to have a federal rule on that….States will develop different experiments or proclivities. Colorado might have it, but maybe Alabama is not going to have it. The good thing about it is it allows us to have a little bit different cultural norms in different parts of the country.

For years Paul has been saying that drug policy should be devolved to the states as much has possible and that states should be free to decide whether to legalize marijuana. Although repealing the federal ban is a logical implication of those positions, as far as I know this is the first time the Kentucky senator has explicitly endorsed that step.

So far Bernie Sanders' Ending Federal Marijuana Prohibition Act, the first bill of its kind in the Senate, has no cosponsors. Maybe Paul will be the first.

Paul's position is actually more radical than Sanders', since he seems to be saying (as his father does) that neither marijuana nor any other drug should be prohibited at the federal level. And that's just for starters. "There shouldn't be federal laws against most things" covers a lot of territory.