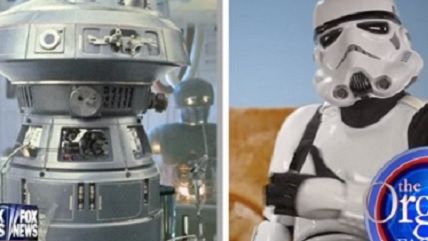 We are on Day Five of Reason's annual Webathon. We're asking readers to provide $250,000 in tax-deductible donations between now and December 8, so that we can keep bringing you the very best libertarian news, analysis and commentary.

Created by Reason TV's Meredith Bragg and Austin Bragg, and Andrew Heaton (who also stars), it's a great example of one of the major things we do through our investigative reporting, commentary, and analysis. We're trying to be your voice in public debates over politics, culture, and ideas, making sure that the principled libertarian case for "Free Minds and Free Markets" is getting the best hearing it can.

What? Aren't we talking about a fricking hilarious (IMHO) video? Yes, yes, we are.

This video is a perfect example of how to do a couple of things I've argued the conservative side of the political spectrum really needs to start doing if they want to get things in this country turned around:  engage the culture and take advantage of the numerous new platforms available to people who want to get their message out there.  By hooking into Star Wars, they tied their ideas in with a big cultural phenomenon, and by putting it out on Youtube, they exploited the power of viral videos.  It also comes across just self-deprecating enough that people who might not like libertarianism can still laugh at it and not feel like somebody is trying to preach to them.

So all in all, great job Reason.

(More plaudits in that vein here.

Yes: engage the culture you want to change.

In fact, even more than that: create the culture you want to see.

For decades, Reason has been celebrating every advance, big and small, that has let us all create and consume the culture that we want, not simply what powerful political, corporate, and cultural gatekeepers what us to watch, read, or hear. Indeed, Reason itself was founded in 1968 by a Boston University student named Lanny Friedlander who took advantage of new breakthroughs in printing and design technology that lowered prices and made "small" magazines and alt-papers easier than ever to produce.

In 1999, we documented and reveled in the "culture boom" even as many on the right and left were damning the end of "a common culture" and the "end of standards." Instead, we thought it was a good thing that cable TV channels were exploding, that video rental stores had created mini-cinematheques in every town in America, and the little-understood Internet and World Wide Web were revolutionizing every aspect of culture. All of this ended up causing the figurative death of the test pattern—that symbol of cultural dead space, when nothing was happening—and gave us infinite choices when it came to music, movie, film, writing, and other forms of creative expression.

The potential for exit—to go elsewhere—heavily conditions the terms of exchange between producers and consumers; in effect, it forces the producer to provide better terms for the consumer and hence disperses power throughout a system. One reflection of this is the relatively recent and increasingly widespread practice of discounting books. Another is the way that producers must adapt to survive changing tastes. Consider a culture industry giant such as Disney, which rebounded from near-bankruptcy in the late 1970s and early '80s. Disney had to start once again making films that audiences actually wanted to see (out with The Black Hole and Tron; in with The Little Mermaid and The Lion King). But it has also flourished by expanding the range of material it is willing to finance. Hence, through its subsidiary Miramax, it has seen fit to help produce and release such quintessentially non-Disney films as Priest, Kids, and Pulp Fiction.

…more important, an increase in the possible sites for cultural production and consumption does allow people to go elsewhere. The effective breakdown of the state church in England did not cause the differences among sects, some of which were so deeply held that dissenters shipped out to the New World. Rather, it created a society in which differences could be given voice and debated. Today, it has become increasingly easy for individuals to "make" their own culture, either through actual production or increasingly differentiated patterns of consumption.

As the incredible production standards of our Star Wars video attest, it's only gotten easier for folks with relatively little money or contacts to create work that is indistinguishable from stuff coming out high-end studios. The culture boom was only getting started back when we first named it, and the sky is the limit in using creative ways to get our libertarian messages out into the world in all sorts of new, different, and interesting ways.

Back in 2010, for instance, we were able to perfectly mimic the look and feel of UPS' famous "whiteboard" commercials. Where UPS was using the motif to sell their services, we used it to teach a quick, fact-rich lesson about how government regulations vastly complicate not just the cost of doing business but how you can do business:

And then there's three-dozen-plus videos we've done over the years with Remy, the musical satirist who never met a politician he liked or a song he couldn't improve.

If you care about creating a world in which libertarian ideals of maximal freedom and minimal coercion carry the day, think about supporting Reason, the nation's only journalistic venture that's dedicated to "Free Minds and Free Markets." Every day of every year, we're out here making the case for shrinking the size, scope, and spending of government and giving all of us more power to live our lives peacefully and however we see fit.

Sometimes we do that by calling attention to shoddy work by outfits such as The New York Times and forcing them to cop to their mistakes. Sometimes we do it by appearing on shows such as HBO's Real Time with Bill Maher and mixing it up with folks such as Rachel Maddow. Hell, sometimes we do it be helping to create, as Matt Welch did, the first daily libertarian talk show on cable news.

But we always do it at Reason magazine, Reason TV, and Reason.com where we produce thousands of pieces a year that engage the culture—popular culture, political culture, business culture—and show the power of libertarian ideas to make the world anew.

We can't do that without your help.

We are on Day Five of Reason's annual Webathon. We're asking readers to provide $250,000 in tax-deductible donations between now and December 8, so that we can keep bringing you the very best libertarian news, analysis and commentary.