God didn't reduce gun-violence rates to their lowest levels in 20 years. People and smart policies that liberalized gun laws did that. 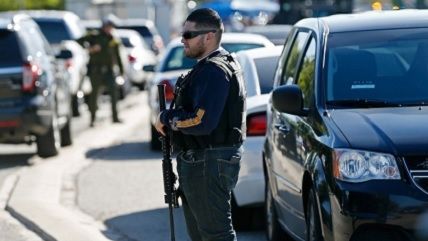 Today's early front page of The New York Daily News created a stir on Twitter and cable news but it's not just a provocative, in-your-face assemblage (of the sort you should expect from a gritty New York-based newspaper).

It's also absolutely correct, though not in the way it intends.

Whether your believe in him or not, God is not "fixing" the problem of mass shootings—or any other policy issues that we face here in America and around the world. That is properly the province of men and women in the political and private spheres.

And the fact of the matter is that when it comes to gun-related violence, the situation today remains far better than it was 20 years ago. A couple of truly disturbing and deadly events don't change that.

The only counter-trend in all this regards suicide by gun rate, which has been basically flat over the same time.

To be clear: God did not reduce the gun-violence rates over the past two decades any more than he drove rates up in previous years. Human beings and better, more-open policies toward gun ownership helped to accomplish that.

That gun violence rates have plummeted during the exact period when virtually every state and locality liberalized the conditions under which more types of people could buy and legally carry guns doesn't definitively prove that more guns equals less crime (correlation doesn't necessarily prove causation, natch). There are all sorts of factors involved. But it does show that increasing the number and amount of guns in circulation, and increasing the number and types of people who can legally carry guns in more situations has not led to increased gun violence.

And it does prove that the writers of newspaper headlines about "cowards who could truly end gun scourge " aren't really looking at exactly the sorts of policies that have massively reduced the carnage that's rarer now in America than it used to.

In 2011, after the shooting of Rep. Gabrielle Giffords in an Arizona parking lot unleashed a torrent of wildly uninformed and mostly wrong immediate response, Reason TV released "5 Rules for Coping With Tragedy." As we wait for more information about the horrible attack in San Bernardino, it's worth watching.