Should There Be *Any* Limits to Self-Fashioning?: Al Roker as Charlie Brown Edition

The Today Show tests the limits of tolerance and pluralism. And movie tie-ins. 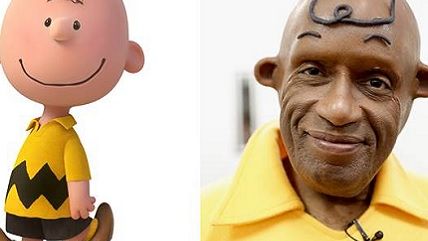 Most of us here at Reason take a very broad, latitudarian approach to human existence: Anything that's peaceful and all that jazz, don't you know.

Indeed, the secret of success in "the West" (however defined) may well be the way in which classical liberalism created a system by which people are basically allowed to do whatever they want as long as they are not directly impinging on other people's right to express themselves. Toleration and pluralism goes a long way to creating a world in which people with very different ideas of the Good, the True, and the Just can get along without killing one another. To the extent that libertarianism is an outgrowth of battles over religious freedom in 17th-century England, it's totally rooted in ideas about the rights of individuals to worship (or not) God as they see fit, to associate in voluntary ways, and to be given the benefit of the doubt when it comes to choosing among competing conceptions of the good.

And then there's the way in which various Today Show hosts dressed up as Peanuts characters today. Whether it's confessed-sharter Al Roker dressing up as Good Ol' Charlie Brown or Matt Lauer dressing up as fussbudget extraordinaire Lucy Van Pelt, the costumes these folks donned today may well test the limits of libertarian embrace of the weird and the wonderful.

Beyond the fact that this is all part of a transparent marketing ploy for the sure-to-disappoint 3D Peanuts movie that will soon be darkening theater screens across this great land of libertah, let's end with a question for committed libertarians this night before Halloween proper: What is the outer limit of your acceptance of letting people do whatever the hell they want? At what point, if any, does terrible, terrible freedom make you throw up at least a little in your mouth?