The home of a speed trap and a jail-for-hire tries to adjust. 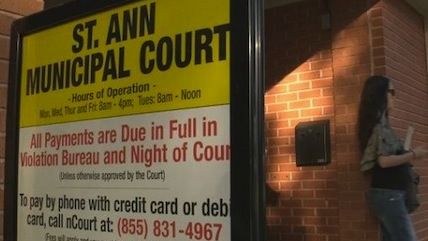 This past summer, Missouri's governor signed a reform to rein in some of the abuses in the state's municipal courts, misbehavior that had attracted a lot of attention in the aftermath of the Ferguson riots. Previously, towns could not take more than 30 percent of their revenue from traffic fines. As of next year, the ceiling across the state will be 20 percent, and in St. Louis County 12.5 percent.

Though the change hasn't taken effect yet, The Huffington Post reports that it

has already had an impact on one of St. Louis County's most notorious—and lucrative—speed traps….The speed trap in question is a tiny stretch of highway in St. Ann, whose population is less than 13,000. Police patrol that tiny portion of the highway near the airport, which has been a reliable source of money, helping to replace millions in lost sales tax revenue after a mall shut down….

Officials in St. Ann are adjusting to the new reality—but only begrudgingly. Police Chief Aaron Jimenez told The Huffington Post he has "mixed feelings" about the effects of SB5. He anticipates that his annual budget—most of which came from tickets his department issued on the small stretch of highway—would take a seven-figure hit.

"Because of Senate Bill Five, I jumped out ahead because I knew I was losing $1.5 million dollars out of my budget," Jimenez said. "I had to lay off 10 officers. Half of them were able to retire."

The article also notes the effects of another change, this one brought not via legislation but through the courts:

A related issue is the St. Ann jail, which came under scrutiny for using set bail amounts to keep poor people behind bars for minor offenses. In particular, holding poor people on behalf of other municipalities had been a significant source of revenue for the city.

The groups Equal Justice Under Law and Arch City Defenders brought a civil rights lawsuit against St. Ann for holding individuals who cannot pay their pre-set bail, which the suit alleges is in violation of the Constitution. Thanks to a resulting court order, St. Ann now has to release anyone arrested on an unsecured bond or on their own recognizance "as soon as practicable after booking," except if the person appears before a judge within 24 hours or under other specific circumstances.

As a result, the population of the jail has diminished considerably.

"For the first time in St. Ann history, in the 19 years that I've been here, we've had zero prisoners starting [last month]. Once in a while we'll have three or four," Jimenez said.

To read the rest, go here.

Bonus link: I discussed such reforms in a Reason piece last year, arguing that they would do more good than the idea, very popular in the pundit classes, of pushing through a sweeping consolidation of the St. Louis region's local governments.