The DemDebate Clarified That Many Libertarian Views Have Gone Mainstream

Clinton, Sanders, Webb, O'Malley, and Chaffee are nobody's idea of small-government crusaders, but they got some things right. 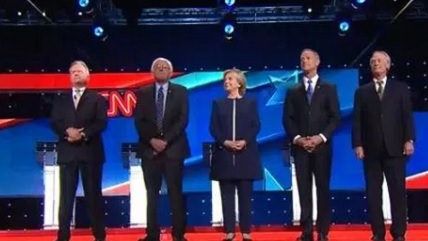 Watching the just-concluded Democratic Debate on CNN wasn't exactly exciting, but it was clarifying. It showed the wide appeal of various positions that have long been the province mostly of lonely libertarians.

When it came to endless wars and constant buildup of defense spending, for instance, or the need to end awful criminal-justice policies, or to be more humane and welcoming to immigrants, many of the Democratic presidential candidates hit notes that could have been sung by Milton Friedman or Gary Johnson, the former two-term New Mexico governor who pulled 1 million votes in 2012.

It was nothing less than bracing to hear the self-described democratic socialist Bernie Sanders and former Republican Sen. Lincoln Chafee defend votes against the invasion of Iraq. Vietnam vet and former Virginia Sen. Jim Webb is nobody's idea of a pacifist, but he too talked seriously of using the Department of Defense as, well, a form of national defense, instead of as a perpetual first-strike force. Tonight's event actually had the temerity to acknowledge the failure of 21st-century U.S. foreign policy, even as one of its major architects was right there on stage. With the exception of Rand Paul, the Republican candidates haven't dared cross that line.

All of the Democrats, even frontrunner Hillary Clinton who has attacked the idea of granting illegal immigrants driver licenses in the past, were far more libertarian toward immigrants than anybody in the Republican hunt. That's a shift, especially for a Democratic party that long saw low-skill immigrants as a threat to union workers. The GOP, once upon a time a party in which George H.W. Bush and Ronald Reagan would outdo each other in praising even illegal immigrants, should be ashamed of itself. All its potential presidents can do is talk about building a bigger, thicker, and ultimately ineffective wall on the U.S.'s southern border (that is, when they are not floating the idea of walling off our border with Canada). Overwhelming numbers of Americans favor granting illegals a pathway to legal status, if not outright citizenship. That sort of welcoming libertarian attitude is firmly in the American grain and a party that is so adamantly hostile to newcomers does not have a bright future in an increasingly globalized world.

When it came to drug policy, or at least recreational pot, the Dems were far more libertarian than their Republican counterparts. Hillary Clinton, ever the frowning schoolmarm, can't quite bring herself to acknowledge the failure of the drug war or embrace legalization, but even she granted the legitimacy and efficacy of medical marijuana. Too many Republicans either are flat-out against legal pot or hide behind dodgy federalist positions that are constantly shifting depending on the issue at hand (it's OK if states want to enact anti-immigrant statutes or anti-gay marriage bans, but not OK if they want to legalize pot). Chaffee actually offered Edward Snowden a free ticket home and Sanders, while stopping short of such amnesty, also had good words to say about the guy. Webb and Sanders were passable on gun rights.

Yet despite passing agreement on various issues, there wasn't a single Democrat on tonight's stage for whom I would seriously consider voting.

Again and again, their answers seemed to be mostly wilted salads of buzzwords—BILLIONAIRES! GLASS-STEAGALL! FAMILY LEAVE!—that they emitted on a regular schedule, like air fresheners in public toilets. The economic plans of everyone up there tonight ranged from terrible to truly awful. Unsurprisingly, Sanders couldn't go more than four or five words without denouncing the "handful of billionaires" he swears are running every aspect of the country. Clinton explicitly called for taxing the rich and completed her latter-day turn to progressive populist by pushing for free and reduced-price money for everything from college to daycare to maternity leave. When not sidestepping his own awful record as an over-policing mayor of Baltimore, O'Malley couldn't stop talking about building an electric grid so clean you can eat off it.

But in ultimately disappointing libertarian viewers, the Democrats were simply providing balance to the Republican contenders. The GOP crew similarly sometimes makes common cause with libertarians, yet it too veers off shared territory soon enough. Yes, Republicans typically talk a good game when denouncing the size, scope, and spending of government buth when it comes to defense spending and waging war, they are as far from libertarians as the Democrats are when it comes to economic and regulatory issues. Virtually all of the Republican candidates are truly awful on immigration, with some such as Trump rarely missing an opportunity to dehumanize Mexicans who come here to better their lot in life. The GOP is almost unanimously  godawful on marriage equality and drug legalization, too, and dips into crony capitalism when it comes to ethanol subsidies and other perks favored in early-voting states.

But to stress the differences between small 'l' libertarians and Democratic and Republican candidates for president is to look for love in all the wrong places.

The fact is that each party is espousing an increasing number of positions that fit within a consistent libertarian approach to the role of government. Given the increasingly shrinking number of people who cop to being pure Democrats or Republicans, we should be looking at policies not parties or politicians. The consensus against interventionist foreign policy is building, just as the country is moving toward pot legalization and social tolerance. Very few of us believe that we can endlessly fund the massive entitlement spending we already have, let alone toss on whole new programs to bail out student borrowers. Between tonight's debate and what we've seen of the GOP's presidential candidates so far, libertarians can take some real comfort in the fact that each party is ripping us off more and more with every passing election.