Why Was There a 12-Year Gap in the Gun Debate? 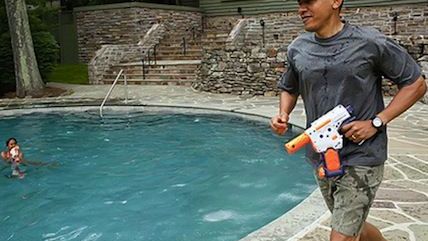 When Hillary Clinton unveiled her plans for new gun controls yesterday, she sounded a nostalgic note for her husband's years in the White House. "There are a lot of ways for us to have constitutional, legal gun restrictions," she said. "My husband did. He passed the Brady bill, and he eliminated assault weapons for 10 years. So we're gonna take them on. We took them on in the '90s. We're gonna take them on again."

Some voters, listening to this, might wonder whether anyone was taking "them" on after the '90s ended. The short answer is: not really. Oh, the anti-gun lobby was still around, and they would occasionally send me lonely-sounding press releases. And some fights still flared up over local laws, with two of those battles making it to the Supreme Court. But as far as national politics were concerned, there was a great gap in the gun debate: a period of more than a decade when Washington did not see a significant push for new restrictions on the right to bear arms.

As with any historical period, we can argue about when exactly this started and stopped. But if precise dating is your thing, you can say it began on November 7, 2000, and ended on December 14, 2012. The first is the day Al Gore failed to carry his home state of Tennessee, a loss many observers blamed—along with his losses in several other swing states—on his support for stricter gun laws. The second is the day of the Sandy Hook massacre.

Gore's defeat may have convinced the Democratic establishment that gun control was a losing issue, but this wasn't simply a matter of centrists backing down from a fight. When Vermont Gov. Howard Dean briefly roared into the lead in the 2004 primary season, damning the me-tooers who had endorsed the Iraq War and claiming to represent the "Democratic wing of the Democratic Party," he simultaneously touted his history of getting NRA endorsements. When the left-wing netroots who assembled themselves behind Dean moved on to other races, their movement's darlings included such figures as Brian Schweitzer, Jon Tester, and Jim Webb, all of them fairly friendly to gun rights. While their exact opinions varied, the standard line was that different regulations may be appropriate in different parts of the country, that their parts of the country were quite happy with their weapons, and that the feds should pretty much butt out.

Further left than that, you could still hear remnants of the old '60s arguments that gun control is racist and gives too much power to the police. (I wouldn't necessarily say this was the dominant position in radical circles, but it wasn't an unusual one either.) And the average left-tilting intellectual sort, the kind of person who doesn't get involved with politics herself but reads magazines like The Atlantic or Harper's, had plenty of opportunites to encounter liberal-friendly arguments that gun laws don't work very well or that the Second Amendment really does protect an individual right.

By 2007, the Democratic Party was capable of issuing a press release mocking Mitt Romney as a Johnny-come-lately on gun freedoms. (Sample quote: "Romney's decision to duck the NRA meeting raises important questions. Was Romney afraid to be ridiculed by real NRA members over his claim to have been a hunter 'pretty much all my life,' despite having never been issued a hunting license and having been on just two hunting trips? Or was Romney simply trying to avoid explaining his real record on gun control issues?") The trend did not end when a Democrat entered the White House. In Barack Obama's first term, the president's most notable acts related to gun rights were to sign a bill allowing people to bring loaded weapons into national parks and a bill letting Amtrak passengers pack firearms in their checked baggage. The latter reversed a ban put in place after 9/11, making Amtrak the one place where Obama's policies have been more gun-friendly than George W. Bush's.

That was then, this is now. The ground started to shift with some high-profile shootings in 2012, and the dam burst with the massacre at Sandy Hook.

When I say the ground started to shift, I'm not referring to mass opinion: According to the Pew Research Center, public support for gun rights actually increased after the Connecticut killings. Nor had the general patterns of American crime changed substantially: While the number of gun homicides did go up slightly in 2012, the next year saw the figure resume its decline. But the anti-gun lobby was energized, and we began to see a change in the sorts of positions a Democrat was expected to take. Each of the party's prominent presidential candidates except Webb—even Bernie Sanders, who had been relatively pro-gun for much of his career—has started calling for new controls, harking back to the sorts of proposals we saw the last time a Clinton was president. Hence Hillary's promise to "take them on again."

Pleasing as this may sound to some parts of the Democratic coalition, other activists on the left have been wary. Bill Clinton's gun controls were tightly linked to his tough-on-crime posturing; indeed, by driving Republicans to oppose what was presented as law'n'order legislation, they were a classic case of Clintonian triangulation. His assault weapons ban, a law generally regarded as having no notable impact on crime rates, was embedded in the crime bill of 1994, a law that did so much to amp up incarceration that the former president eventually apologized for its effects. His Gun-Free Schools Act, also passed in 1994, helped launch the era of zero tolerance and the school-to-prison pipeline. Basically, the Clinton-era anti-gun rhetoric that this year's candidates have been reviving overlapped heavily with the Clinton-era carceral policies that the candidates have made a big deal of rejecting. And the more the party's leaders flirt with ideas like an Australian-style confiscation of weapons, with all the intrusive policing that would require in a gun-loving culture like America's, the more that tension will look like a full-fledged contradiction.

But if the dozen-year gap in the gun debate can be forgotten, I suppose the context of the last war on guns can go down the memory hole too. This is how the battle lines look today, and this is how they're going to keep looking—until the next time everything suddenly changes.