The Government Is the Other Villain in Volkswagen's DieselGate Scandal

It's not the company's greed, but the bad incentives produced by aggressive regulations that are to blame 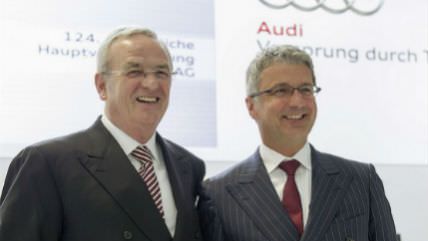 In the mainstream media's telling of the Volkswagen scandal, VW cheated on its diesel emissions standards because

it is a greedy, nickel-grasping company that wanted to cut corners to boost its bottom line. But blaming greed for VW's actions is like blaming gravity for someone falling off a cliff after a good shove.

The fact is that EPA's crazy emissions mandates shoved VW off a cliff and, if its regulatory authority is not curbed, more companies are going to follow suit, I note in my morning column at The Week.

Drivers want cheap, safe, powerful cars. That is exactly what the EPA's NOx standards made it very difficult for VW to produce. Meeting the agency's aggressive 2008 edict would have required the company to install a urea tank to neutralize the nitrogen oxide before release. But that would have not only bumped the prices of cars in a mid-range category, it would have diminished fuel economy, and made the cars far less zippy (since the engine is forced to divert power to the tank).

For a company like VW that was desperately trying to gain a toe-hold in a diesel-unfriendly country like America, EPA's NOx standards obviously posed a very difficult dilemma.

But these regulations aren't the only ones that are going to put carmakers at war with their own customers. Federal regulators (NHTSA specifically) have become overly aggressive on virtually every front. For example, new CAFE standards for light trucks have forced automakers to use lightweight material in the body. This makes it difficult to make safe trucks that can pass federal crash tests.

Some speculate that the Obama administration is determined to regulate away both gas and diesel engines from the market to induce a switch to electrics. Even if the administration isn't trying to outlaw these engines, if companies can't find cost-effective technologies that satisfy such regulatory edicts without pricing drivers out of the market, notes auto expert Sean McAlinden, they might well start flouting the law.

So if Congress wants to curb the growing contempt for federal regulations, it has to go after the out-of-control EPA as much as VW.