But even the New Jersey governor concedes "the war on drugs has been a failure." 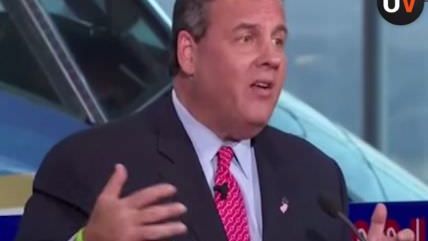 During last night's Republican presidential debate, three of four candidates who addressed marijuana legalization—Rand Paul, Jeb Bush, and Carly Fiorina—agreed that the issue should be left for the states to decide. The outlier, as usual, was New Jersey Gov. Chris Christie, who has promised that if he is elected president he will vigorously enforce the federal ban on marijuana in states that have legalized the drug.

Furthermore, as Rand Paul pointed out during the debate, Christie as president would override the medical marijuana law he now claims to support as governor. Federal law makes no distinction between medical and recreational use, and Christie has said he would enforce federal law. Among other things, that means raiding the "alternative treatment centers" that supply marijuana to New Jersey patients, seizing the properties, and prosecuting the people who run the centers for multiple felonies. Given Christie's warning that Coloradans will no longer be able to smoke pot under his administration, his crackdown might even mean arresting patients for possessing a plant that New Jersey recognizes as a medicine but the federal government does not.

Jeb Bush, who unlike Christie says states should be free to set their own marijuana policies, also suggested that he supports access to the drug for bona fide patients. Although he opposed a 2014 Florida ballot initiative that would have legalized medical use, Bush said, he supported a law authorizing the use of low-THC, high-CBD cannabis oil as a "last resort" for patients with epilepsy or cancer. That program, assuming it's implemented, will not help patients with other conditions or patients who need THC for symptom relief. Still, it's telling that pretty much everyone (including former drug czar Bill Bennett) feels compelled to support some kind of access to cannabis-based medicine, a policy that has long been favored by a large majority of Americans.

It is also significant that Paul, Bush, Fiorina, and Christie all were at least implicitly critical of the war on drugs, supporting treatment rather than jail for addicts—"more rehabilitation and less incarceration," as Paul put it. "I'm for rehabilitation," Christie said. "I think the war on drugs has been a failure." What Christie means by that, of course, is not quite the same as what Rand Paul (or even President Obama) means. Furthermore, the "drug court" system that all four candidates seemed to support relies on the continued criminalization of drug users, who are forced to choose between jail and treatment.

On a related point, Bush never managed to address the "hypocrisy" issue raised by Paul (not for the first time): Although Bush, a rich white guy, admits he smoked pot with impunity in high school, he supports the criminalization of cannabis users, which disproportionately affects poor blacks and Hispanics. "The people going to jail for this are poor people, often African-Americans and often Hispanics," Paul said. "Yet the rich kids who use drugs aren't." That gave Bush an opportunity to say that he, like three-quarters of the population, does not think pot smokers should be treated like criminals. But that would raise an obvious question about his continued support for pot prohibition: If using marijuana is not a crime, why should it be a crime to help people use it?