Jim Ardis was determined to shut down a Twitter parody and punish the man behind it. 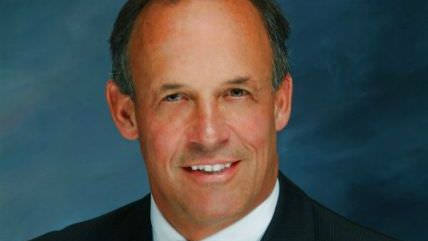 Peoria Mayor Jim Ardis' illegal retaliation against a man who created a parody Twitter account using the handle @peoriamayor will cost the city $125,000 under a settlement announced last week. Jon Daniel set up the account on March 9, 2014, as "a joke for me and for my friends." The humor, as the ACLU of Illinois explained in the federal lawsuit it filed on Daniel's behalf, was based on the juxtaposition of "the mayor's clean-cut image" with "tweets conveying in a crude or vulgar manner an exaggerated preoccupation with sex, drugs, and alcohol." Examples:

I'm thinking it's a tequila and stripper night it's jimmy baby

Im bout to climb the civic center and do some lines on the roof who's in.

Gotta a condo round my wrist girl and im cashing out.

Ardis was not amused. He did everything in his power to shut down the Twitter account and punish the man behind it, instigating and egging on a police investigation that revealed Daniel's identity and whereabouts. On April 15, 2014, police searched Daniel's apartment, seizing mail, telephones, and computers. They arrested and interrogated him the same day, ostensibly on suspicion of impersonating a public official, a crime punishable by up to a year in jail. Local prosecutors declined to pursue the case because Daniel had not violated the relevant statute, which requires that the offense be committed in person.

Illinois courts also have interpreted the law as applying only to conduct intended to deceive the public. "Mr. Daniel had no intention of deceiving people into believing the account was actually operated by a representative of the mayor or the mayor himself," the ACLU complaint notes, "and no reasonable person could conclude such an intent from the content of the tweets or the Twitter account's profile page." Just in case, Daniel added the warning "parody account" to the profile page a few days after launching @peoriamayor. As Daniel's complaint explains for the benefit of possibly Twitter-unsavvy judges, this sort of thing is not exactly unheard of:

There are many parody accounts, which often use pictures of the person they are parodying in their profile, including of Barack Obama (@ThePresObama), sports figures (@drunkcutler), and local politicians (@MayorEmanuel). These accounts are often, but not always, marked "parody" or "fake" in the biography. Twitter explicitly allows parody accounts, and permits them to be explicitly designated as such. Twitter also marks with a "check" the real accounts of certain influential people. See e.g.@RahmEmanuel. Daniel's parody was not unusual in this flourishing on-line community.

Despite these embarrassing facts, which indicate that Ardis sought to jail Daniel for nothing more than speech that offended him, the mayor initially defended the investigation, search, and arrest, noting that a local judge had approved all the necessary warrants. "We took every step in accordance with the law," the mayor's lawyer told Ars Technica in August 2014. "They appropriately went to the court to obtain warrants. The court reviewed the statute and evidence and made a determination. In the end, that's a judge's determination to issue a warrant or not. It's not unreasonable that a person would look at that statute to see if there was a violation."

While the judge obviously deserves blame for rubber-stamping these warrants without considering whether police were alleging an actual violation of the law, this unconstitutional vendetta was initiated by Ardis because he couldn't take a joke. As ACLU attorney Karen Sheley observes, "Hurt feelings do not free government from the responsibility of respecting Mr. Daniel's freedom of speech and freedom from being arrested for that speech." It's too bad that Ardis is not personally on the hook for the $125,000 settlement, which will instead be covered by taxpayers. That's on top of at least $50,000 the city already had spent defending against Daniel's suit, and it does not include the police resources wasted on the case, which probably could have been used to pursue threats to public safety more serious than a bunch of sophomoric Twitter jokes.

The settlement agreement, which the Peoria City Council is expected to approve tonight, also requires the city to instruct police that "the First Amendment protects many forms of online speech, including Parody and Satire when the parody or satire is reasonably perceived." Sheley says "the directive makes clear that parody should never be the predicate for a criminal investigation and that the action against Mr. Daniel should never be repeated."