Libertarians are changing the face of legal conservatism. 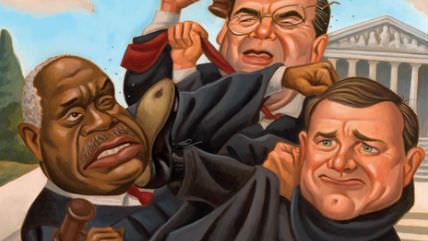 Writing in the latest issue of The New Republic, left-wing journalist Brian Beutler takes note note of the libertarian-conservative legal debate that Reason readers have been well aware of since at least my July 2010 cover story on the issue. As Beutler observes, just a few years ago, libertarian legal scholars such as Georgetown's Randy Barnett were "on the fringes of conservative legal thought." But the times they are a-changing. Nowadays, Beutler observes,

their views are taking hold within the mainstream of our politics. Barnett and his compatriots represent the vanguard of a lasting shift toward greater libertarian influence over our law schools and, increasingly, throughout our legal system. They're building networks for students and young lawyers and laying the foundation for a more free-market cast of federal judges in the next presidential administration. Their goal is to fundamentally reshape the courts in ways that will have profound effects on society.

Predictably, Beutler's story is framed as a warning to The New Republic's liberal readers. Watch out! The libertarians are gathering outside the gates! Refreshingly, however, it appears as if Beutler at least tried to portray libertarian legal ideas in a fair manner. That's not to say his piece is free from error. Rather, his errors mostly appear to stem from his own misunderstanding of legal issues, not from any desire to mischaracterize the views of his opponents.

Perhaps Beutler's biggest error is his repeated mislabeling of libertarian opposition to overreaching federal legislation as "Lochnerism," a reference to the Supreme Court's 1905 decision in Lochner v. New York, in which the Court struck down a maximum working hours law for violating the right to liberty of contract. While it is true that libertarian legal thinkers generally approve of Lochner (read my defense of the decision here), Beutler misses the rather important fact that Lochner dealt with a state law and therefore centered on the meaning of the 14th Amendment, which applies only to state action. Libertarian criticism of federal regulation (including the New Deal) tends to center on the original meaning of the Interstate Commerce Clause, which applies to Congress. In other words, these are wholly different constitutional provisions that have produced wholly different lines of constitutional arguments and cases.

This distinction matters—a lot. Plenty of conservatives today are willing to sign-on to libertarian-led campaigns against overreaching federal laws. But not all of those same conservatives are willing to join the libertarians when it comes to limiting state regulations. Why? For one thing, the use of the 14th Amendment against the states is closely associated with such "liberal" cases as Griswold v. Connecticut (1965), in which the Court protected the unenumerated right to privacy, and Lawrence v. Texas (2003), in which the Court struck down that state's ban on "homosexual conduct." To say the least, Borkian conservatives are quite leery of any legal arguments—including libertarian arguments for liberty of contract—that might give aid and comfort to "liberal judicial activism."

This might all sound like nitpicking to a non-legal writer such as Beutler. But I can assure him that recognizing these distinctions is essential if he wants to properly understand what's happening inside the conservative legal movement. In fact, I'd be happy to recommend a book on this very subject.