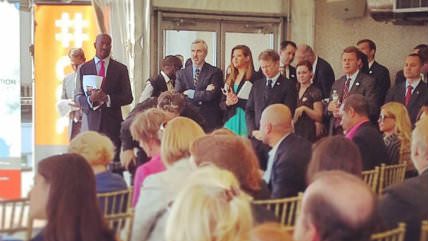 Wilson, now a program associate at Californians for Safety and Justice, was married to Dan Niemi, a San Leandro police officer who was shot and killed while on duty in 2005. Wilson says that at the time, she was a conservative who believed in how the U.S. criminal justice system worked. But although her husband's killer was caught and convicted—he's now awaiting the death sentence (a fact which Wilson says brings her no joy now, though she pushed for it during his sentencing)—coming to terms with Niemi's death eventually changed Wilson's perspective. "I was really wrong about how our system works," she told the crowd yesterday.

The then-23-year-old who shot her husband, Irving Ramirez, had been in and out of incarceration since he was young, mostly for drug charges such as meth possession. When Niemi showed up about a noise complaint, Ramirez was on probation—and carrying two handguns and some drugs; he shot her husband because he didn't want to go back to jail.

At first wondering why he was ever let out in the first place, Wilson now wonders why he had to go in. "I can't help but think how my life would be different, and my children's lives would be different… had we passed Proposition 47 years before," she said, referring to the California ballot measure passed in November 2014 that reduced most "nonserious and nonviolent property and drug crimes" from felonies to misdemeanors.

"I don't think that anyone can tell me that had we invested in people over prisons, my husband wouldn't be here today."

Rather than talk about prisoner reentry—how to help those who've spent time in jail or prison reacclimate to the world outside—Wilson said she wants to talk about "no entry," i.e., "that people never enter the system, that we stop feeding this system of mass incarceration. Stop punishing people for self-medicating trauma with drugs and alcohol, stop punishing people for mental illness." Theses policies don't work, Wilson concluded. "The promise of public safety has not helped."

Other speakers at the summit—which was organized by the Center for American Progress, Koch Industries, and American Civil Liberties Union-backed Coalition for Public Safety—came to similar conclusions, albeit based on less personal circumstances. "We're spending more, getting less, and destroying communities in the process," said Rep. Jim Sensenbrenner (R-Wisc.).

Leahy complained that, "for three decades, Congress turned to mandatory minimum sentences to address every public safety concern." It hasn't helped. "We lost the war on drugs… let's admit it," said Leahy, who is ranking member of the Senate Judiciary Committee. Last year, the committee seemed poised to come together on the Smarter Sentencing Act, which would have cut mandatory minimums in half for some drug crimes and made the reduced crack penalties passed in 2010 retroactive. But "it was blocked by a handful of senators because they were afraid they wouldn't be seen as tough on crime."

Rep. Bobby Scott (D-Va.) also complained about the tough-on-crime imperative and spineless lawmakers. We've passed about one new criminal law per week for the past 30 years, many of which lack a mens rea requirement, said Scott. "No good politician has ever voted against a crime bill named after somebody," though these generally contain the worst sort of reactionary policies.

So have we really reached a criminal justice reform tipping point? Sen. Paul thinks the House "is more open than the Senate" to criminal justice reform efforts, but does see some areas where reform is realistic right now. These include passing a civil asset forfeiture reform measure and legislation to start testing the effect of police officers wearing body cameras.