Please, Hillary Clinton: Don't "Make History" on Your Own as President. Just Don't.

If you become president, think less about history and more about restraining the size, scope, and spending of government. 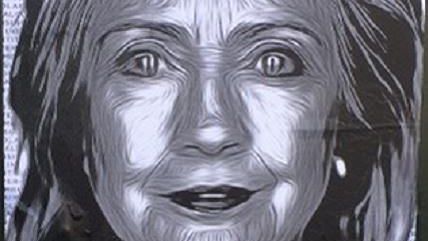 Although she's running for president, Hillary Clinton is hard to catch up with unless you're a surveillance camera at a Chipotle or a mega-donor to her campaign.

At a fund-raising event in Red Hook, Brooklyn—the very place that H.P. Lovecraft set a story about an unnameable horror—Hillary Clinton was allowed to be overheard saying:

"We're going to make clear, I'm not running for my husband's third term or for President Obama's third term," one person recalled her saying. "I'm running to make history on my own."…

Mrs. Clinton has generally embraced Mr. Obama and his policies, although she is likeliest to seek distance from him on foreign policy. As for Mr. Clinton, whose record she alluded to repeatedly in her 2008 presidential campaign, Mrs. Clinton has rarely mentioned him so far in this race.

When it comes to Obama's foreign policy, which she helped design and implement for too many years as Secretary or State, she really does needs to explain how hers will be different. This is especially pressing because no matter how shitty things have been for the past 15 years under Republicans and Democrats alike, they can always get worse.

When it comes to her husband's generally successful presidency, she also needs to clarify what pieces she still agrees with and why. Bill Clinton, for instance, had excellent free-trade bona fides, while she is pointedly dithering on supporting the Trans-Pacific Partnership (TPP), which would generally reduce trade barriers about the United States and 11 other countries, most of which are in Asia. Bill Clinton famously supported the North American Free Trade Agreement (NAFTA) over the objections of his own party. Though NAFTA was started under a Republican adminstration, Bill Clinton's support was crucial to its ultimate passage (so too was Al Gore's, whose utter demolition of H. Ross Perot in a debate hosted by Larry King of all people remains a highlight of semi-recent political discourse). It has been a good thing overall, just as freer trade is a good thing overall. Yet Bill Clinton was terrible on foreign policy, dispatching troops more often than Ronald Reagan did; he was terrible on trying to regulate Internet content and put "back doors" into telecom equipment that would allow unfettered government snooping, and much more.

Some free advice to Hillary Clinton: If and when you do become president, try to return the federal government to a common-sense set of rules not restricted to the following.

But most of all, Madame Clinton:

We need less "history making" from presidents and politicians in general. When muckety-mucks like you "make history," it's usually the rest of us who suffer. Whether it's dying in great patriotic wars to make the world safe for democracy or small, supposedly easy-to-contain regional conflagrations to stop awful crimes, things rarely work out as planned and often cause more problems than they solve. Passing massive new entitlements and regulatory schemes at home have a funny and predictable way of killing economic growth and screwing the young out of a future that was once so bright they were gonna have to wear shades. Attempts to enforce social, cultural, and economic equality routinely end up advancing only the interests of the groups controlling the doling out of favors.

In fact, what's great about America is that it is millions of individuals who get to "make history" however the fuck they want to. They might start a business that revolutionizes the transportation or computer industry, or they might teach poor kids or spend their time finding their own bliss in an art studio in their basement. But the point is that unlike the fiefdoms of old Europe and the would-be empires of the Middle East and Asia, America has at its best decentralized history making to its individual inhabitants. We do best when government at levels stops trying to regiment us into some version of the good life and instead creates a simple framework for us to have maximum freedom to pursue our own passion projects (i.e., our lives).

You get the picture. If you become president, think less about history and what you can do to restrain the size, scope, and spending of government which has metastisized since your husband left office, very little of of it for the good of America much less humanity. Channel the humility with which George W. Bush entered office but keep it real rather than embarking on some epic road trip of history-making that will inevitably be only slightly less hallucinatory, ruinous, and unreadable for future generations than the one undertaken by Raoul Duke and Dr. Gonzo in Fear and Loathing in Las Vegas.