His speech stresses economic issues, but he also makes it clear that he's a socially conservative hawk. 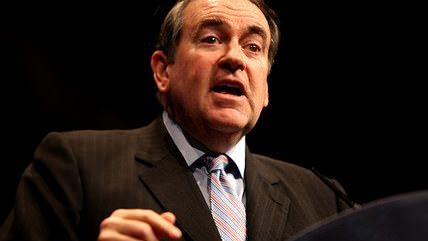 Former Arkansas Gov. Mike Huckabee officially entered the race for the Republican presidential nomination this morning, with a speech in Hope, Arkansas, that worked hard to appeal to populist blue-collar voters. The candidate led with economic issues, saying the country's joblessness rate is too high and its homeownership rate too low; he also decried stagnant wages, sympathized with the travails of "the bottom 90 percent," invoked the problems at the Veterans Administration, attacked the Trans-Pacific Partnership, denounced any entitlement reforms that would reduce promised payouts, said the War on Poverty has failed, and complained that Obamacare took money from Medicare.

After that Huckabee moved into foreign policy: denouncing Iran, sticking up for the Israeli settlements (he referred to the occupied territories as "Judea and Samaria"), suggesting that Obama can't tell the good guys from the bad guys, playing up the alleged threat of cyberwar, and promising to "conquer" jihadism. Then came a quick tour through social issues, covering abortion (he's against it), gay marriage (also against), and religious liberty (he worries we're on the road to "criminalizing Christianity"). He also said the judiciary is too powerful, made a plea for decentralizing government power, and said we should "expel" the Department of Education. And then, after a quick stop at the subject of border control, he was back to economics, calling for the Fair Tax, for less regulation on farmers, and for more manufacturing—and more energy production—at home.

All in all, while he certainly isn't soft-pedaling his socially conservative views or his hawkish foreign policy positions, Huckabee is clearly putting his focus on economic issues. Some of his ideas there would either keep government big or make it bigger, while others involve rolling parts of the state back; all of them are aimed at that blue-collar vote. And while I have a difficult time conceiving of a plausible scenario that ends with Huckabee getting the GOP nomination, it's not hard to imagine how a campaign positioned this way could affect the stands other candidates are willing to take.

Bonus link: Want to read more about Huckabee? Here are five things you need to know about him.