The Baltimore Police: More Equal Than Others

The special rights that police have written for themselves embolden abusers. 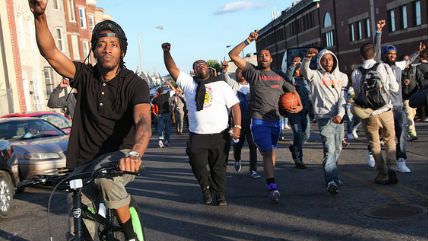 answers. The results of an internal investigation that was supposed to answer some key questions were handed to state authorities yesterday but the public will have to wait god knows how long.

That should be enough to set any self-respecting citizenry's teeth on edge, as the ongoing protests show it is doing! But what's truly infuriating is that all this delay is built into a process whose chief purpose is not to protect the public, not deliver justice but for the police's own self- protection.  Indeed, the entire investigation into Gray's death seems to be a giant exercise in ass covering, aided by what the ACLU calls one of the country's most extreme "law enforcement officers bill of rights."

Perhaps because of this lack of accountability, the Baltimore Police Department has amassed an impressive record of police brutality, I note in my morning column at The Week:

A Baltimore Sun investigation found that between 2011 and 2014, the Baltimore Police Department paid about $5.7 million in settlement or court-awarded verdicts to victims of police brutality (and spent an equal amount in legal fees), a figure that would certainly be much, much higher if municipal damages in most instances weren't capped at a measly $200,000. (Cleveland and Dallas have paid between $500,000 and more than $1 million to settle individual police misconduct cases.) Indeed, since 2012, 3,048 complaints have been filed against 850 BPD officers — or nearly 30 percent of its police force. In most instances, the accused officers remain employed because it is very difficult to fire a police officer without an actual conviction, thanks to the police bill of rights and other protections. And most cases don't reach that stage.