Will the libertarian-leaning presidential candidate shed the differences that make him interesting? 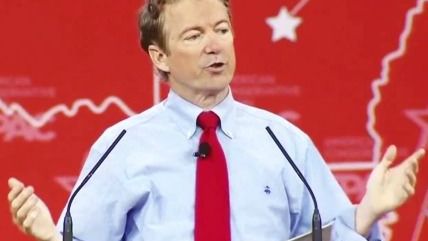 Rand Paul, who launched his presidential campaign on Tuesday, calls himself "a different kind of Republican," which at this point remains an accurate description. But in his eagerness to win primaries, the libertarian-leaning Kentucky senator runs the risk of shedding the differences that make his voice distinctive and worth hearing.

Paul seems keen to placate Republicans who absurdly insist that the current defense budget is inadequate, even though it amounts to nearly two-fifths of global military spending. But the Republican Party desperately needs a candidate who understands that "not every dollar spent on the military is necessary or well-spent," as Paul put it at the 2012 Republican convention.

In a related move, Paul has become notably more open to foreign intervention, endorsing war with the Islamic State in Iraq and Syria (ISIS) on the very same day that he wondered aloud whether the terrorist organization posed "a threat to our national security." To his credit, Paul still insists that military action must be approved by Congress, and he still opposes U.S. involvement in Syria's civil war (which makes you wonder how he proposes to "destroy" ISIS).

The Rand Paul of 2015 would benefit from a conversation with the Rand Paul of 2012, who declared that "we are in too many places, too often, and we don't seem to even know the reason—or where we will end up when we're done." Instead of learning from foreign fiascos, Paul said in a CNN.com essay, "both parties rush headlong into more places they don't understand."

Paul is trying to appease the GOP's social conservatives as well as its military hawks. Last month he told Fox News the idea of gay marriage "offends myself and a lot of other people," although he said the issue should be left to the states. He told the audience at a prayer breakfast that thinking "there would be some sort of other marriage" reflects "a moral crisis."

Similarly, at a 2013 lunch with evangelical pastors, Paul assured them he is no hippie. "I'm not advocating everyone go out and run around with no clothes on and smoke pot," he said. "I'm not a Libertarian. I'm a libertarian Republican. I'm a constitutional conservative."

Consistent with his respect for the Constitution, Paul argues that states should be free to legalize marijuana for medical or recreational use. Although he has not taken a position on whether that's a good idea, he is a lead sponsor of a bill that would carve out an exception to the Controlled Substances Act for people who produce, possess, or distribute medical marijuana in compliance with state law.

Paul's leadership on drug policy and criminal justice reform, which includes sponsoring bipartisan bills that would abolish mandatory minimum sentences, restore felons' voting rights, and limit the federal government's ability to take property supposedly linked to crime, sets him apart from the other presidential contenders. But since these issues have attracted interest from other Republicans (including Ted Cruz, who announced his presidential campaign two weeks ago), Paul probably will not feel a need to de-emphasize them during primary season.

Nor is Paul backing away from his criticism of warrantless surveillance, which resonates with conservatives as well as left-leaning civil libertarians. And no doubt he will continue to express concerns about executive power, concerns that Republicans tend to share when there's a Democrat in the White House.

The challenge for Paul is to remain different enough from other Republicans that there's a reason for him to run but not so different that he cannot win the nomination. I'm not sure those goals can be reconciled, but it will be interesting to see him try.