The bill, now before the state Senate, requires a criminal conviction to complete a forfeiture. 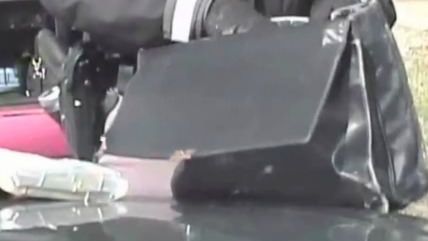 Last week the Virginia House of Delegates overwhelmingly approved a bill that would effectively raise the burden of proof for civil forfeitures by forcing the government to return seized property unless it can obtain a criminal conviction. The bill, introduced by Del. Mark Cole (R-Spotsylvania) and Del. Scott Surovell (D-Mount Vernon), passed by a vote of 92 to 6 and is now being considered by the state Senate.

Virginia received one of the lowest grades (a D–) in the Institute for Justice's 2010 review of state forfeiture laws. One reason was that police there can take property based on a "preponderance of the evidence" standard—i.e., by showing it's more likely than not that the property is connected to a crime. That's equivalent to any probability greater than 50 percent, as opposed to the much higher "beyond a reasonable doubt" standard for a criminal conviction. Under current law, the owner need not be charged with a crime, let alone convicted. Under Cole and Surovell's bill, the government could keep seized property only after a "conviction of the offense authorizing the forfeiture," which would make state forfeitures considerably more difficult.

That conviction does not have to involve the owner, however. Someone who uses an asset (a car or a home, say) in connection with a crime could be convicted, whereupon the asset would be forfeited, even if it belonged to someone else. Once a "substantial connection" between an asset and a crime is established, Virginia puts the burden on innocent owners to prove their innocence, and this bill does not change that.

The bill also does not change the allocation of forfeiture proceeds. In Virginia 90 percent of that money goes to law enforcement agencies, with the rest allocated to forfeiture-related administrative expenses. That arrangement warps police priorities by creating an incentive to target people based on the assets they own. Finally, this bill does not stop Virginia agencies from evading state limits on forfeiture by participating in the Justice Department's Equitable Sharing Program, which remains mostly intact despite the changes recently announced by Attorney General Eric Holder.

Still, Cole and Surovell's bill represents a major improvement, and it's encouraging that it was supported by all but a few delegates. Rob Poggenklass, an attorney with the ACLU of Virginia who is testifying in favor of the bill today, says "it has a good shot in the Senate if it gets out of committee."