Poll: 72 Percent of Americans Are Concerned About Public Pension Costs, 82 Percent Say Public Employees Should Contribute More to Their Own Retirement 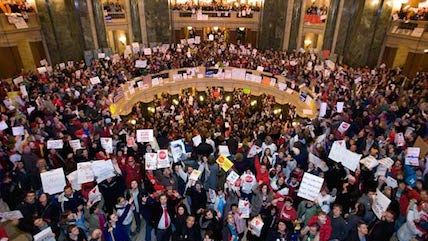 The new Reason-Rupe national telephone poll of 1,003 adults finds 72 percent of Americans are concerned their state and local governments may not be able to afford the pensions that have been promised to government workers. With those worries in mind, 82 percent favor requiring current public employees to contribute more towards their own future pensions and benefits.

Ultimately, sixty-six percent of Americans think shifting public employees from guaranteed pensions to 401(k)-style retirement accounts is a "good idea" because 401(k)-style accounts "give employees flexibility to take the plan with them from job to job and are less costly to taxpayers," while 29 percent say such a reform is a "bad idea" because "benefits would not be guaranteed and would depend on how well the employees and governments saved and how the market performs."

Reason-Rupe posed a series of questions to gauge how Americans weigh specific aspects of the trade-offs that governments may be confronted with and it is clear Americans do not want to cut services or raise taxes to pay for public pensions.

Nevertheless, when confronted with the hard choice of pension reforms or higher taxes, 81 percent of Americans say public employee contracts should be renegotiated to reduce pension benefits and current employees should contribute more to their own pensions, while 16 percent say taxes should be raised to fully fund public pensions at promised levels.

Likewise, when presented with the choice between cutting government services and pension reform, Americans choose the latter. Eight in 10 Americans favor renegotiating public employee contracts to reduce pension benefits and making current employees contribute more to their own pensions, while 15 percent favor reducing public services ranging from police and fire protection to recreation so that pensions can be maintained at current levels for past and present public employees.

Nearly three-quarters of Americans, 74 percent, are concerned their local or state governments will raise taxes in order to pay for public employee pension obligations in the future. Forty-two percent are "very concerned" and 32 percent are "somewhat concerned."

Retirement and health care benefits are highly valued by Americans. When considering whether to take a new job or stay at their existing job, 30 percent of Americans say benefits such as health care and 401(k) savings are the most important factor, followed by how interesting the work is (20 percent), earning the highest pay possible (17 percent), making a difference in society (13 percent), a pension (nine percent), and a flexible work schedule (seven percent).

The full poll is available online at:

The Reason-Rupe national telephone poll conducted live interviews with 1,003 adults on cell phones (501) and landlines (502) including 290 respondents without landlines, from January 29 through February 2, 2015. The poll's margin of sampling error is plus or minus 3.8 percent and was executed by Princeton Survey Research Associates International.

For more information and resources about the Reason-Rupe poll, please visit:

This is the latest in a series of Reason-Rupe public opinion surveys dedicated to exploring what Americans really think about government and major issues.  This Reason Foundation project is made possible thanks to the generous support of the Arthur N. Rupe Foundation.