Cards Against Humanity: Reason's State of the Union Version! 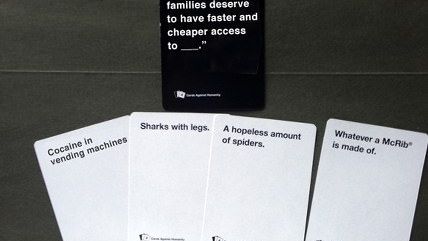 For those who are bored with the familiar rhetoric of the State of the Union speeches, we've integrated previous quotes with Cards Against Humanity to create a fun new spin on the game.

If you haven't played, it's very easy. Here are their official rules.

The game is simple. Each round, one player asks a question from a black card, and everyone else answers with their funniest white card.

We've added our own cards to the mix, which are guaranteed to provide more entertainment than the actual SOTU speech.

And we've also included some fun libertarian cards to add to the mix.

Download a pdf of the cards here and then tell us some of your funniest results.

Commenters: if you come up with enough good card ideas, we may use them in our next expansion pack!