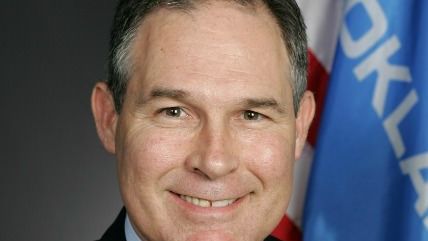 Last month the attorneys general of Oklahoma and Nebraska filed a lawsuit aimed at forcing Colorado to ban marijuana. In my latest Forbes column, I note that the effort has provoked criticism not just from anti-prohibitionists but from conservatives who correctly see it as an assault on federalism. Here is how the column starts:

Last week seven Republican members of Oklahoma's legislature, including five of the most conservative, publicly criticized that state's Republican attorney general, Scott Pruitt, for trying to reverse marijuana legalization in Colorado. "Oklahoma has been a pioneer and a leader in standing up to federal usurpations of power on everything from gun control to Obamacare," they wrote in a letter to Pruitt, who last month joined Nebraska Attorney General Jon Bruning in asking the U.S. Supreme Court to stop Colorado from regulating marijuana businesses. "We believe this lawsuit against our sister state has the potential, if it were to be successful at the Supreme Court, to undermine all of those efforts to protect our own state's right to govern itself under the Tenth Amendment to the U.S. Constitution."

The letter, spearheaded by state Rep. Mike Ritze (R-Broken Arrow), was a striking illustration of the split that the ongoing collapse of marijuana prohibition has created among Republicans, pitting their anti-pot prejudices against their avowed devotion to federalism.