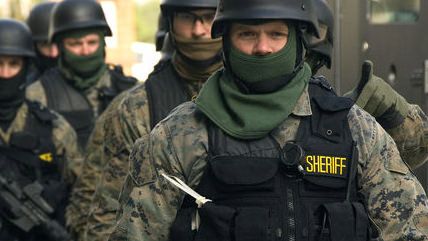 According to a recently released flyer, the St. Louis County and Municipal Police Academy is going to teach "upper-echelon law enforcement professionals" how to "WIN WITH THE MEDIA" (emphasis in original) after one of their subordinates shoots someone.

Talking Points Memo blogged about the flyer earlier today and noted some features of it that don't mesh well. The class comes in response to the shooting death of 18-year-old Michael Brown, which has sparked widespread, persistent protests against police brutality. The flyer describes the shooting as "tragic," but quickly moves on and assures that "training is… highly entertaining… and you'll have fun doing it!" (Again, emphasis in original). The class will cover issues like "'No comment' is a comment," the "media assault and battery" against cops, and how to "meet the 900-pound gorilla," whatever that is.  If you're not convinced yet, the academy promises, "There is NO PowerPoint!"

St. Louis isn't the only department trying to make a better name for itself on the Internet. New York City Police commanders apparently need to go back to school for "common sense" training after some serious mishaps like making fun of dead people and the backfired "#myNYPD" campaign that generated floods of images of police abuse.

But, getting better at social media and learning how to elusively say "no comment" without literally saying "no comment" when an officer shoots a teenager or chokes to death a father of six for allegedly selling untaxed cigarettes is not a solution, it's a way of avoiding a solution to bigger problems.

Reason has extensively covered the Pentagon's distribution of surplus military gear that breeds in local law enforcement a "must use" impulse for things like sniper rifles and grenade launchers, and mindset of "if you don't want to get shot… just do what I tell you." Reason TV caught a glimpse of troublesome policing at the Michael Brown rallies, where protesters discussed their own encounters with police harassment and abuse. And, the cops who responded to those protests didn't make their case much better by putting on body armor and driving armor-plated vehicles that made them virtually indistinguishable from ground troops in Afghanistan.

St. Louis' top cop is still unconvincingly defending this approach to policing, so we'll have to wait until after the class is over to decide if the pig's new lipstick suddenly makes it sexy.