The latest Reason-Rupe poll finds the public supports efforts to curb corruption in political elections but opposes methods that may infringe on free speech in the process. 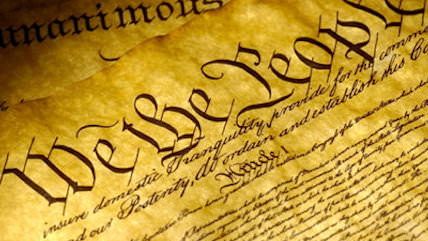 On Monday, Senate Democrats voted to advance a constitutional amendment that would allow Congress to regulate money raised and spent by candidates. It would also effectively overturn the Citizens United ruling and allow Congress the ability to restrict individuals, groups, corporations, and unions from using their resources in ways that Congress believes will influence elections:

"Congress and the States may regulate and set reasonable limits on the raising and spending of money by candidates and others to influence elections."

Background is useful here: The Citizens United case determined whether it was constitutional for the McCain-Feingold campaign finance law to prohibit—with threats of fine and imprisonment—a small non-profit group from airing a critical documentary about Hillary Clinton within 30 days before a Democratic presidential primary. Ultimately, the court ruled such bans on independent expenditures by corporations, labor unions, nonprofits, and associations violated the First Amendment.

In oral arguments before the U.S. Supreme Court, the Obama administration lawyer arguing the case conceded that in order to regulate money and electioneering, this necessarily gave Congress the power to also ban Internet videos, political pamphlets and books if businesses, unions, or non-profit interest groups paid for them.

The logic behind this argument is clearly troubling since the First Amendment of the U.S. Constitution explicitly protects against this very thing: "Congress shall make no law…abridging the freedom of speech, or of the press."

One might reasonably ask why the act of regulating independent spending during elections could infringe on free speech. Sen. Ted Cruz (TX-R) provides some explanation as for why:

"Speech is more than just standing on a soap box yelling on a street corner. For centuries the Supreme Court has rightly concluded that free speech includes writing and distributing pamphlets, putting up billboards, displaying yard signs, launching a website, and running radio and television ads. Every one of those activities requires money. Distributing the Federalist Papers or Thomas Paine's "Common Sense" required money. If you can prohibit spending money, you can prohibit virtually any form of effective speech." [emphasis added]

To combat concerns that the proposed measure could infringe upon speech, its sponsors added Section 3 stating that the amendment should not be allowed to "abridge the freedom of the press."

Notice that speech is not mentioned. This suggests that only those who Congress confers the status of "press" receive protection. It's worth remembering that recently Congress has defined the press as only those meeting very specific criteria. For instance, Sen. Chuck Schumer's media-shield law explicitly did not cover bloggers or anyone not considered a "covered journalist." He even admitted a "covered journalist" might not even include journalist Glenn Greenwald who reported Edward Snowden's revelations about the NSA's domestic surveillance programs.

Cruz has provided a list of potential activities the proposed constitutional amendment could potentially allow Congress to ban:

While today no one is arguing to ban the aforementioned activities, it still remains unclear how the amendment would ensure the law couldn't be used to prohibit them.

Section 2 of the proposed amendment does say that Congress "may" distinguish between regular people and corporations, but it certainly doesn't guarantee to individuals, nonprofits, and other groups that their First Amendment rights won't be infringed.

Therefore, the burden of proof stands squarely on the shoulders of Congressional Democrats to explain why giving Congress this expanded authority could not lead to banning political books and pamphlets as the Obama administration's own lawyer once said campaign finance laws could.

In a Politico op-ed, Sen. Chuck Schumer and Rep. Ted Deutch argue Cruz is wrong and promise their proposed constitutional amendment "will not infringe on citizens' First Amendment rights." But they don't provide any evidence or explanation for why it won't. Instead, they argue that efforts to curb the power of rich people spending in elections will offset costs to the average individual created by their proposed amendment. Their op-ed gives the impression to readers that perhaps the only check on Congressional authority would be a promise of goodwill, and voters are asked to trust their political leaders to know what's best.

So ultimately the debate rests on this fundamental question: Can Congress actually regulate money in politics without necessarily infringing on speech, or does speech often require money be spent in order to actually disseminate the communication to a mass audience? The public's support for such an amendment ultimately hinges on the answer to this question.

The latest Reason-Rupe poll sheds some light on this question, finding that 57 percent of Americans would support a constitutional amendment that "allows Congress and state governments to regulate campaign contributions to and spending by candidates for office," while 36 percent would oppose. This is actually a bipartisan affair—59 percent of Democrats, 58 percent of Independents, and 54 percent of Republicans would all support such an amendment—including 57 percent of tea party supporters.

However, fully 75 percent of all Americans would oppose such an amendment if it "also allowed Congress and states to regulate activities by individuals and groups, such as blogging or publishing a book that support or oppose a political candidate." Only 15 percent would continue to favor such legislation.

In sum, the public supports efforts to reduce the effect of money in elections, but will not tolerate costs to speech if those are required.

Schumer and Deutsch ask the public to conduct a "balancing test" when considering the costs and benefits of the First Amendment. But they fail to explain how their amendment's benefits will offset the costs to free speech.

It is clearly troubling to think that "nefarious" roving billionaires are buying elections and crowding out the voices of average Americans. But if it were so easy, then why didn't Republican billionaires succeed in 2012 after committing hundreds of millions to defeat Democrats? Why despite billionaire Tom Steyer's commitment of $100 million to elect members to combat climate change, has there not been significant legislation to that end? Why despite Meg Whitman's $1.4 billion net worth and spending $140 million of her own money in 2010 did she handily lose California's gubernatorial election?

The answer seems to be that money cannot buy people's hearts and minds; the American people are not sheep. Voters may favor efforts to reduce the effect of money in elections, but when it comes down to it, Americans value their speech over iterative attempts to control the flow of money.